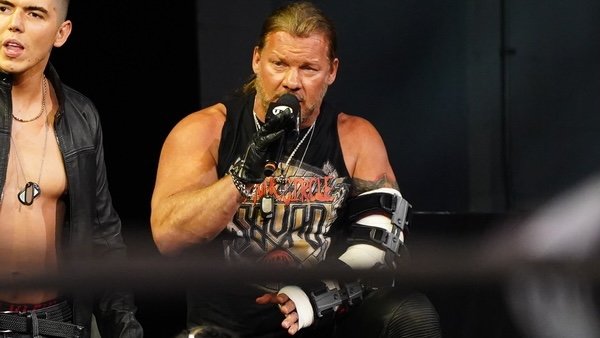 Renowned professional wrestling journalist, Dave Meltzer, has noted in this week Wrestling Observer Newsletter that Chris Jericho suffered a dislocated shoulder during the fall he took off the cage at Blood & Guts.

Meltzer noted that the AEW star would be out for 4-6 weeks, however presumed that he would still be involved in the Stadium Stampede match set for Double Or Nothing. Melzter stated “I presume he’s working Stadium Stampede based on the television angle but otherwise he’s out four to six weeks.”

On the latest episode of his podcast, Chris Jericho did comment on the bump he took off the cage during the Blood & Guts match, and hinted that his arm was indeed injured.

In full Jericho said “I told Max to give me a shove. I need to feel something so I can take a little bit of a pushback. I stepped back. I thought this bump would go by fast, but I just kept looking at him, and looking at him, and looking at him as I fell. Then I landed. Of course, it takes the breath out of you. Trust me, I’ve seen a few people bagging on the fact that it was a crash pad. Once again, no crash pad. It was cardboard boxes. I don’t give a sh*t if it was a crash pad. It’s one of those things that we’re doing that. Are we qualified to be stuntmen? I’ve never gone to stuntman school, but just 30 years of being in the business and you just go for it. You absolutely just put your caution to the wind and you go for it. It felt great. Obviously it hurts. You’re paying the price, but I could move my arms and legs. I wasn’t dead or knocked out. For me, my neck is kind of hurt. My arm is a mess. I really did hurt it somewhere. I don’t know if it’s a dislocation or what it may be, but we’ll get through it.”

Jericho also commented on the fan criticism the bump received as he said “It was only later on when I started hearing people thought the fall was on a crash pad and it didn’t look great. For me, I watched it back and I thought it looked amazing. The thing that was really scary, if you watch it back, I barely missed hitting my head on the lights on the back of the stage. I went so far back that I almost overshot everything. Once again, everybody in the business knows how dangerous this can be, how terrifying it is, and just the margin for error is so slim. There’s some hardcore wrestling fans that were bagging on it, and that’s fine. You have the right to bag on it. Out of the 1.3 million people that watched it, like I said, if 3.000 didn’t like it, that’s a very small percentage. Most people thought it was crazy, as did I.”

Thank you to WrestlingNews.Co for the transcription of the Talk Is Jericho podcast