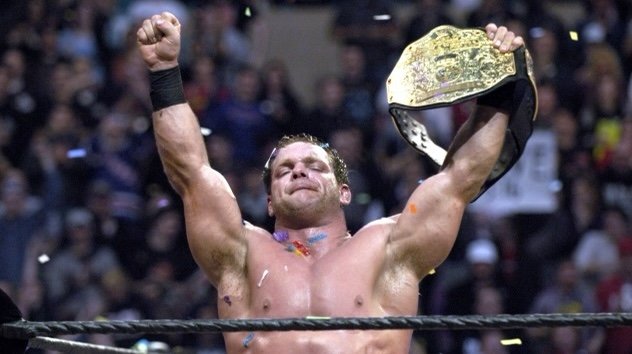 The latest episode of ‘Dark Side Of The Ring’ detailed the infamous WCW & NJPW ‘Collision In Korea’ event.

During the documentary, Scorpio revealed how Benoit, who killed his wife Nancy and his son Daniel in 2007, talked him out of stabbing Road Warrior Hawk.

The incident started with a fight on a bus, where Scorpio punched Hawk several times.

“It all started out with, prior to even going to North Korea, I had heat with [Ric] Flair because of an incident that happened overseas. One of his trips that he had booked, I got into some trouble and I felt like Flair was messing with me and I got fired from WCW. I don’t give a damn what he says, I still feel that to this day, it’s because of him. I let it build up seven or eight years and I’m still holding a grudge against someone that I think is the cause of me getting fired. Now, we’re all in North Korea. We’re going to all these sites and Hawk was riding with Flair. Hawk decided that, this day, he wants to ride with us. He comes to the bus and Flair comes out of the hotel. We’re all on the bus and Flair is looking around and Hawk goes, ‘He looks like he’s looking for somebody, maybe he’s looking for me and wants me to ride with him again,'”

“”Fuck that pussy. Let me ride by himself.’ Hawk said, ‘What did you say?’ I said, ‘You didn’t hear me? I said fuck that pussy, let him ride by himself. What part didn’t you hear? Was it fuck him, let him ride by himself, or was it the pussy part?’ He got mad about it, came back there, and called me the N word. He swung, he missed, I hit that motherfucker about five or six times and I was wearing his ass out. He’s bleeding from his face and all this, the Japanese boys grab me and I fall down into the seat. They’re holding me down and he’s trying to punch me. I’m ducking and dodging and he can’t hit me. I jumped on him, stuck my finger in his eye and I was on my way out with his eye. I had his eye halfway out of the socket. The Japanese boys jumped on me and we kinda got up. I ripped open my shirt and I gave him a straight kick right in the face to back him up. That slowed him down and the boys had enough distance to get between us and calm us down. He gave me his best shot and if that’s his best shot, you’re in trouble.”

“We make our way out of the temple and go down the stairs. I go up to Hawk and say, ‘We’re supposed to be over here on a peace treaty and we’re acting like fools and fighting amongst each other.’ He walks three steps in front of me, turns, and swings as hard as he can. He hits me, I don’t go down, I look at him like he’s crazy, and jump after him. The Japanese boys grab me, snatch me out of the air, and I start going off. ‘You fucking pussy, that’s all you got? I’m gonna kill you.’ I’m thinking street smarts. I’m gonna get him and I’m gonna hurt him,”

“We had a special steak dinner and they had the stainless steel chopsticks. I took a pair to eat with, dropped one, put it in my pocket, grabbed another, did the same thing. Me and Chris Benoit shared a room and he’s looking at me. I open the windowsill and pull out the chopsticks. I’m sharpening the chopsticks to bring them to more of a point. ‘What are you doing?’ ‘I’m making a shiv. I’m gonna stab that motherfucker.’ Chris is like, ‘Don’t do that, you don’t want to do that. If you kill Hawk over here, you’ll be here the rest of your life,”

Scorpio then recalled his final confrontation with Hawk, which led to an apology.

“Everyone is going down to dinner, I go around the corner and it’s me and Hawk. We’re face-to-face. I’m like, ‘You want to finish this now?’ He pushed the button for the elevator and I turn and back into the elevator to keep my eye on him. I got my shank with me. He gets into the elevator and he’s not saying anything, we’re just looking at each other. All of a sudden he says, ‘I ran out of pills, I have no steroids, I have no smoke, nothing. My nerves got to me, I was upset.’ I said, ‘I accept your apology, but if we get back to Tokyo and you still want to finish it, we can finish it.’ We ended up squashing it in North Korea, got to Japan and I was ready. It never happened, but he got an ass-whooping and learned that Scorpio and the one to mess with, I’ll tell you that shit,”

Thanks to Fightful for the transcription. You can watch Dark Side Of The Ring on VICETV.