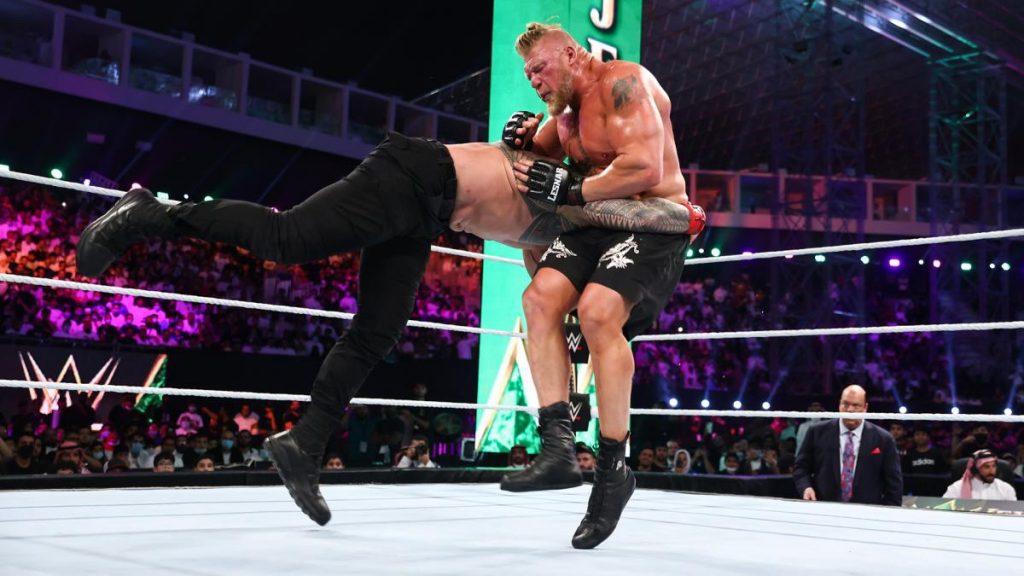 Brock Lesnar is looking for retribution against Roman Reigns after his loss at Crown Jewel.

The main event of Thursday’s Crown Jewel saw Roman Reigns successfully defeat Brock Lesnar to retain his Universal Championship, however not without help from The Usos, who hit Lesnar with double Superkicks while the official was down, allowing Reigns to cover him for the victory.

Prior to the match, reports emerged implying that Lesnar wouldn’t be making another appearance for WWE for the rest of 2021, however Lesnar may be showing up at least one more time before the year is over.

As noted on WWE’s social media accounts, Lesnar was leaving Saudi Arabia when he said ‘the moment I arrive at SmackDown, I will beat Roman Reigns senseless’.

This carries several meanings, as Brock could be implying that he will be showing up on Friday’s SmackDown to confront the Tribal Chief, or it could mean that he will next time he comes to the Blue Brand, which might not be until next year.

Lesnar is currently being advertised for January’s Royal Rumble, which is set to take place from The Dome at America’s Center in St. Louis, Missouri on Saturday, January 29 2022.

This Friday’s SmackDown will be the first episode with WWE’s updated rosters as a result of the Draft, which could mean fresh challengers for Roman Reigns’ Universal Championship.

Would you like to see another match between Roman Reigns and Brock Lesnar. Drop your thoughts in the comments below, or over on Instagram.