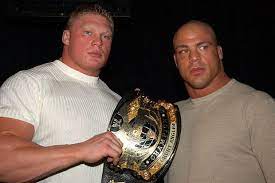 Kurt Angle revealed that Brock Lesnar wanted to join TNA after leaving WWE. Lesnar even called Kurt Angle and said that he would like to join if he could get same wages as Kurt.

Brock Lesnar left WWE after his match against Goldberg at WrestleMania 20 in 2004. He then went on to wrestle in Japan before going to UFC and eventually making his WWE return in 2012.

But WWE Hall of Famer Kurt Angle has revealed on his podcast The Kurt Angle Show, that Brock allegedly wanted to join TNA around 2007. TNA was going places around that time and Kurt recalled how Lesnar approached him and asked to help him join TNA.

“Okay, Brock calls me. He is not in the WWE. He says, ‘Listen, man. Can you get me in TNA?’ I probably shouldn’t even be saying this now. But you know what? Brock doesn’t care. He said, ‘Hey, what are you making?’ And I said what I was making. He said, ‘If you can get me that, I’ll come.’ I approached TNA, and they said, ‘No, we’re not going to give him that kind of money.’”

When asked why Lesnar couldn’t join TNA, Angle believed it was due to money issues.

“I think they were at the top of their budget, where they couldn’t really give any more money out. I was making a lot of money. Sting was making a good bit of money, and then you had a bunch of guys on the roster. You know, TNA, the Carter family funded it for a long time, and then TNA started making their own money, but it just wasn’t enough to bring in another guy for seven figures a year. I don’t think they were capable enough to do that.”-h/tsportskeeda