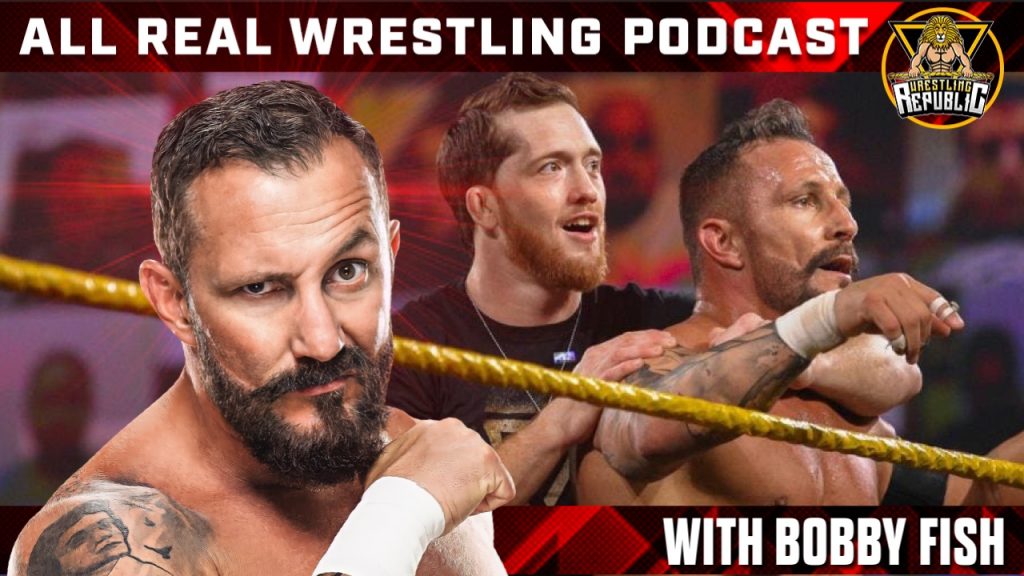 Bobby Fish, Former Member of the WWE roster has decided to have the first sit down interviews with our very own Eric Novak on the all real wrestling podcast about multiple topics from his harsh injuries and Amazing NXT Moments, all the way to his phenomenal return to the independent scene.

When talking about his past with NXT in one of the most dangerous structures in wrestling today known as War Games. When asked about his feelings going into the match he then stated.

“I Grew up being a fan of WCW War games matches with the Four horsemen and sting etc and how they were legendary for these war games matches as was Hunter and Shawn so for them to bring this back meant the world to us. As the Undisputed era has been in all of them when it comes to War Games there is none with the Undisputed era. But that’s so and I hate to say it but humbling and for that I’ll be endlessly thankful to Hunter and Shawn for that because now that a kid gets to see the war games matches like how I did as a kid.”

After this Eric would Follow up with a question asking about the special war games gears and how he felt about it from the first war games to the last.

“We wanted to make it special each time we went into the war games matches like the second one we did the camo because we were thinking of war. We always put our ideas out there and every year after we just decided to do something special each time and I feel that gear at the end of the day is all about the spectacle and as a fan I always loved those little details so I wanted to check that box off for them as well. “

Since it has been a few weeks since Adam and Bobby were in the same company many people wanted to know their relationship even in different places at the time.

“Um yeah, I mean  you know it’s no secret the four of us are legitimately close, so um whether we work for the same company or not we all still um communicate with each other so yeah there’s been conversations between Roddy and me and Adam and Kyle or Kyle and I and Adam, Roddy and I. You know those conversations never end like I mean they’re my friends so yeah and I just want to see success come to each of us and everybody to be happy and I know from me from what I’ve seen of Adam on AEW so far he looks happy and the conversations we had have confirmed those suspicions that he is happy and that’s what makes me happy for him for my friend.”

To end this article Novak talked to Bobby about his future and what’s to come seeing how the forbidden door is wide open and plenty of opportunities are out in the open especially on the independent scene such as GCW,MLW, and Etc. and this is what he had to say.

“As all the options come through with different companies I think I’ll have a look around and choose what best works for me as It feels like I’m in the driver seat and pulling all the strings on where I end up.”

You can watch the full video below: