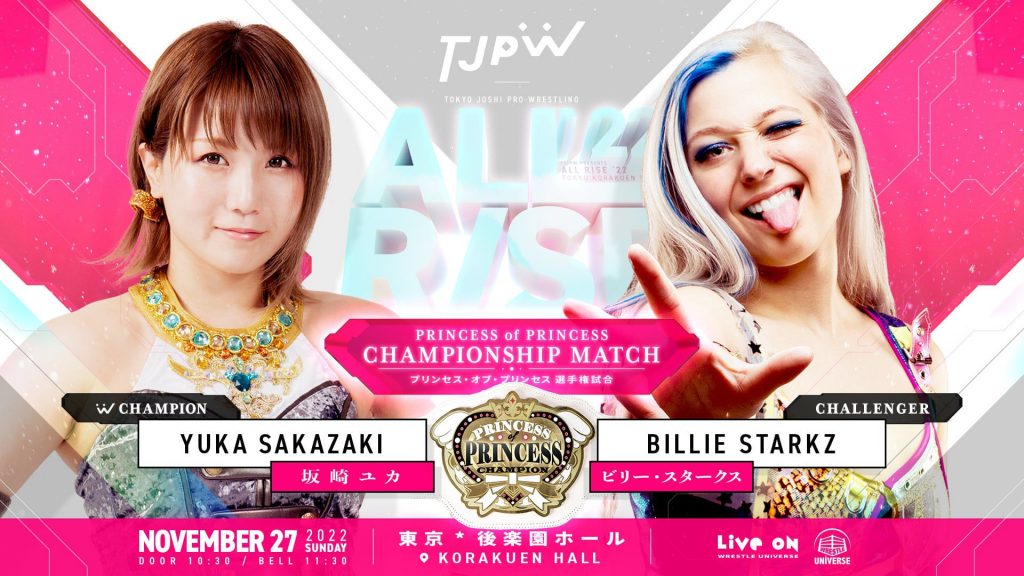 As noted recently on social media, Yuka Sakazaki will be defending the TJPW Princess of Princess Title against Billie Starkz.

“The Magical Girl” Yuka Sakazaki made history during last month’s TJPW WRESTLE PRINCESS III, where she defeated reigning Champion Shoko Nakajima to win the title for the third time.

After tying Miyu Yamashita’s record, Yuka Sakazaki has yet to make her first title defense. About this, TJPW had previously announced that “The Magical Girl” will be defending her title against a debuting American opponent.

After many days of rumors and uncertainty, TJPW have finally revealed that Yuka Sakazaki will be facing the young rising star Billie Starkz at the upcoming ALL RISE ’22 event, on November 27th.

Via Twitter, TJPW stated: “[IT’S OFFICIAL] ALL RISE ’22 Nov. 27 The challenger to Yuka Sakazaki’s Princess of Princess Championship is @BillieStarkz! Huge opportunity for the 17-year-old prospect on her first Japan tour – will she grasp the Japanese Dream at TJPW?”

Who Is Billie Starkz & Where Can You Watch The Event?

As mentioned before on TJPW’s tweet, Billie Starkz is a 17-year-old wrestler that will be making her first Japan tour. Even though she’s been a pro wrestler for just 4 years, Billie Starkz has competed in many well-known indie promotions.

Some of the names on the list are Game Changer Wrestling (GCW), Black Label Pro and Paradigm Pro Wrestling.

As for her debut match in TJPW, the event will stream live on the company’s official streaming platform, Wrestle Universe. In addition to TJPW content, you will be able to see the best from DDT, NOAH & Ganbare Pro Wrestling.

There is not any official information about the other matches on the event’s matchcard. However, make sure to stay tuned to Wrestling Republic to be updated on this.