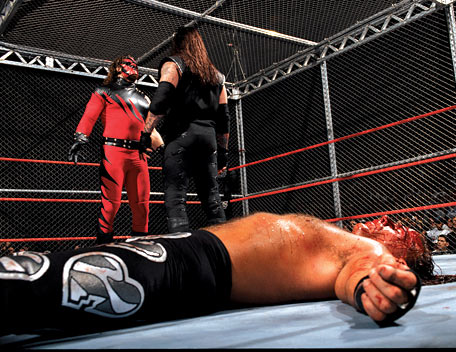 With Hell in a Cell right around the corner I look back at the ppv with the first ever Hell in a Cell match with Shawn Michaels vs Undertaker Badd Blood 1997. We all remember the main event but how will the rest of the show shape up.

GOOD: This show started off the legion of doom vs The Nation of Domination. Ken Shamrock was supposed to be in the match but the raw before this show Farooq spinebustered Ken Shamrock taking him out of action. Hawk grabbed a mic before the match and said that they will be taking on The Nation of Domination alone. The Nation Of Domination wins after Farooq distracts the ref with Rocky Maivia getting the win for there team. Rocky played the heel role perfectly in this match leading to a good opener.

TERRIBLE: Max Mini and Nova took on Mosaic and Tarantula. This just was a straight up a bad match. Nothing enjoyable with this match. So many noticeable and bad botches. This was just not good in the slightest.

TERRIBLE: After that match there was tag team action when The Godwins took on The Head Bangers and this again wasn’t a great match. There was one botch that almost broke one of the godwins neck. This wasn’t good. There were multiple botches but that one botch really didn’t look good. This match was boring and the parts that weren’t boring they botched

RESULT: The Godwins win via pinfall

AVERAGE: After two not so great matches we get an intercontinental championship match between Owen Hart vs Farooq but Stone Cold comes out before the match starts and he’s ringside for this match. This was an enjoyable short match with an ending that was really great. Stone Cold hit Farooq with the intercontinental championship then he threw the belt in the ring “presenting” the title to him. Stone Cold wanting to beat Owen Hart for the belt and getting revenge was great. The only problem was that the match only went 7 minutes.

AVERAGE: The Disciples of apocalypse faced Los Boricuas next and this match was so boring. It was even more boring The Godwins vs headbangers. Like in the ring there were not really any noticeable botches but the action in the ring still wasn’t good.

RESULT: The Disciples of Apocalypse wins via pinfall

PERFECT: The Next and Final Match of the night was The First ever Hell in a Cell match between Undertaker and Shawn Michaels. This match was such a good way to introduce this stipulation. It was an absolutely perfect match with one of the best endings of all time introducing Kane. For the very little about of people who haven’t seen this match yet watch it.

This card is the definition of a one match show.  This is an absolutely skippable show. The undercard was awful but the main event seriously did save this show. The MVPs of this show would most definitely be Shawn Michaels and The Undertaker.