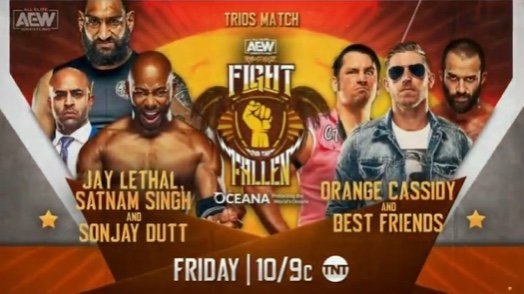 Multiple Matches have been added to Friday’s Rampage Fight For The Fallen.

On the July 29 episode of AEW Rampage, new J.A.S. member Anna Jay will face Ruby Soho in a continuation of the Jericho Appreciation Society vs. Eddie Kingston feud. The reason for this match is that Jay last week assaulted Soho along with Jericho’s faction.

The match is an addition to the three others that have already been revealed
Additionally, A.E.W. revealed that Claudio Castagnoli would speak to the audience on the show. At ROH Death Before Dishonor on July 23, Castagnoli defeated Jonathan Gresham to capture the ROH World Championship.

The trio of Jay Lethal, Satnam Singh, and Sonjay Dutt will face off against Best Friends (Orange Cassidy, Trent, and Chuck Taylor) in a six-man tag match on the July 29 episode of A.E.W. Rampage. The last time Dutt competed in the ring was on December 28, 2017, when he faced Jonathan Gresham at a NOVA Pro Wrestling event.

Dutt stated that there was “zero possibility” he would ever return to the ring during a recent episode of A.E.W. Unrestricted.

Dutt joined AEW earlier this year as a producer. Dutt previously held the same position in T.N.A. and WWE before joining the company. Dutt recently discussed his decision to join A.E.W.