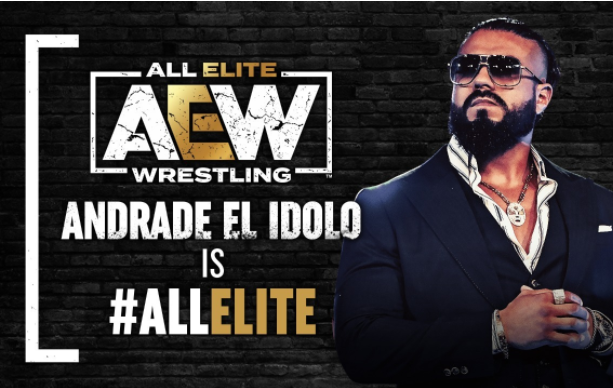 On a seemingly basic segment in which Mark Henry was able to address the AEW fans for the first time, it was quickly derailed by the screeching voice of Vickie Guerrero. As boo’s rained down, the name Andrade El Idolo was announced, and the former WWE and Mexican star made his first ever AEW appearance.

“I used to say I am the face of Latinos… but today I am saying I will be the new face of All Elite Wrestling.” -Andrade El Idolo

It is very cool to see another recently released superstar make a huge impact early on in the next chapter of their career. Not to mention the significance of his apparent manager. To see Vickie accompanying the new face of LATINO, is as nostalgic as it gets.

Known as “Andrade “Cien” Almas” and earlier in his career “La Sombra”, Andrade is another super excellent addition to AEW, and more importantly the wrestling scene outside of WWE in general. He has already reached many accomplishments, so should be a big draw.

This is a very exciting layer to the wrestling world as in August, Andrade has a huge match scheduled against Kenny Omega on AAA’s Triplemania show. His entrance to AEW could create the chance for an awesome build, as well as possible working relationships more often.

Arguably of all the releases that have been seen recently, this is the most important. Not only is his talent special, Andrade voluntarily left WWE to make bigger waves, and it looks like he’ll be doing just that!