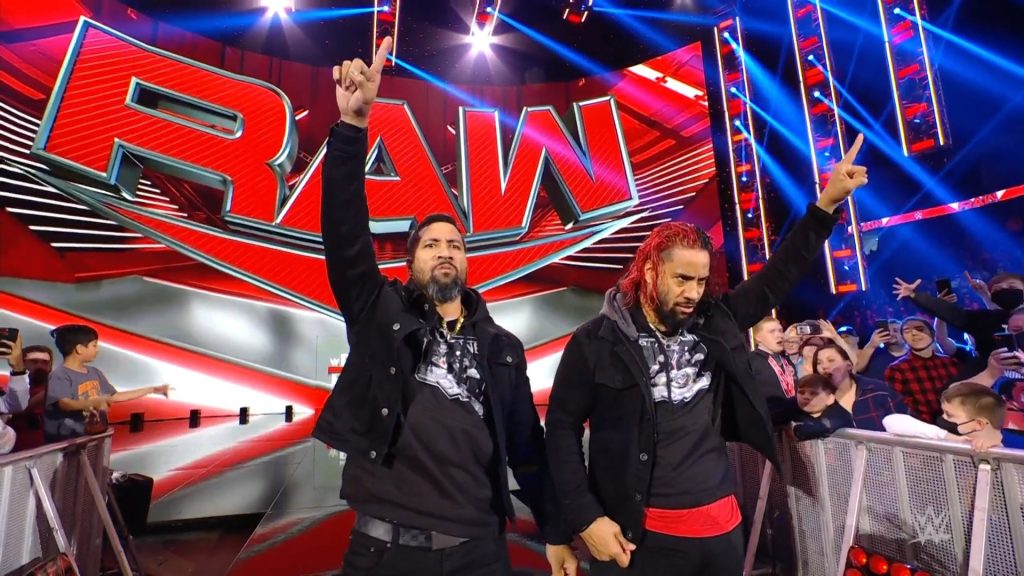 Last week’s episode of Raw, for the most part, was an enjoyable show. The opening segment with Brock and Lashley was great and matches like Big E vs Rollins and the women’s triple threat were highly enjoyable. The first half of the show was very good, however the second half was definitely hit or miss. Will tonight’s show be more consistently enjoyable throughout? Let’s find out!

AVERAGE: The show kicks off with the Raw Women’s champion Becky Lynch. Becky talks about how she revitalized the women’s division, causing legends to return for the royal rumble and building future stars like Doudrop. She says that she helped Doudrop become number one contender and people like Doudrop aren’t meant to be a champion. Doudrop comes out and says that Doudrop did everything on her own and tells Becky to stay out of her way. Bianca Belair comes out and officially declares for the rumble. Liv Morgan also comes out and also declares for the rumble. However, Doudrop has heard enough and demands for their tag match to start.

BAD: Immediately after we have Becky Lynch and Doudrop vs Liv Morgan and Bianca Belair. This match felt very rushed and Doudrop forgetting to tag in before going for the finish was a bad look. Post match, Doudrop hits Becky with a banzai drop.

AVERAGE: Backstage, Edge and Beth Phoenix are with Reggie and Dana Brooke. Beth praises Dana for her recent work as 24/7 champion, but she and Reggie have to run. Edge and Beth start talking when Beth is handed a note. The note is from Maryse, who wants to meet Beth in the ring tonight for a confrontation. They, of course, know this is a trap. They immediately run into Damian Priest, who asks for advice in the Royal Rumble match.

GREAT: Kevin Owens invites Seth Rollins onto the Kevin Owens show. Seth says that once he beats Roman at the Royal Rumble he’s officially bringing the title back to Raw. Owens also officially declares that he’s entering the Royal Rumble match. Damian Priest eventually comes out and wants both of them to shut up so they can get to the next match. I absolutely adore the chemistry between Rollins and Owens.

GOOD: Nikki A.S.H. Is interviewed backstage about turning on Rhea Ripley last week. She says that she was justified in her actions because Rhea dissolved the partnership first. She finishes by saying that she will be the people’s hero.

GOOD: Up next is Damian Priest vs Kevin Owens. This was a fun match and the first good match of the evening. The finish sees Owens vein an injury only to sucker Priest into eating a stunner for the win. Owens ends Priest’s undefeated singles streak in a good match.

MUST WATCH: Up next is the graduation ceremony for the new Raw tag team champions Alpha Academy. Gable puts over himself and his prized pupil Otis in an entertaining speech. Otis gives a short speech saying that he’s finally come into his own before Riddle comes out in a cap and gown of his own. He officially challenges Alpha Academy to a rematch for the tag titles, to which Gable accepts… on one condition. Chad says that if he and Randy can pass several academic challenges, they’ll get their rematch. Orton shows up and RKOs Gable out of nowhere while Riddle takes out Otis to end the segment. This was absolutely fantastic.

GOOD: Vince McMahon is backstage with Austin Theory. Theory puts over the fact he took out Finn Balor last month, but Vince says it’s not good enough he needs a real victory. He tells Theory to get a victory or else Vince is going to beat him up.

AVERAGE: Up next is Finn Balor vs Austin Theory. This was a decent match but nothing that great either. The finish sees Austin counter the Coup de Grace and hit the ATL for the win. Post match he beats down Finn some more and poses for a selfie.

AVERAGE: Rhea Ripley has an interview about her upcoming match with Nikki. She says that she never wanted to end the friendship with Nikki, but now she’s going to put Nikki in her place.

AVERAGE: Up next is supposed to be Rhea Ripley vs Nikki A.S.H. However, Zelina Vega and Carmella come out and berate Rhea, calling her a loser. They say that Rhea can’t win a title on her own anymore and that she has no one to cling on to. Nikki attacks Rhea and the match never officially begins.

AVERAGE: Reggie is backstage with Dana and is terrified at having to face Omos up next. Dana hypes him while Akira Tozawa, R Truth and Tamina are eating popcorn and watching. They soon follow.

AVERAGE SQUASH: Immediately after we gave Reggie vs Omos. Before the match starts Truth and company show up at ringside, only to get demolished by Omos. The bell rings and Reggie goes to attack Omos, but gets stopped quickly and subsequently pinned.

GOOD: Maryse is in the ring and invites Beth Phoenix to come out to talk to her alone, woman to woman. She assures her that The Miz is not here tonight and there are no tricks. Maryse says she’s out there to fix her husband’s mistake and tries calling off the mixed tag match at the Royal Rumble. She wants them all to be friends but Beth isn’t having it. They go to attack when Miz jumps out from out of nowhere. Edge, however, makes quick work of him. In the ring though Beth gets clocked by Maryse’s handbag and she and Miz escape. Maryse goes into her bag to reveal it was loaded with a brick.

AVERAGE: Backstage, The Street Profits and the Mysterios talk about the Royal Rumble and their upcoming tag match. A nothing promo but still decent.

AVERAGE: immediately after we have an eight man tag as The Mysterios and the Street Profits take on the Dirty Dawgs, Apollo Crews and Commander Azeez. This was a decent match but nothing that special. The finish sees Montez hit from the heavens on Apollo for the win. Post match the Mysterios throw the profits over the top rope. Immediately after Rey throws Dominik over the top rope as well, signifying the idea of the rumble where it’s every man for himself.

Result: The Mysterios and the Profits win by pinfall

GREAT: We get an excellent video package detailing the careers of Brock Lesnar and Bobby Lashley and everything they’ve done up until this point. This package was absolutely excellent.

AVERAGE: The Miz and Maryse are backstage and talk about embarrassing the Grit couple. They end the segment by making out.

AVERAGE: We get another therapy session with Alexa Bliss and her therapist. The therapist this time tries word association, but Alexa’s response to every word is Lily. This of course sets her off and the segment ends.

GOOD: Finally we have the main event as Seth Rollins takes on Bobby Lashley. This was a really fun main event, but in typical WWE fashion a great match has to end in a DQ. The finish sees Cedric Alexander and Shelton Benjamin attack Lashley.

GREAT: Post match, Lashley demolishes Cedric and Shelton. Meanwhile, Rollins is still in the ring when the Usos show up and attack Rollins to end the show.

Overall, Raw was enjoyable for the most part. The Alpha Academy segment was great and the KO show is always a lot of fun. The in-ring suffered in the women’s department, unfortunately with a very mediocre opener and a second match that never got started. Priest and Owens and the main event, however, made up for that. A fine show, but not as good as last week.