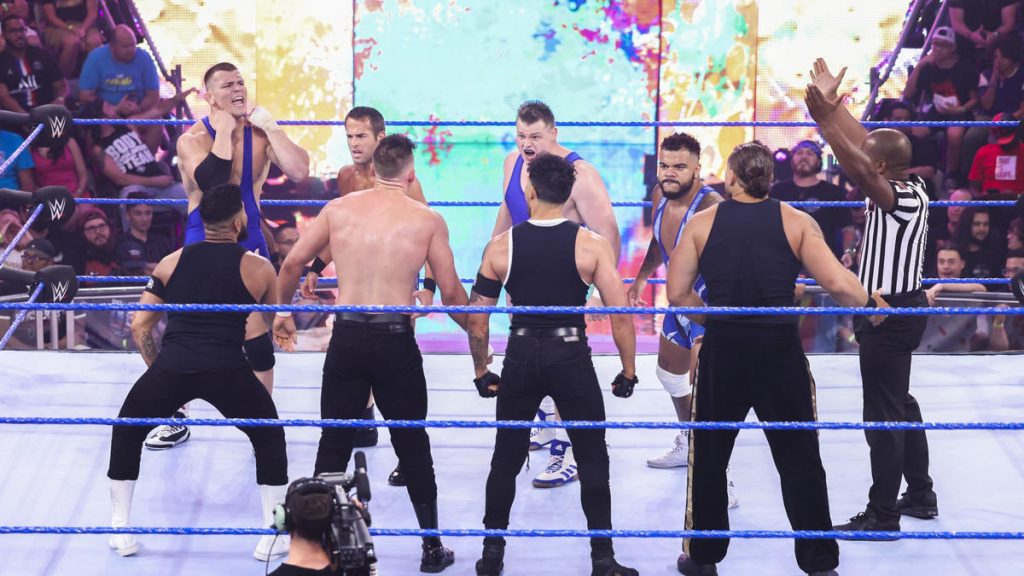 Overall NXT had a solid show with the three matches that got time to deliver, delivering. The atmosphere for the show was very solid with the build to NXT Heatwave starting tonight. We have Mandy Rose and Zoey Starks getting onto a collision course for the NXT Women's championship and Bron Breakker and JD McDonaugh going for the NXT championship. The Diamond Mine went into the main event a cohesive unit but a mishap may have continued the cracks within the group. The D’Angelo Family stand tall over the diamond mine in 8 man tag action. Andre Chase has to be given all the props for the crowd work and how truly over Chase U was for his match with Giovanni Vinci. The show flew by with the atmosphere being like it normally is, a hot crowd in the PC.

A Week removed from the triumphant return of Zoey Stark, we get to hear from the woman herself tonight after becoming number one contender. The two biggest factions of the NXT roster, The Diamond Mine and The D”Angelo Family go face to face in an 8 man tag match. Wes Lee faces the arrogant aussie Grayson Waller and Apollo Crews looks to get revenge inside the squared circle when he faces Xyon Quinn. All this and much more.

GOOD Zoey Stark Promo: Zoey talks about her journey, how she was told she would be out for over a year and how she wanted to beat that timeframe. Getting back four months ahead of schedule. She thanks the crowd for their support as she is now the number one contender. Toxic Attraction is in her way but Cora Jade’s theme hits as she comes out on the elevated platform. Cora says how Zoey stole her moment. Zoey says the championship Cora threw away wasn’t trash, Cora is the trash. Toxic Attraction interrupts with Mandy talking about how she only wins with tomorrow being her date of breaking Paige’s championship length. Gigi would then replace Zoey’s challenge to Mandy with herself saying she will put her back on the shelf.

Tony D”Angelo Shares some words for the diamond mine about their 4 on 4 match. Telling his family it’s time to crack some skulls.

GOOD Wes Lee Vs Grayson Waller: Grayson is finishing his entrance in the ring before Wes Lee gets a full entrance. Both men lock up and they trade control. Crowd are chanting Aussie A**hole. Grayson gets a nice springboarding armdrag before Wes Lee takes control with a roll up, double foot stomp and some arm drags to Grayson. Waller gets a nice big boot but Wes Lee gets a hurricanrana sending Waller to the outside. Both men trade counters before Wes Lee takes control of the match with a kick ringside. The show goes to commercial as Wes is sitting on the apron. Back from commercial Grayson has taken control of the match working on Wes, hitting a fireman’s carry spinebuster for a nearfall. Grayson taunts Wes grabbing him by his hair with Wes fighting back with a slap, forearms, and chops starting to attack Waller aggressively. Waller sets up for the stunner but Wes gets a tope through the middle and bottom rope. Wes was setting up the spiral tap before he got sent out of the ring from the top rope. A Hooded figure struck (revealed after the match to be Trick Williams) Wes Lee but he was able to just beat the count, Waller got the Rolling Stunner for the win. After the match Trick Williams was standing tall over Wes taunting him.

Results: Grayson Waller by Pinfall via Rolling Down Thunder Stunner

The Schism have a backstage interview as Gacy gets the interviewer to call The Dyad by their names Rip and Jagger. Gacy continues on as he says how the Schism’s message will continue next week as they want Cameron Grimes to join them.

Ariana Grace and Indi Hartwell have an argument backstage about the battle royal elimination.

SQUASH Apollo Crews Vs Xyon Quinn: Apollo enters and after commercial Xyon is finishing his entrance. Xyon Quinn starts the match in control and is able to stop Apollo’s comebacks before Apollo gets the comeback getting some clotheslines and some a nearfall on Xyon. Apollo climbs the top rope before hitting a crossbody, Xyon hitting a death valley driver then Apollo gets a backstabber and one handed spinebuster combo for the victory. Too short of a match to rate as anything other than a squash match.

In a backstage interview Mandy claims Gigi will injure Zoey and put her back on the shelf. Mandy ends up challenging Sarray after Sarray says she was in the UK and wants her shot.

Solo Sikoa says in a video that next week is Von Wagner Vs Solo Sikoa in a falls count anywhere.

NXT Heatwave in 3 weeks has Zoey Stark Vs Mandy Rose.

Results: Zoey Stark by Pinfall via “Feast your eyes” like knee strike.

Wendy Choo wakes up on the wrong side of the bed, promising Tiffany will see a different side of her.

ABOVE AVERAGE JD McDonaugh: JD starts in the crowd introducing himself to fans making threats to a fan eating popcorn, the time keeper, Wade Barrett and Vic Joseph before calling out Bron Breakker. They trade headbutts as JD is on his back holding his jaw. I found JD threatening people to be weird, maybe it was his delivery of it. Not too sure to be fair.

Chase U are having a backstage talk, as Andre Chase is getting ready for Giovanni Vinci. Nathan Frazer asked to be the honorary flag bearer for Chase U.

They recap the debut of Axiom in a comic book-like animation.

GOOD Andre Chase with Bodhi Hayward, Thea Hail and Nathan Frazer Vs Giovanni Vinci: Giovanni makes his entrance with Chase already in the ring. Andre and Vinci have an equal start, both getting the better of the other before Giovanni steals the Chase U flag and breaks it over his knee before Andre throws him into the ring post. Once back they show how Nathan Frazer gave his flag to Bodhi from the Chase U section. The Crowd was absolutely on fire for pretty much everything Andre Chase was doing in the ring. Andre got a nice uranage and the roof was blown off the place with the crowd serenading him with This Is Awesome chants. Andrew gets a catching brain buster before getting a near fall. Vinci went for the powerbomb but was reversed, going for the springboard, Andre caught him with a boot getting the final exam (butterfly powerbomb). Giovanni kicks out and ends up getting the victory. Vinci attacks Andre after the match before Nathan Frazer makes the safe for Chase U. The crowd was absolutely electric for this match and it was without a doubt a highlight of the show.

Diamond Mine have their pep talk in the diamond mine.

All Tag Teams in next weeks four way get videos of their word, with Katana and Kayden having a run in with Ivy and tatum. Elektra comes in talking s**t about the diamond mine and a brawl breaks out with all five women.

SQUASH Indi Hartwell Vs Arianna Grace: Indi Hartwell makes her entrance first before they go to commercial. Arianna enters after with the crowd visibly behind Indi. Grace is in control of the match, working on Indi in the middle of the ring. Let’s Go Indi chants/claps are being done to motivate Indi. Arianna stays in control of Indi, with Arianna trying to get the win with her legs on the ropes. Indi gets a quick big boot to win.

Von Wagner says he doesn’t give a sh*t about Sofia Cromwell going to be a model (Smackdown) and is ready to take the street fighter’s crown next week.

Kiana James puts on a powerpoint presentation about Nikkita Lyons. Saying she doesn’t fit the model of what a woman should be in this world.

GOOD Diamond Mine, Damon Kemp, Julius and Brutus Creed and Roderick Strong Vs The D’Angelo Family, Tony D’Angelo, Channing Lorenzo, Cruz Del Toro and Joaquine Wilde: Roderick and Tony start the match off with Tony getting the tag to Channing. Julius gets the tag and starts tossing Channing around in the ring. All 8 men have a standoff that ends in an all out brawl with D’Angelo trying to escape an ankle lock from Julius. Brutus then gets the cannonball off the apron which Vic Joseph ironically called a meatball. Once back from commercial the D’Angelo family gained control of Damon Kemp. After Julius gets the hot tag he has one of the best hot tags since the Cesaro hot tag. Julius and Roderick are taking guys out one by one before a mistake in the teamwork happens with Roderick Kneeing Julius. Tony gets the victory right after with the spinning neckbreaker.

Results: Tony D’Angelo by Pinfall via Forget About It on Julius Creed.

Gigi Dolin and Jacy Jayne have an interaction with Alundra Blayze outside of the arena. Alundra tells Toxic Attraction they have to fight for it in the four way next week.

Overall NXT had a solid show with the three matches that got time to deliver, delivering. The atmosphere for the show was very solid with the build to NXT Heatwave starting tonight. We have Mandy Rose and Zoey Starks getting onto a collision course for the NXT Women’s championship and Bron Breakker and JD McDonaugh going for the NXT championship. The Diamond Mine went into the main event a cohesive unit but a mishap may have continued the cracks within the group. The D’Angelo Family stand tall over the diamond mine in 8 man tag action. Andre Chase has to be given all the props for the crowd work and how truly over Chase U was for his match with Giovanni Vinci. The show flew by with the atmosphere being like it normally is, a hot crowd in the PC. Also, not to mention just how talented Julius Creed is with the hot tag he had in the main event. Woof!