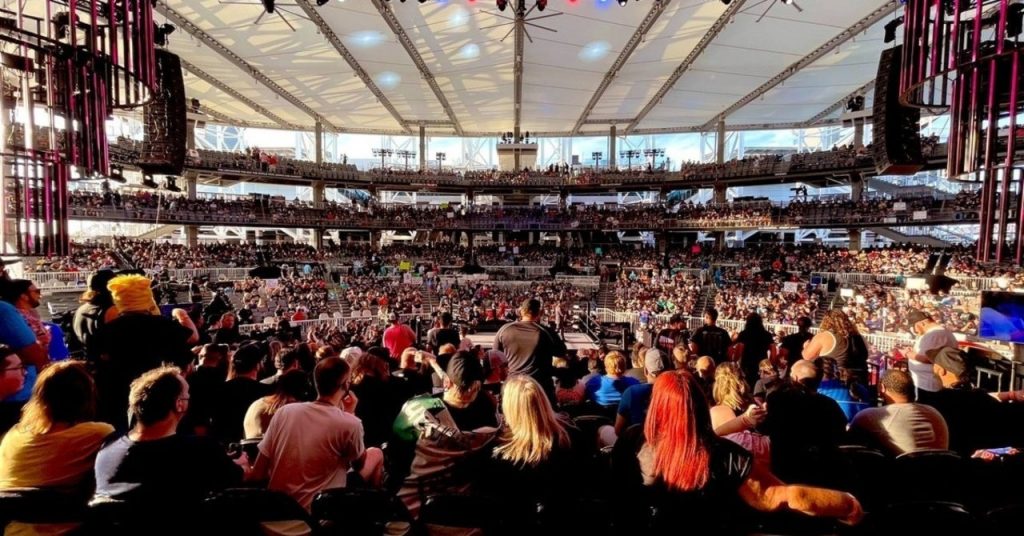 Tony Khan was interviewed by Mike Johnson of PWInsider earlier this week, where he spoke about AEW’s taping schedule once they return to the road next month.

Many have speculated what the taping schedule for AEW will be going forward, especially with their second weekly show on TNT ‘Rampage’ starting in August.

Khan revealed that in ‘hot’ markets, Rampage will be taped after Dynamite, such as at the Arthur Ashe Stadium in New York. However in other markets where the company feel like a four hours of wrestling would be too much for fans to sit through, Rampage will be filmed Live on a Friday.

The AEW President also revealed that Dark Elevation will be taped before Dynamite, while Dark will now be pre taped in its own venue which AEW are set to secure.

In full Khan said “No. It’s going to be different formats. It’s great questions you’re asking. I really appreciate it. And I’ll give you some scoops. I’ll break the news. With Rampage, there’s going to be some weeks rampage will be live and there’ll be weeks where we plan to tape Rampage after Dynamite, including here at Arthur Ashe stadium, where we will be filming also after. We’ll do Dynamite live and we’ll also film Rampage. And in some of the markets where we have these amazing crowds, I think it’s okay.

We can take advantage of it and give them Dynamite and Rampage. There’s also going to be times where we’re going to do a lot of live Rampages. We’re going to have a live debut. We’re going to do some great live episodes. The Go Home will be live for All Out at the Sears Center, and also we’ll be live for the Go Home in St. Louis and it’ll be great. We’ll also be… so it’ll be Rampage. It’ll be really, really special for us. I think it will be, sometimes we’ll do it after Dynamite. We’ll do Dynamite, then we’ll do Rampage. Sometimes if Rampage is not live, then that’ll be one taping.

Before Dynamite, we used to tape Dark. That’s going to change. I’m going to tape Elevation before Dynamite now. So it’s going to be a shorter Elevation and I may add matches that I’ll explain where I’ll add them from. I’m going to procure a venue for use to tape Dark and other content that’ll be great. And I’m really looking forward to this. I think it’s going to be tremendous and it will be where we’ll shoot Dark and we’ll do tapings. And it’ll be, as it’s been, it’s been a developmental situation and it’ll continue to be developmental. And it’s been great doing it all under one roof, all at one taping. And there’s been advantages, but there’ll be some advantages now to doing it as its own taping and being able to give 100% attention to these and not having also to think about Dynamite and soon Rampage and Elevation also.

I think Dark has been a great platform and now Elevation for developmental, nobody can deny it. Everybody’s, in the world of wrestling, is clearly paying attention to it because a lot of recruitment of people who come in and make appearances on Dark, there’s no doubt that those people seem to get a lot of tryouts in the world of wrestling and vice versa, to be honest. There’s a lot of people that have made appearances and done things in the world of wrestling, and I try to scout out and I’ve got a great, great group of people. It starts from the Young Bucks and Cody and Kenny Omega and Chris Jericho and Jon Moxley. And so many other people in AEW have come to me with names and suggestions of people that would be great for Dark. And a lot of those people have been great and also for Elevation. And working with different companies, working with New Japan. I’ve put together deals. Booked Ren Narita, For example, through Kenny. We booked Takeshita through DDT, which was great. And to get Takeshita in, he was tremendous. And then also with women’s wrestling, I’ve made different agreements and we’ve been able to do different things there.

Thunder Rosa has been great on Dynamite and had one of the best matches we’ve ever had on Dynamite. She’s a huge part of the AEW family. Thunder Rosa of course came through when I opened the forbidden door, so to speak, through my friendship with Billy and that’s how she started working with us and it turned into something really special. I saw magic with her and I saw that we could do something really special and I wanted to make her and Britt a really iconic rivalry and if you look really far back, it was a long time coming when they had their Lights Out Match. It was a long told story and it’s one of my favorite stories we’ve ever done. And Thunder Rosa, in addition to being a great wrestler, has brought some great talent in. So Thunder Rosa’s scouted, some wrestlers we brought in for Dark.

There’s also a lot of big success stories in AEW. Red Velvet and Will Hobbs and a number of other wrestlers, including a team that I put together, the Acclaimed.”