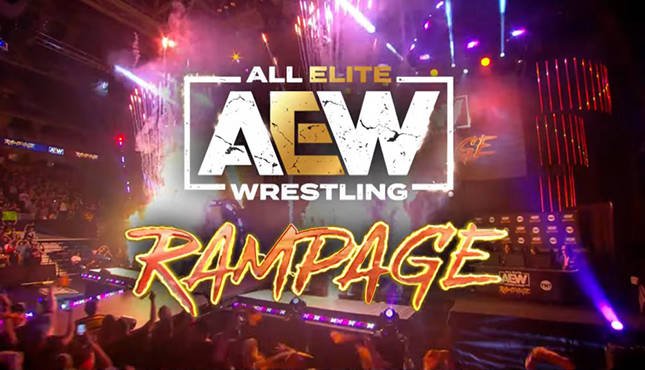 Tonight's episode of Rampage was decent to watch not much entertaining, but it has some good matches for the audience. One thing I believe they should have done was start the tournament a little early so we can at least give the competitors time to showcase. The Brian Cage vs Dante Martin could have been something to keep your eye on if it was at Dynamite just to grab the audience when the tournament continues. Rush and Bandido put on a good showing in the ring, especially with their history in ROH. Didn't understand the point of having Nyla fighting local competitors leading to Full Gear.

The World Tournament continues on tonight’s episode of Rampage as we see Brian Cage taking on Dante Martin and Rush going one on one with newly sign Bandido. Plus, the so call “TBS Champion” Nyla Rose throws a open challenge for the championship. We will also hear from Jungle Boy and hear what he has to say on Christian Cage/Luchasaurus and the All-Atlantic title is on the line as Orange Cassidy takes on Lee Johnson.

Christian Cage/Luchasaurus come to the ring waiting to hear what Jungle Boy has to say. As Jungle Boy walks into the ring, face to face, Christian starts talking about how he and Luchasaurus have beat him in the middle of the ring, how they are finished with him and are focused on winning gold in AEW. Christian mentions how last week, Luchasaurus was dominating the three-way match for the All-Atlantic Championship until Jungle Boy interfered and cost him the match. Jungle Boy talks about how the duo ruined everything for Jungle Boy and challenged Luchasaurus for one more match at Full Gear inside a steel cage. Christian accepts the challenge, starts talking about that he should bring his mother in the front row, and he also talks about his father. Jungle Boy chokes Christian but Luchasaurus attacks Jungle and targets the back of Jungle Boy.

Match started with Dante’s speed over muscle strategy which got him the momentum on his side. Dante used his quickness to avoid Brian’s clotheslines, but Cage pushed him to the corner where he ran toward Dante for an offensive move. Dante’s jumps over the ropes and uses the ropes for a kick to the head. Which got Cage dizzy, Dante tries for a top rope dive but Cage catches Dante and tries to go for a body slam. Dante avoids and gets a dropkick on Cage which pushed him outside the ring. Dante attempts for a suicide dive but Cage’s strength catches Dante for suplex outside the ring floor. The match was back and forth between both competitors, Dante uses his quickness to avoid Brian’s power, but power overcomes speed when Cage hits the weapon X on Dante and advances in the World Tournament.

Backstage Interview: Lee Moriarty talks about how even though didn’t win the World title proved to the world that he can step toe to toe with the best wrestlers in AEW. But now he’s focus on winning some gold, any gold that wants to challenge Lee Moriarty. As Stockley was about to make it clear for all the title holders out there, he was interrupted by the FTW champion Hook, who might seek his new challenger in the future.

As Bandido walks down the ramp to the ring, Rush blindsides Bandido when he jumps over the ropes and brutally man handles Bandido. Rush Irish Whips Bandido to the corner and connects with a running clothesline from one corner to another. Bandido gets the momentum over Rush when he attempts and top rope corkscrew, then goes for a hurricanrana which pushed Rush outside the ring and Bandido connects with a suicide dive and tailspin high dive. Bandido tries to go for the Three Amigos but Rush knee’s Bandido to the head where Rush regains the momentum with some elbow to the head. Both competitors are not giving up the momentum when Bandido hits a power press slam, a German suplex, then Rush hits a German suplex, Bandido connects the crucifix, but Rush connect with a spinning kick where both competitors were down, Jose passes a chair to Rush. As the referee was distracted with Rush, Jose tries to remove the mask of Bandido, but John Silver comes to help as he punches Jose and Rush was distracted with Silver where Bandido rolls up Rush for the pin and advances in the tournament.

Local competitor tries to get the momentum but with Nyla’s power and strength was focus on mocking Jade with some of her move set. Nyla attempts for beast bomb but switches to Jade’s finisher to get the victory. Jade and the baddies come out and attack Nyla, but the baddies were taken out and Jade was able to connect with a big boot on Nyla.

Cassidy goes for the hands in the pocket but Lee charges to Cassidy and lock up, but Cassidy uses his techniques and quickness to get the momentum with a body toss. Cassidy uses his quickness and connects with an arm drag and as Lee tries for an arm drag of his own, Cassidy avoids it and Lee falls to the ground. QT distracts the referee and Best Friends which led Nick to blindside Cassidy as he tosses Cassidy over the guard rail. With the help from The Factory, Lee gets the momentum over Cassidy as he continues to beat the champ down with some Supplex’s, then hits a couple of elbow shots and kicks to the body. Lee attempts for a suplex but Cassidy reverses where he then runs to the ropes, ducks Lee’s
clotheslines and they both collide with a body slam. Lee uses his speed to connect with a couple of superkicks, then connects an elbow to the head but Cassidy connects with beach break and retains his championship.

Tonight’s episode of Rampage was decent to watch not much entertaining, but it has some good matches for the audience. One thing I believe they should have done was start the tournament a little early so we can at least give the competitors time to showcase. The Brian Cage vs Dante Martin could have been something to keep your eye on if it was at Dynamite just to grab the audience when the tournament continues. Rush and Bandido put on a good showing in the ring, especially with their history in ROH. Didn’t understand the point of having Nyla fighting local competitors leading to Full Gear.