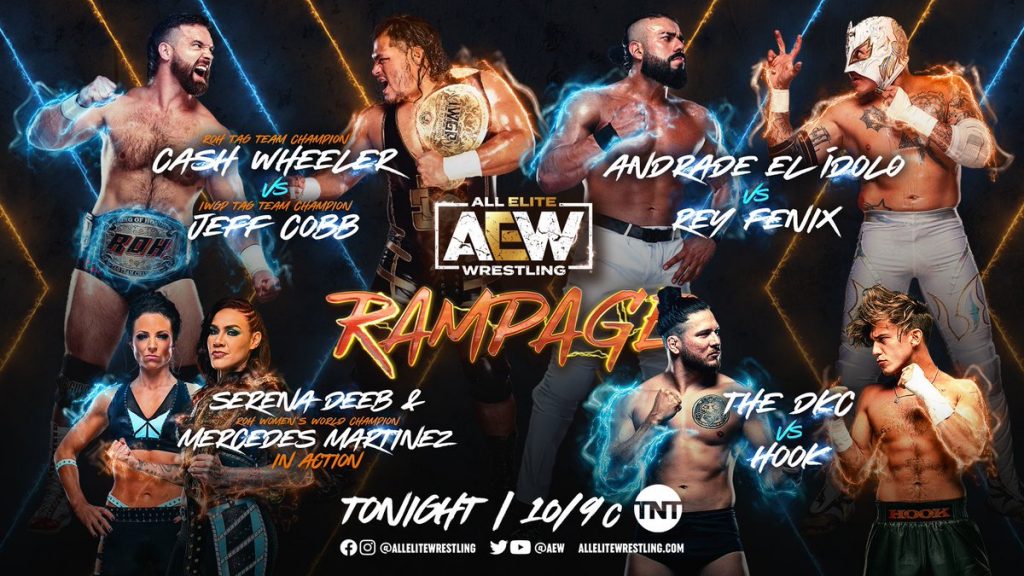 It’s the final Rampage before the Forbidden Door pay per view and we have a nice hour of professional wrestling ahead of us. Andrade El Idolo will go head to head with Rey Fenix in the opening match. Serena Deeb will tag with Mercedes Martinez against Laynie Luck and Sierra, Hook is in action as well tonight. In the main event Jeff Cobb takes on Cash Wheeler of FTR.

GREAT Andrade El Idolo vs. Rey Fenix: Both men are in the ring already and the match starts with a traditional lock up. The crowd claps for Fenix early in the match but Andrade sends him into the ropes and catches him with a shoulder block. Fenix hits a springboard hurricanrana but Andrade comes right back at him with a standing hurricanrana. El Idolo is caught with a back heel kick but he recovers quickly and hits consecutive suplexes. He goes for a third but is blocked by Fenix who hits three suplexes of his own. Rey climbs to the top rope but Andrade rolls out of the ring. Fenix is unbothered and hits a flipping senton off the top rope to the outside. Back in the ring the pace quickens and they go back and forth multiple times. Fenix stalls on the top rope before landing a springboard dropkick. He follows with an absurdly incredible rolling cutter and a near fall. A frog splash attempt misses and Andrade rolls Fenix up for a near fall. Fenix tries to run across the top rope but El Idolo is ready and he knocks Rey on to the apron. Andrade attempts his running meteora into the ringpost but Fenix rolls out of the way. Rey then hits a double stomp off the top rope as we head to commercial break. Out of the break both men are exhausted, Jose passes the tablet to Andrade as Aubrey Edwards checks on Fenix. Before he can hit Rey with it Aubrey catches him and takes the tablet away. Rey Fenix is able to capitalize briefly and hits a sole kick followed by a tope con hiro. Alex Abrehantes attacks Jose which distracts Edwards again, Rush appears on the ramp and he hits Fenix with a low blow. Andrade uses his El Idolo DDT to finish the job. Rush, Jose and El Idolo celebrate after the match by putting on “La Faccion Ingobernable” t-shirts in the ring. Rush takes Fenix’s mast off but Penta Oscuro runs down to make the save before things can get worse.

Eddie Kingston Promo: Eddie is excited about Forbidden Door, not just that, he’s even more excited for Blood and Guts. He wants to taste Chris Jericho’s blood. Too short to rate.

Jonathan Gresham and Lee Moriarty interview: Moriarty challenges Gresham for a title match but is interrupted by Tully Blanchard who suggests his clients deserve a shot at Gresham before Moriarty. Gresham challenges Tully back to a tag match between two of his guys and Gresham and Moriarty. Too short to rate.

SQUASH Hook vs. The DKC: Hook gets a huge pop and the match starts with a kneebar on the DKC. A huge uchi mata throw by Hook follows, and then a high crotch overhead suplex after that. He locks in Redrum and we have our second consecutive squash match.

Result: Hook by Submission via Redrum

GOOD Cash Wheeler vs. Jeff Cobb: Jeff Cobb is not accompanied by Great O’Khan but Cash is by himself as well for this singles match. Cobb wins the prestigious “Sports Entertainer of the Week,” award presented by Chris Jericho. Cobb has a clear strength advantage on Cash which isn’t something you see very often. Cash tries to use his agility to slow the larger man down but is slammed hard for his troubles. After a commercial break, Cash Wheeler has a sleeper hold applied on the large neck of Jeff Cobb. He’s slammed into the corner but Cobb looks vulnerable for the first time in the match. They trade hard right hands in the center of the ring, with Wheeler shockingly getting the better of the exchange. Cobb has a taped left knee and Wheeler targets that knee. Cash hits a powerbomb somehow on the big man and the crowd is firmly behind Wheeler. Cobb misses a standing moonsault but he reverses Cash’s tornado DDT attempt. He tries for the Tour of The Islands but Wheeler has it scouted and rolls him up. Wheeler tries a spike piledriver but is hit with a huge backdrop, and on the second try the Tour of The Islands finishes Wheeler. Great O’Khan makes his way down to the ring but he is run down by Dax Harwood. The other members of the United Empire run down to ambush Dax but then Orange Cassidy and Roppongi Vice join the fray to even the odds. Eddie Kingston then runs in to fight Jericho and they go back and forth at the top of the ramp. The show ends with complete pandemonium, there are fights everywhere around the ring and the arena.

Result: Jeff Cobb by Pinfall via Tour of The Islands

Overall: This was a fun way to head into Forbidden Door. The ending was a definite highlight as United Empire, FTR, Roppongi Vice and Orange Cassidy slugged it out all around the ring, all while Eddie Kingston traded blows with Chris Jericho all over the arena. Jeff Cobb picked up the victory over Cash Wheeler. Serena Deeb and Mercedes Martinez won a squash match but showed there might be some issues between them. Hook continued his winning streak and Andrade El Idolo was able to defeat Rey Fenix with help from his tag team partner Rush. Oh yeah, not only do we have Forbidden Door this Sunday, on Wednesday Eddie Kingston will get his hands on Chris Jericho at Blood and Guts!