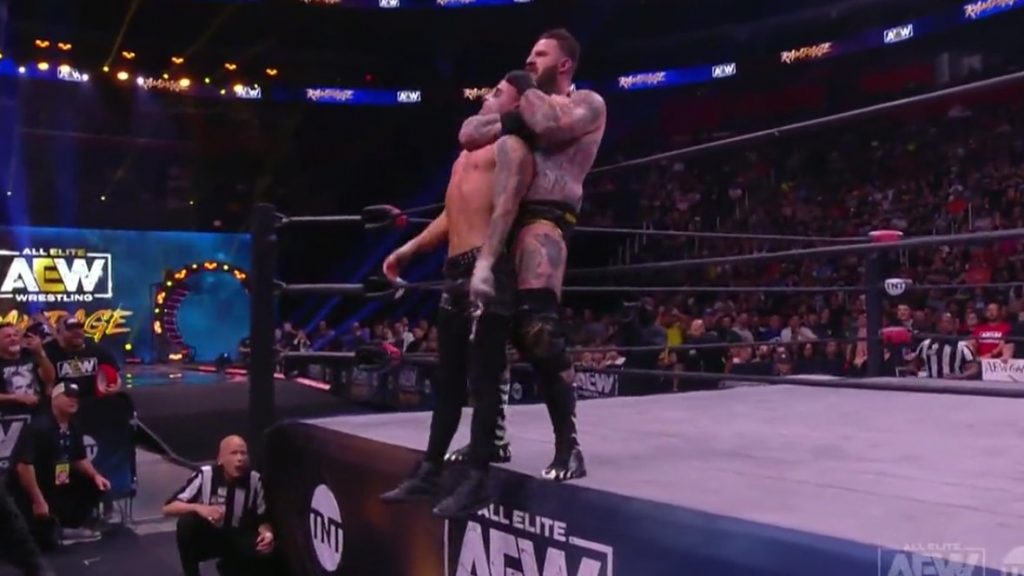 Overall tonight’s show was an entertaining hour of pro wrestling. The battle royal was exciting and it was cool to see the way they did it with two rings. Brody King as the winner was a nice surprise and given his size and skill set, he is a fun change of pace as a challenger to Jon Moxley. The Young Bucks looked excellent in their match against Hiroki Goto and Yoshi-Hashi. In the main event Toni Storm picked up the win against Nyla Rose and she may have formed a new alliance with Thunder Rosa. Oh yeah, Hook spoke, and it was really serious.

Tonight’s Rampage features 3 matches, all from Detroit, Michigan. First we have a Battle Royal to determine the number 1 contender for Jon Moxley’s Interim AEW World Championship. Next, The Young Bucks will be in action against Hiroki Goto and Yoshi-Hashi from NJPW. Finally in the main event Toni Storm battles Nyla Rose.

GOOD Royal Rampage #1 Contender Battle Royal: Hangman Page and Darby Allin make their entrances. Tony Nese and Will Hobbs are already in the rings, and yes you did read that right, just like on Dynamite, there are two rings. Ricky Starks enters and he is assigned the red ring. Each competitor is assigned either the blue ring on the right or the red ring on the left. The Butcher is next for the blue ring where only Darby Allin remains. John Silver runs down to the red ring and evens the odds for Hangman Page against team Taz. Max Caster enters the blue ring accompanied by Anthony Bowens and Billy Gunn. Rush is up next for the red ring. I’m not sure what the intervals are, but people are definitely entering faster than they are being eliminated. Blade joins Butcher in the blue ring. The red ring is definitely the fuller of the two and Penta joins that one. Rush meets Penta on the apron but is caught with a slingblade. John Silver is eliminated by Ricky Starks right before Swerve enters the blue ring and immediately eliminates Max Caster. Keith Lee joins the red ring, which is interesting because most of the other teams have entered the same ring to this point. Dustin Rhodes enters the red ring, after Matt Hardy enters the blue ring. Penta and Rush trade shots on the apron where they eliminate each other. Frankie Kazarian joins the blue ring which is now the fuller of the two rings. Konosuke Takeshita enters the blue ring as well after Dante Martin enters the red one. Takeshita and Swerve hit a double german suplex on Darby Allin. Brody King enters as the last competitor in the red ring. Orange Cassidy will be the final entrant in the blue ring, and as expected he takes his time getting there. Once in the ring he is immediately met by Takeshita and a brainbuster. Dustin Rhodes is eliminated in the red ring right before Takeshita is eliminated by Butcher and Blade. Orange Cassidy is suddenly eliminated by Swerve at nearly the same time as both Hobbs and Keith Lee are knocked out of the other ring. Swerve is then eliminated as well as Ricky Starks and Hangman Page. Brody King is the final competitor in the red ring. Darby Allin eliminates both Butcher and Blade and it is down to him and Brody King. Brody lands a gigantic cannonball senton in the corner and then hoists Darby up on the top rope. Allin briefly counters but is caught in a sleeper hold and essentially he’s choked off of the apron. Brody King will face Jon Moxley for the interim AEW World Championship.

Hook Interview: As usual Hook does not speak, and he grabs Alex Marves by the tie and says, “that’s the problem Alex, most people don’t think.” Too short to rate.

GOOD Hiroki Goto and Yoshi-Hashi vs. The Young Bucks: Nick Jackson starts the match with Goto and Hiroki lands a huge shoulder tackle. Yoshi-Hashi comes in and they double team Nick with repeated forearms to the back. Matt is tagged in and he hits his signature locomotion Northern Lights suplexes. Nick hits an escalera to lay out both Yoshi-Hashi and Goto as we head to commercial. In picture in picture the Bucks continue to dominate the action. Goto is knocked off the apron leaving Yoshi-Hashi stuck in the ring with no one to tag in. When we return from the break Goto makes it back to the apron and he is finally tagged back in. Yoshi-Hashi jumps in and they hit a headhunter for a near fall. Both teams go back and forth with superkicks and clotheslines. Goto hits an ushigoroshi on Nick Jackson and then tags in Yoshi-Hashi who drills Nick Jackson with a superkick. They try to follow but the bucks send Hiroki Goto into the other ring. The Bucks hit a BTE Trigger on Yoshi-Hashi, and then Nick Jackson leaps into the other ring to lay out Goto. Nick leaps back into the other ring to hit the Meltzer Driver for the 1, 2, 3.

ABOVE AVERAGE Toni Storm vs. Nyla Rose: Nyla Rose is accompanied to the ring by Marina Shafir and Toni Storm enters alone. Storm is immediately met with a huge elbow from Rose but she uses her agility to evade more damage. She uses a drop toe hold to ground Rose and then works her over to the corner. Rose fights out of the corner and suplexes Toni but Storm is totally game and she immediately responds with right hands. Storm hits the ropes and while Nyla distracts the referee she is hit with a kick by Marina Shafir. During the commercial break Rose dominates Toni Storm while intermittently distracting the referee so that Shafir can get in more shots of her own. Toni is set up against the ringpost but she moves out of the way and Nyla hits it shoulder first. The opening allows Storm to return to the ring where unfortunately Rose continues to pour on the offense, hitting a spinebuster and then locking in a camel clutch. The majority of this match unfortunately took place during picture in picture. Out of the break Rose misses on a cannonball senton, and it allows Toni Storm to hit her signature hip attack. Shafir gets involved and it halts Storm’s momentum but she hits a double DDT on both Rose and Shafir outside the ring. Back in the ring Rose tries a Beast Bomb but it’s reversed by Storm briefly until Nyla Rose sits down right on top of her. They trade punches and in the corner Nyla Rose rips off the top turnbuckle pad. She sets Toni Storm up on the other side for a guillotine leg drop but misses. Storm responds with a German suplex and they’re both down. Marina Shafir climbs on the top rope for a distraction but nothing comes of it. Toni Storm hits a pendulum DDT and that is the win. Immediately following the match Shafir attacks Storm from behind, Thunder Rosa runs in for the save and once Storm recovers they clear the ring of Rose and Shafir. The show ends with Thunder Rosa and Toni Storm standing tall.

Overall tonight’s show was an entertaining hour of pro wrestling. The battle royal was exciting and it was cool to see the way they did it with two rings. Brody King as the winner was a nice surprise and given his size and skill set, he is a fun change of pace as a challenger to Jon Moxley. The Young Bucks looked excellent in their match against Hiroki Goto and Yoshi-Hashi. In the main event Toni Storm picked up the win against Nyla Rose and she may have formed a new alliance with Thunder Rosa. Oh yeah, Hook spoke, and it was really serious.