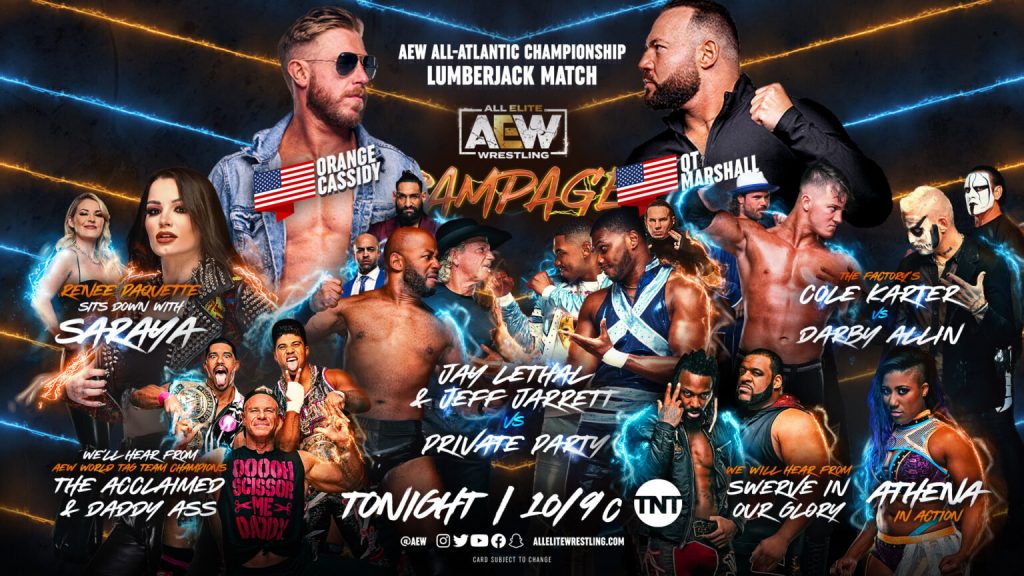 Rampage was decent to watch with lots of video promos but had some good matches. Some of the matches are okay to see but not much of an impact on the audience. The tag match with Private Party could have gone longer so we can see more of Private Parties improvement as a tag team. Athena needs to stop with Squash matches, especially leading to her title match against Mercedes in the ROH PPV. The main event for the All-Atlantic Championship was a good way to end the night and with a brawl in the end with the House of Black.

Tonight, on Rampage, Darby Allin will take on Cole Karter of The Factory and Athena will be in action tonight. Plus, Private Party will go head-to-head against the team of Jay Lethal/Jeff Jarrett and we will see Orange Cassidy taking on QT Marshall for the All-Atlantic Championship in a Lumberjack Match. We will hear from Swerve in our Glory and the AEW Tag Team Champions the Acclaimed.

Before the bell rung, Nick Comoroto gets in the ring to blindside Darby, but Darby was ready with the black bat and attacked Nick to take him out. Darby then throws the bat outside the ring, where Cole goes for the bat and Darby suicide dives onto Karter. As soon as the bell rung, Darby continues the attack with a dropkick, elbow shots to the head and a running corner dropkick. Darby attempts for a coffin drop but Karter pushes Darby off the top rope. Karter still keeps the momentum as he connects with a turnbuckle powerbomb, then some chops to the chest and he attempts a stinger splash, but Darby moves out of the way. Darby gains the momentum as Karter goes for a suplex but Darby reverses it, connects with a chop block, hits some hard palm shots and hits Code Red for a 2-count pin. Darby goes for a top rope dive, but Karter stops him, Karter goes for a 450 splash which fails, and Darby hits a scorpion death drop with a coffin drop for the win.

The Acclaimed with Billy Gunn come out heading to ring to talk with Renee. Renee asks The Acclaimed what is next for them? Bowen answers with how rude it was for Jarrett and Jay Lethal interrupted there scissoring. Bowens continues saying that maybe Jay and Jarrett want a title shot but they can’t cut the line because there has been a team waiting for their chance against the champions. As the fans are chatting “FTR”, Austin and Colt Gunn come out and says that they are the best tag team, but Jay and Jarrett come out where Sanjay talks about how they are going to show everyone why they are the greatest tag team. Billy Gunn then talks about how they misunderstood when they said, “The Best” and FTR music hits, head to ring and shake hands to confirm a match for the AEW Tag Team Championship.

Lethal and Kassidy start the match, Lethal tries to grapple lock but Kassidy ducks, head locks Lethal, Lethal goes for a suplex, Kassidy reverses and attempts an arm drag. Lethal stops the momentum with an elbow shot to head and tags in Jarrett who connects with a couple of stomps, Irish whips but reverses by Kassidy with an arm drag. Kassidy then tags in Quen, who attacks Lethal and then double teams Jarrett, but Jarret connects a fist head shot. Lethal and Jarrett keep the momentum as they attack the head of Kassidy and making sure he doesn’t tag in Quen. Kassidy somehow managed to tag in Quen, who comes in blazing hot, with a big top rope crossbody, then a dropkick on Lethal and suicide dives to Jarrett outside the ring. Then Private Party connects with silly string on Lethal but instead of a cover, Quen goes for a 450 splash, after failing then Quen goes for roll up pin but Lethal and Jarrett double team Quen for the win.

Athena connects with a strong elbow shot to the head and connects with a 3 amigos suplex. Goes for the pin but as the ref was about to count three, Athena pulls the head up and then argues with the ref. Dani then goes for a roll up, gets a one count and connects with roundhouse kick but no affect. Athena then hits her new finisher and gets the pin for the win. Athena then throws Dani over the ropes and brutally attacks her and throws her into the steel steps.

QT tries to grapple lock Orange but orange ducks under, rebounds with the ropes, goes over QT and connects with a dropkick. Marshall rolls out of the ring, where Best Friends rolls back QT and QT connects with knee to the stomach. QT throws Cassidy outside the ring where he does his signature kicks on the lumberjacks and QT tries to throw Cassidy to the barricades but Cassidy reverses on him. Cassidy goes for a top rope dive but Marshall catches Cassidy and connects with a backbreaker. Marshall continues attacking Cassidy and using the lumberjacks as leverage to keep the momentum. Cassidy connects a jaw breaker on Marshall, connects with some shots in the stomach but QT still overpowers him. Marshall tries to end Cassidy by attempting a piledriver on the edge of the ring but is stopped by Dan Hausen, Orange then connects with beach breaker on the edge of the ring and high dives on the lumberjacks. As Orange was going for a top rope move, Penelope comes out, distracts the ref where Sabian then throws Cassidy to QT who hits a diamond cutter. With all the interference, somehow Orange Cassidy hits the superman punch and beach break to retain his title.

Rampage was decent to watch with lots of video promos but had some good matches. Some of the matches are okay to see but not much of an impact on the audience. The tag match with Private Party could have gone longer so we can see more of Private Parties improvement as a tag team. Athena needs to stop with Squash matches, especially leading to her title match against Mercedes in the ROH PPV. The main event for the All-Atlantic Championship was a good way to end the night and with a brawl in the end with the House of Black.