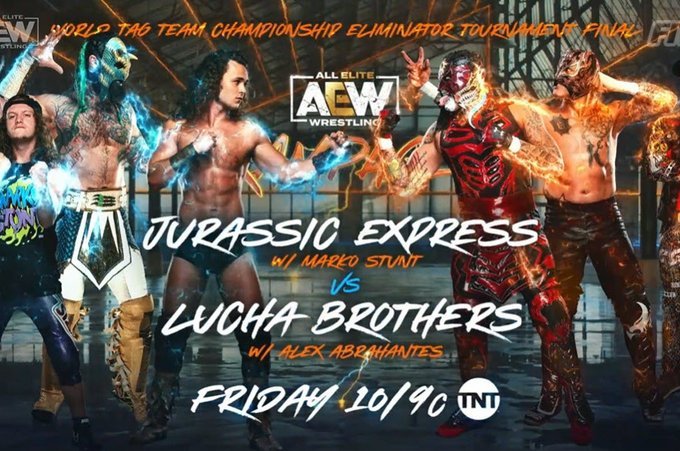 Last week saw one of the most pivotal moments in recent wrestling history. CM Punk made his triumphant return to wrestling and announced that he is in fact All Elite and will face Darby Allin at All Out. Tonight, with Punk and Darby set to meet once again, along with the finals of the tag team eliminator, can Rampage keep their momentum for their first taped show? Let’s find out!

MUST WATCH: The show kicks off with the finals of the tag team eliminator tournament with Jurassic Express taking on the Lucha Bros. Prior to the match, the tag team champions the Young Bucks come out to observe the action. The match starts off with a great sequence between Fenix and Jungle Boy. These two are always a delight to see in the ring. Luchasaurus is also very underrated in-ring and he had a fun sequence with Penta. This match was absolutely electric. Penta hit Jungle Boy with a destroyer ON the apron. Fenix hit a destroyer on Luchasaurus who kicked out at one. Luchasaurus eats multiple superkicks from the Lucha Bros and the fear factor to secure the Lucha Bros a trip to All Out and a tag team title shot inside a steel cage. A fantastic match.

AVERAGE: Post match, the Young Bucks attack the Lucha Bros, but Jurassic Express makes the save. A decent post match angle. Really looking forward to the Bucks vs the Lucha Bros.

GOOD: AEW played a recap of the feud between CM Punk and Darby Allin up to this point. They show footage from Punk’s big return last week and they discuss how Punk is doing this to prove that he’s still the best in the world after being away for so long. The package ends hyping up a countdown to All Out special airing next week. Overall this was a good video package, but I’m afraid this was what they meant by “hearing” from Punk and Darby. If so, that’s a bit of a let down.

GREAT: Miro comes out to the ring and beats up Fuego Del Sol during his entrance. Absolutely tremendous. Miro says that he will forgive Fuego, but only if he shows his face. He then proceeds to rip his mask off and hit him with the sidekick. Eddie Kingston comes out and makes a beeline for Miro. The two fight until referees come out to break them up. A really fun segment. Miro continues to be phenomenal and I’m really hyped for him vs Kingston, whenever that may take place.

AVERAGE: Up next is Tay Conti vs The Bunny. Bunny attacks Conti before the bell and gets the early advantage. This overall was an ok match. The finish sees Penelope Ford come out and distract Aubrey. This allows the Blade to throw Bunny a pair of brass knuckles. She hits Tay with the knuckles and picks up the win. The Bunny seems to have formed an alliance with Ford going into the casino battle royale so that’s interesting to see as well.

Result: The Bunny won via pinfall

AVERAGE: Mark Henry does a split screen interview with the combatants for the main event. Omega talks about how Christian got lucky on Rampage a few weeks ago and that at All Out Christian won’t be so lucky. Christian talks about how it doesn’t matter how Kenny lost as Christian was the first man to pin Omega in two years. Kazarian finishes by calling Cutler a stooge. This was a decent little segment but everyone was clearly rushing through the promo due to the time constraints which hurt it a bit.

AVERAGE: We have our main event of the evening as Kenny Omega and Brandon Cutler take on Christian Cage and Frankie Kazarian. The match starts off with Cutler taking a lot of abuse. Eventually Omega gains the advantage on Kaz after Michael Nakazawa hits him with the laptop. Omega gains control until Christian makes the hot tag. Cage goes to hit the spear on Cutler but is tripped up by Omega who crotches him into the turnbuckle. All hell breaks loose as Omega hits Cutler with a V-trigger accidentally. Christian goes for the Killswitch on Omega, who escapes and runs to the outside. Christian hits the killswitch on Cutler for the win as Kaz holds off Omega. Overall this was a good enough main event. Not as solid as the opening match but still enjoyable.

Overall, Rampage was a fun enough show this week. The opening tag match and the Miro segment were fantastic. However, everything after that didn’t match the same quality as the first half of the show. The women’s match was decent and the elite tag was good but nothing special. The fact that this was the first Rampage to be taped did also hurt it a bit, as the crowd wasn’t as into the show as previous weeks, most likely burnt out from previous action.