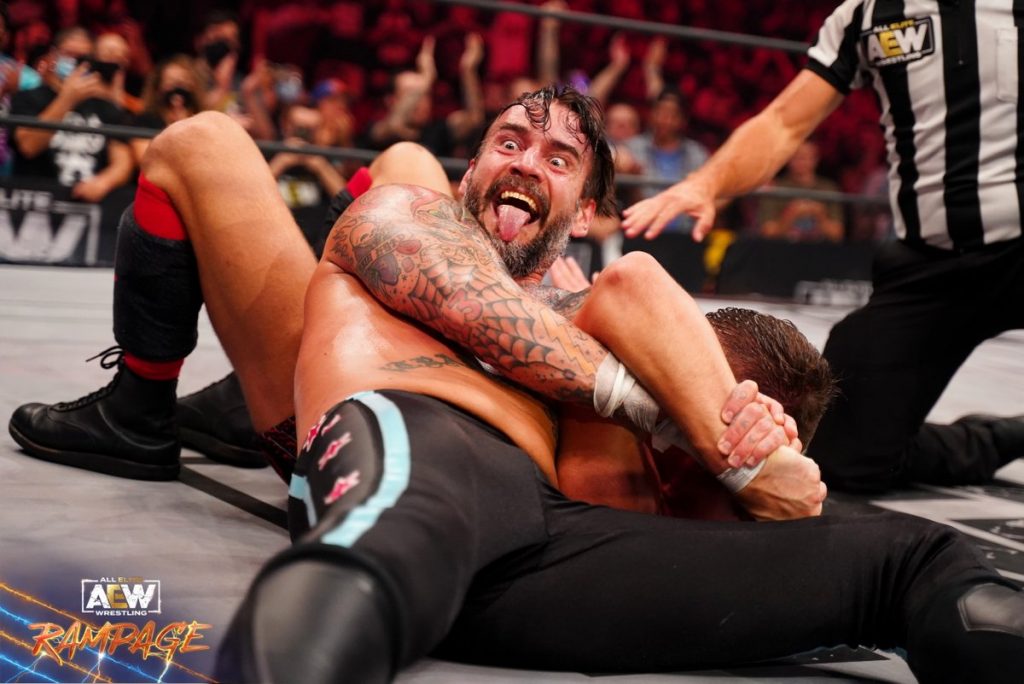 Coming off of one of the biggest and best Dynamites of the year, Rampage is stacked. CM Punk is in action, as he looks to defeat Daniel Garcia, the FTW Championship is on the line as Ricky Starks takes on Brian Cage in a Philly Street Fight, all of this and more is happening tonight! Ladies and gentlemen, this is Rampage.

GREAT: Opening the show, we got a great one on one match from Daniel Garcia ans CM Punk. Punk got control early on, bur Garcia was able to hit an elbow to get the upperhand. At one point, 2point0 attacked Punk behind the ref’s back but Punk was able to escape and hit a huge dive to the outside. Punk rolled Garcia into the ring, hit a piledriver, and locked in the Anaconda Vice for the victory.

GOOD: Backstage we saw Tony Schiavone along side Lio Rush, Dante Martin, and Matt Sydal. Sydal and Lio go back and fourth about whether or not what Lio Rush has is real, before Rush informs Sydal that he yet to prove his worth, and that next week on Rampage, Matt Sydal will be taking on CM Punk.

GOOD: The AEW Tag Team Championships were on the line next, as The Lucha Bros defended their titles against The Acclaimed. Before the match could get officially underway, the Acclaimed attacked The Lucha Bros. The match went back and fourth for a little bit, with both teams showing off both strength and agility. The bout ended shortly though, as the Lucha Bros were able to retain their titles.

SATISFACTORY: Jade Cargill made her way to the ring as she was facing Skye Blue, who didn’t even get an entrance. There’s not much to say about this match, as it ended very quickly, with Jade Cargill picking up the win against Skye Blue.

AVERAGE: After the match, Cargill continued her assault on Skye Blue. Then Thunder Rosa ran out to the ring with a chair to help even the odds. She ran Cargill and Smart Mark Sterling up the rank, ending the segment.

GOOD: Main event time, as Ricky Starks looks to defend his FTW Championship against Brian Cage in a Philly Street Fight. This match had it all. Tables, chairs, trash cans, steel pipes, oh my! When it seemed like Cage had it won, Powerhouse Will Hobbs and Hook came out to help Starks. Cage drove them off, as Starks hit Cage with the FTW Championship to take advantage of the distraction. Ricky Starks then hit Brian Cage with a spear, and then his finisher to win the match.

Rampage wasn’t at all what I expected this week. I expected every match to at least be great. But alas, I got my hopes up for an overall average show. While nothing terrible happened, I just expected much more from the tag match and the women’s match. It’ll be interesting to see what happens next week though, as Rampage happens before Dynamite. Hopefully next week will be 10x better than what we got tonight.