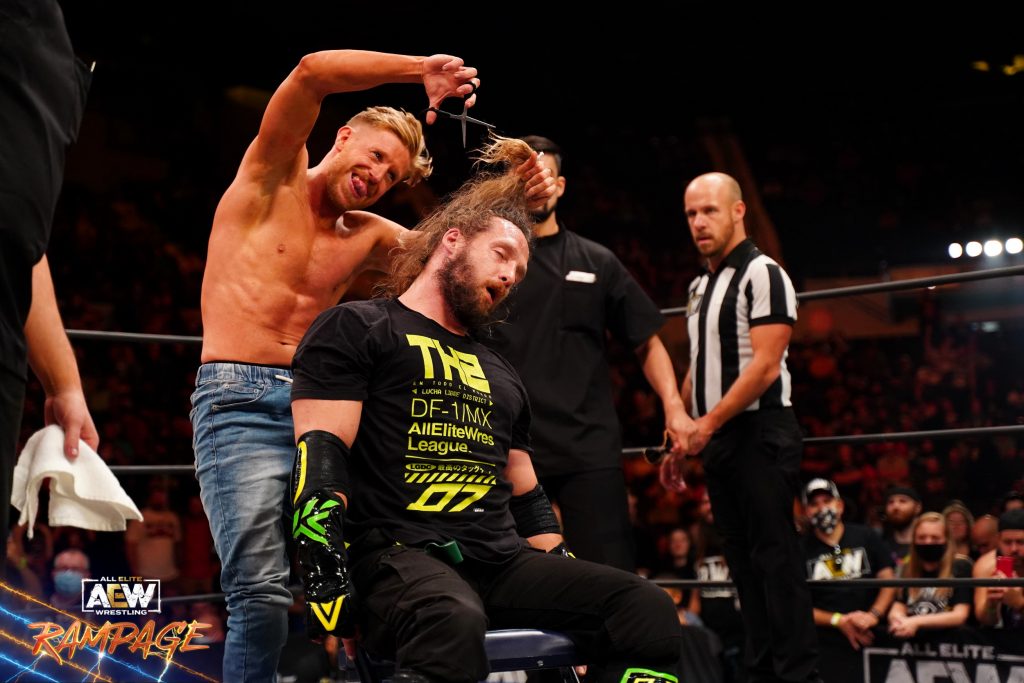 Another Friday, another Rampage. Coming off the heels of AEW’s Grand Slam shows last week, this week, in my opinion, looks better. Lined up we have triple threat action, we have hair on the line, and of course the Rampage debut, of Bryan Danielson. So without further delay, let’s get right into it.

GREAT: Opening up the show this week was Bryan Danielson vs Nick Jackson of The Elite. This match was awesome. Danielson took control early on and it was all back and forth from there. Nick Jackson looked great as always, especially since its very rare for him to have a singles match. As for Bryan Danielson, he also looked great, even hitting a Danielson Special at one point. In the end though, Bryan Danielson was able to lock in a very interesting looking submission move, eventually making Nick Jackson tap out.

GOOD: After the match, Kenny Omega, Adam Cole, and Matt Jackson made their way down to the ring, assumingly to attack Bryan Danielson. Before anything could happen though, Christian Cage and Jurassic Express came out to even the odds. The two teams begin to brawl. The brawl ends with both Danielson and Jungle Boy locking their signature submission moves on Kenny Omega and Adam Cole as the Luchasaurus and Christian Cage keep The Young Bucks and Brandon Cutler on the stage.

AVERAGE: Up next we got a pretty basic promo package from Ricky Starks. He basically called out Brian Cage and said he was going to prove Brian Cage wrong and that Cage cannot beat Starks just because Cage is the bigger man.

GOOD: Then we got a promo package for CM Punk. Punk said that his experience in the business is what got him the win over Powerhouse Will Hobbs and that its time to get down to business.

GOOD: It was then time for women’s action we got a triple threat match between Thunder Rosa, Nyla Rose, and Jade Cargill. This was a pretty good match, with a lot of back and forth action and even weapons getting involved. Jade Cargill got the win after Thunder Rosa put Nyla Rose through a table, Jade Cargill beat down Rosa with a chair, and Cargill pinning Rosa down for the three count.

GREAT: In the main event, Orange Cassidy took on Jack Evans in a Hair vs Hair match. This match was full of what you expect. Comedic, yet good in ring work from Orange Cassidy, and awesome high flying moves from Jack Evans. Towards the end of the match, Matt Hardy had the rest of the Hardy Family Office come out and interfer in the match to help Jack Evans. The Best Friends and The Dark Order came out, outnumbered and blocked HFO from getting to the ring. Orange Cassidy then hit the Orange Punch to Jack Evans, pinned him, and won the match. The show then ended, with Jack Evans getting his head shaved by Orange Cassidy.

Rampage this week was really good. I enjoyed pretty much everything top to bottom and I am definitely interested to see what happens on Dynamite and Rampage next week. My only complaint is that, the Team Taz/Brian Cage feud is beginning to lose steam. Other than that, the show was on point, and definitely one of the best shows of the week.