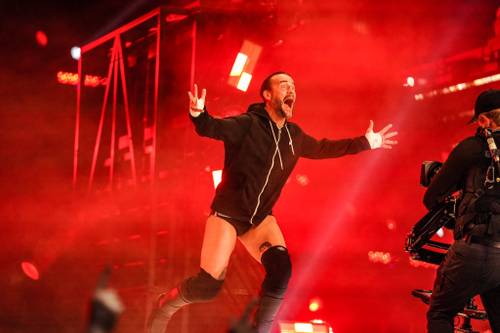 It’s Friday and you know what that means, Rampage. This week is AEW’s 2 hour Grand Slam special. Lined up we have CM Punk’s first AEW Television match, six man tag action with The Elite, Christian Cage, and Jurassic Express, a Lights Out match and more. Let’s get right into the review.

GOOD: Opening up the show we got CM Punk taking on Powerhouse Will Hobbs in Punk’s first match on AEW Television. Both men looked really good in this match with Hobbs getting in more offense against Punk than I anticipated and some points looked like he could win. In the end though, after causing Hobbs to run into Hook, hitting a GTS, and pinning Hobbs, Punk was able to win the match.

GREAT: Up next is 6-man tag action as The Elite (Adam Cole and The Young Bucks) took on Christian Cage and Jurassic Express. While not as good as the first match, this watch was still fun to watch. Towards the end of the match, it appeared that Luchasaurus had the win in his sights but Adam Cole was (somehow) able to hit a Panama Sunrise. The Young Bucks capitalized by hitting a BTE Trigger leading to Cole hitting the Last Shot to win the match for his team.

RESULT: The Men of the Year defeats The Inner Circle via pinfall

AVERAGE: After the match, American Top Team came out and attacked Jericho and Hager. That’s really all that happened. What confused me the most about this is that, Hager and Jericho had to fend for themselves as the rest of Inner Circle didn’t come out to help.

AVERAGE: It was then time for even more tag team action as The Lucha Brothers teamed up with Santana and Ortiz to take on The Butcher, The Blade, and Private Party of Hardy Family Office. While this was an interesting match on paper, it suffers from being too short. Before typing this review, I looked it up, and the match was 5 minutes and 55 seconds. The ridiculously short bout ended as all the babyfaces beat down Marq Quen to eventually get the win.

SATISFACTORY: Anna Jay took on Penelope Ford in singles action and oh boy was this short too. AEW is really bad about giving their women a lot of TV time and I honestly wish they would do something about it. They have a really talented women’s roster, yet all they give them is 5 minutes or less on TV. Anyways, Anna Jay got control in the beginning, only for the The Bunny to run out to aid Ford, then Tay Conti came out to even in the odds. After a short while, The Bunny slipped Penelope Ford some brass knuckles to hit Anna Jay and win the match.

GREAT: In the main event, we got a Lights Out Tag Team match as Minoru Suzuki and Lance Archer of Suzuki-Gun took on Jon Moxley and Eddie Kingston. The match was heavily in Suzuki-Gun’s favor, as they had Moxley’s hands zip-tied behind his back and was basically double teaming Eddie Kingston. But then, someone’s music hit… As the camera panned to the stage we saw the trons… Homicide made his AEW debut! He came through the crowd, took out Archer, and cutting Moxley’s hands free. Moxley hit both his opponents with a Paradigm Shift before Eddie Kingston put a trash can on Lance Archer and went absolutely ultimate super duper devious mode on Archer with a kendo stick, pinned him, and won the match.

This was a fairly decent show from AEW. While not the worst episode of Rampage, it’s far from the best. It started off and ended really good, but the middle part of the show was really bland. The 8-Mam Tag definitely should have been somewhat longer, as that match was full of talent that can but on a decent match. My thing is, I wish AEW would give their women more time. The highlights of this show is definitely the lights out match and CM Punk vs Will Hobbs. You’re aren’t missing much if you skip everything else.