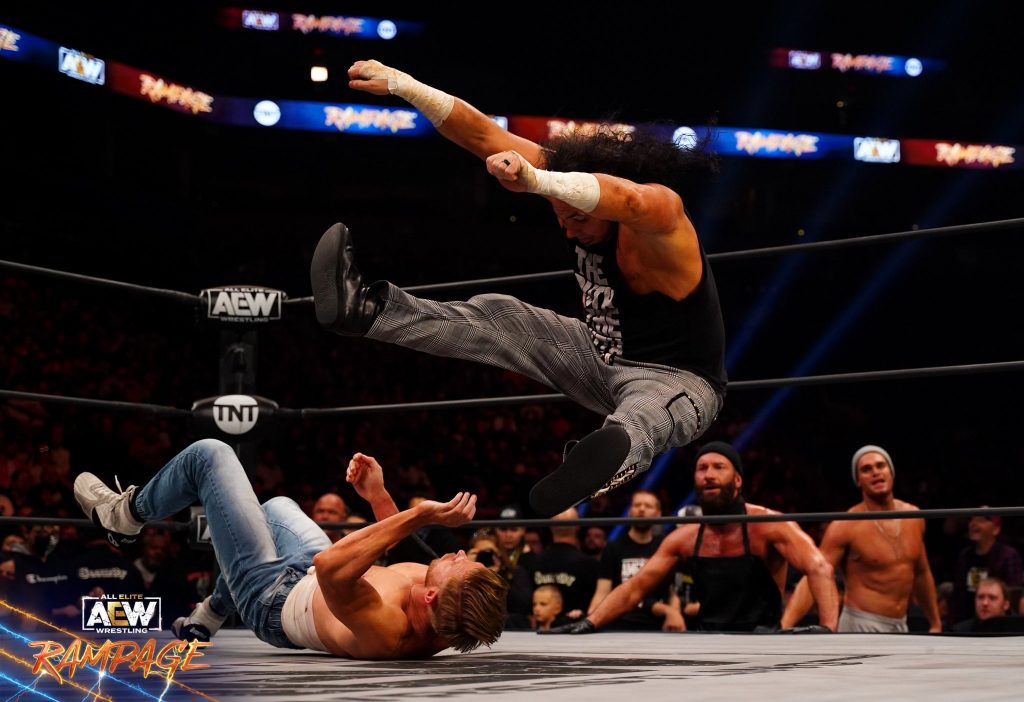 It’s Friday, you know what that means… That’s right its time for another edition of AEW Rampage. This week is stacked! Lined up for this week, we got a lumberjack match, Bobby Fish taking on Jungle Boy, Dante Martin in action, and more!

GOOD: We open up the show with Bobby Fish taking on Jungle Boy. this was a solid opening match up. It started off with Jungle Boy getting the upper hand at first but it was all back and forth from there. The match ended after Jungle Boy was able to lock in the Snare Trap and make Bobby Fish tap out.

GOOD: After the match, Adam Cole ran down to the ring and attacked Jungle Boy. Bobby Fish joined in the attack and the duo prepared to hit a con chairto on Jungle Boy before Luchasaurus and Christian Cage came out and ran them off, saving the day.

SATISFACTORY: Jade Cargill went head to head with Santana Garrett. This was nothing special, as the match revolved around the fact Red Velvet was in the crowd. The short match ended with Jade Cargill hitting Jaded, pinning Garrett for the 3 count.

GOOD: Dante Martin took on a debuting Ariya Daivari. I liked the fact AEW has gotten a couple of the released 205 Live/Cruiserweights from WWE to appear on AEW, first Tony Nese, then Samuray Del Sol (Kalisto), and now Ariya Daivari, and this match? This match, was really really good. There was a lot of back and forth high flying action The match ended after Dante Martin hit a double springboard moonsault to Daivari to win the match.

AVERAGE: In the main event we got a lumberjack match as Matt Hardy took on Orange Cassidy. This was… something. For starters, Matt Hardy basically put a $23k hit on Cassidy, which basically meant almost all the lumberjacks would be heel. So we get into the match and it wasn’t terrible, but it wasn’t great either. Literally as soon as the match ended I forgot almost all of it, except the end, which was The Blade hitting Orange Cassidy with brass knuckles, then Matt Hardy pinning him to win the match.

This week’s Rampage was, in the words of MJF, mid. Outside of Jungle Boy vs Bobby Fish and Dante Martin vs Ariya Daivari, this show is very forgettable for a go home show. Hopefully after Full Gear, AEW will be able to make next week’s Rampage, better than this week’s.