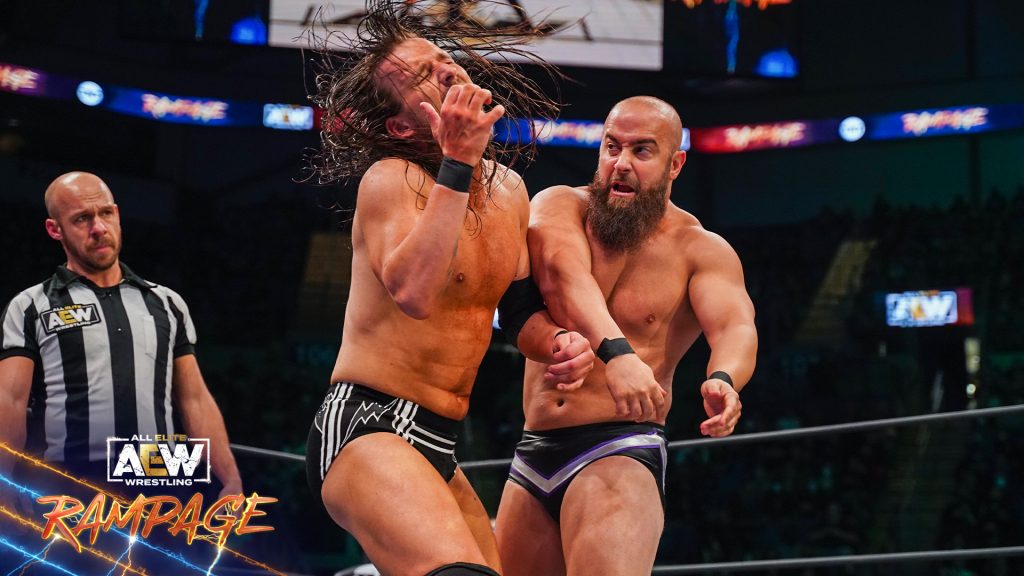 It’s Friday and you know what that means. Welcome to this week’s Rampage review, lined up for tonight, the TBS Championship Tournament continues as Red Velvet takes on The Bunny, Adam Cole takes on John Silver, and much more. We got a stacked one hour ahead of us so without further ado, ladies and gentlemen, this is Rampage.

GOOD – We open up the show with Bryan Danielson vs Anthony Bowens. This match was made official by Tony Kahn after The Acclaimed called out Kahn and said he was a bad boss. Danielson had control for the majority of the match, however there were times Anthony Bowens looked strong. However, Anthony Bowens had no choice but to tap out to the Lebell Lock and give Danielson the win.

MUST WATCH – CM Punk comes out next to go face to face with Eddie Kingston. Punk starts off by inviting Eddie Kingston to the ring, however once his music starts he does not come out. CM Punk began to continue talking to ask for an apology for Eddie interupting Punk last week. Eddie came out to the ring and cuts a phoenomal promo on CM Punk. He says he’s sorry for not showing up to work out of fear of being sick. He then tells Punk off for not believing in him. For making fun of him. He them name drops Ring Of Honor/Indy Legends such as Smamoa Joe and Amazing Red as some of the people he looked up too. Punk tell Eddie it wasn’t just him making fun of Kingston, but everyone. Eddie tells Punk to fight him, and lays down the challenge for Full Gear. Punk insults Kingston by telling him, he was hoping to fight Kingston on something like Dark and Elevation, before calling Eddie Kingston a bum. The two engage in a fight, sending the all the refs and part of the locker room out to break it up. Eddie Kingston vs CM Punk is made officially for Full Gear.

AVERAGE – Up next was the final round one match of The TBS Championship Tournament as Red Velvet took on The Bunny. This watch was short and not very exciting. It ended after about 3 minutes after Red Velvet hit the Final Slice for the three count.

GOOD – In the main event, John Silver took on Bludge- sorry, Adam Cole (BAYBAY). This match was full of nonstop back and forth action. At one point, the Young Bucks stopped a referee count, causing the referee to get distracted by The Bucks and The Dark Order. While all this was happening, Adam Cole attempte to low blow John Silver, but Silver revesrses and hits a liger bomb. Though it was Adam Cole who got his arm raised in victory after hitting John Silver with The Boom.

Rampage was really good this week. Outside of Red Velvet vs The Bunny the show was solid top to bottom. Though this show suffers from what I like to call AEW syndrome, aka not giving the women enough time. While yes, I much rather watch Adam Cole vs John Silver, Red Velvet vs The Bunny was a tournament match. But like I said other than that, this show was really good top to bottom, nothing I can really complain about, and I cannot wait to see what happen next week leading into Full Gear!