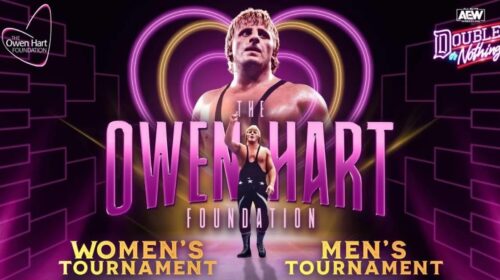 AEW is committed to continuing to honor the life and legacy of Owen Hart in more ways than one.

During this Sunday PPV Double Or Nothing, we witnessed the finals, both women and men, of the Owen Hart Foundation tournament.

Adam Cole and Dr. Britt Baker have been crowned the winners of their respective categories.

The person in charge of presenting the winners and title belts was Dr. Martha Hart.

Both title belts drew attention to the fact of seemingly paying homage to Stampede Wrestling – the defunct Canadian promotion established by Stu Hart, the father of The King of Hearts.

The below picture shows that the belts closely resemble the NWA Stampede North American Heavyweight Championship.

A title that was held on two separate occasions in 1987 by Owen.

The main design change is the silhouette of Owen replacing the signature NWA grappler pose.

During her speech, Dr. Hart mentioned how the wrestling world can “once again” celebrate the career of her late husband.

“It is with great anticipation that we meet this moment in history where the amazing contributions, skilled craftsmanship and talents of my late husband Owen Hart are celebrated,” Dr. Hart said. “He was one of the greatest artisans of his time, one of the greatest professional wrestlers ever. Now, we can once again celebrate him in the squared circle.”

Dr. Hart also thanked Tony Khan, Chris Jericho, The Dark Side of the Ring crew, and the rest of the AEW locker room for making the Owen Hart Foundation tournament a reality.

In addition, the tournament became a reality. AEW and Jazwares released a new Owen Hart action figure over the weekend.