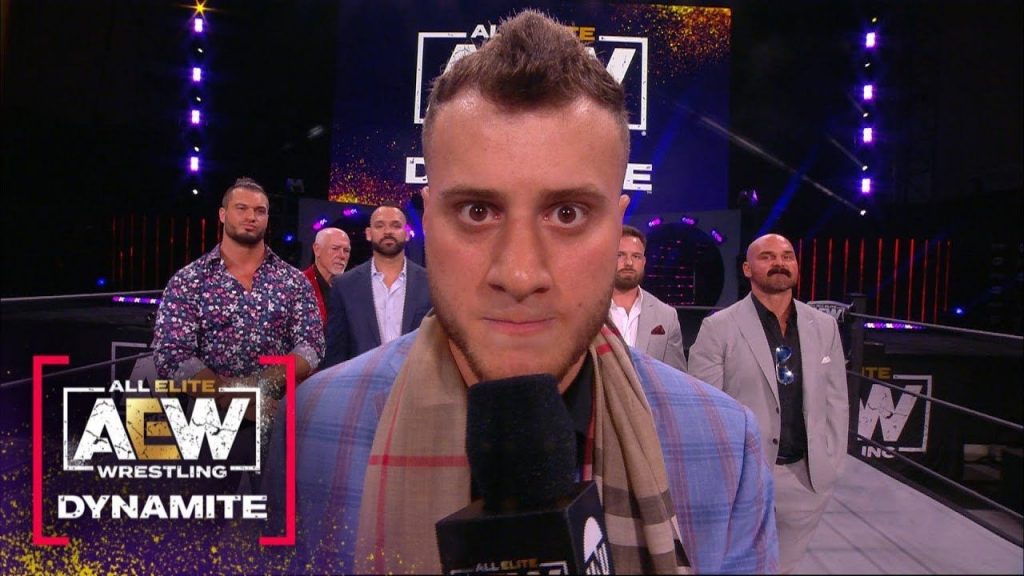 Just two weeks shy of Double Or Nothing, on tonight’s show the fallout from it continued. After the highly disappointing TV rating the company faced last week, AEW had fo be hoping that tonight’s show would bring viewers back. Did it deliver? Let’s find out!

AVERAGE: Matt Hardy opened the show while standing with TH2 in the middle of the ring. Hardy promised to ensure that after tonight’s match, Christin Cage would lose a lot of money. This promo was far too over the top, as you can’t tell me for a minute Hardy actually believed Angelico could beat, never mind end the career, of Christian Cage.

GOOD: Angelico and Christian Cage opened up the in ring action for the night, with both men putting on an entertaining opening bout. This was by far the best Angelico has looked in All Elite Wrestling.

GOOD: After the match Matt Hardy and Jack Evans took out Christian Cage before Jungle Boy made the save

GREAT: Cody Rhodes came out alongside the son of Arn Anderson, Brock Anderson, to announce that Brock would be making his All Elite Wrestling debut next week in a tag team match with Cody. QT Marshall then comes out to challenge Cody to a strap match on July 7th. QT then takes out Arn Anderson before Brock made the save and started battering QT before he was pulled away by Cody.

GREAT: Up next the unlikely team of Eddie Kingston, PAC and Penta El Zero teamed up to take on the Young Bucks and Brandon Cutler. The story of this match was that PAC had no intention of teaming with Kingston, however when they eventually all worked together, they successfully got the victory. However one thing I massively wasn’t a fan of during this match was the fact that they are now acting like Brandon Cutler hasn’t wrestled before, even though he’s almost at the top of the table for having the most matches in AEW. Admittedly the vast majority of them were losses, but he never looked this bad in any of them.

MUST WATCH: The Pinnacle come out to the ring for the first time since their loss at Stadium Stampede. One by one each member responds to the challenges Inner Circle set last week, with every member accepting apart from MJF. MJF denied Jericho’s challenge and said he was too tired to do this anymore as he has nothing to prove. Jericho then came on the screen and along with the rest of the Inner Circle, they completely obliterated The Pinnacle’s limo. Hager drove a forklift into the limbo and lifted up by the windows while removing the roof in the process. Truly badass visual.

GOOD: Darby Allin says that next week he doesn’t want to replace Sting, so he will take on Sky and Page in a handicap match. Darby then tells Sting he wants him to stay home next week.

GREAT: In a pre recorded promo, Evil Uno revealed why he wants the TNT Championship on a truly fantastic promo.

GREAT: Miro defended his TNT championship against Evil Uno in a match where both athletes played their roles to perfection. Evil Uno played the perfect babyface, while once again Miro delivered in his heel role which he plays so well.

GREAT: Kenny Omega and ‘The Invisible Hand’ Don Callis come down to the ring to once again talk about the conspiracy against them. Jungle Boy then comes down and Omega actually cut a really damn good promo on Jungle Boy, on how he has potential but he can’t even talk. Omega says he’ll give Jungle Boy the mic for 5 seconds. Jungle Boy simply states ‘man you talk too much’ leading to a huge pop from the crowd before The Elite beat him down.

GOOD: Mark Sterling is backstage with Jade Cargill where they talk about boosting Jade’s brand. I’m not really sure why this was needed, but it was delivered well and it made sure the audience didn’t forget about Jade.

GREAT SQUASH: Lance Archer walks out, squashes his opponent in about 30 seconds, then leaves without a hint of a celebration. Truly badass no BS squash.

BAD: The Wingmen cut a promo calling out a Orange Cassidy for the way he dresses before Cesar will ‘mess up his face’ if he doesn’t upgrade is wardrobe. Firstly, who on Earth thought this would be a good promo to put on Dynamite. Secondly, this is the exact type of thing AEW made fun of WWE for doing when they first started and advertised themselves as a sports based product. At least the promo was performed well.

GOOD: Leyla Hirsch took on Nyla Rose in a match which gave both competitors a good showing. Very surprised/confused to see Nyla playing a complete heel role here considering last week she was the babyface in the Britt Baker segment.

GOOD: Britt Baker then cut a backstage promo on Nyla Rose, and condemned her for making fun of Leyla’s height, stating she would never do such a thing, ironically of course considering she has done before. Not a fan of this heel vs heel feud at all but Britt did good here

GREAT: In the main event, Hangman Page and 10 teamed up to take on Hobbs & Cage. The two teams had an absolute hoss fight which was entertaining from start until finish. Half way through the match Starks and Hook came out to attempt to help their fellow Team Taz members, however when Starks handed Cage the FTW title, Cage threw it away leading to Starks slapping Cage and Cage chasing him backstage leaving Hobbs on his own.

RESULT: Hangman and 10 win via pinfall

Overall tonight’s episode of AEW was a stronger episode in ring wise compared to the past few weeks, however still below the high average AEW has set themselves. Apart from the promo by The Wingmen, which was awful, the show was enjoyable from start to finish, but featured nothing I’d recommend to go out of your way to watch apart from The Pinnacle/Inner Cirlce segment.