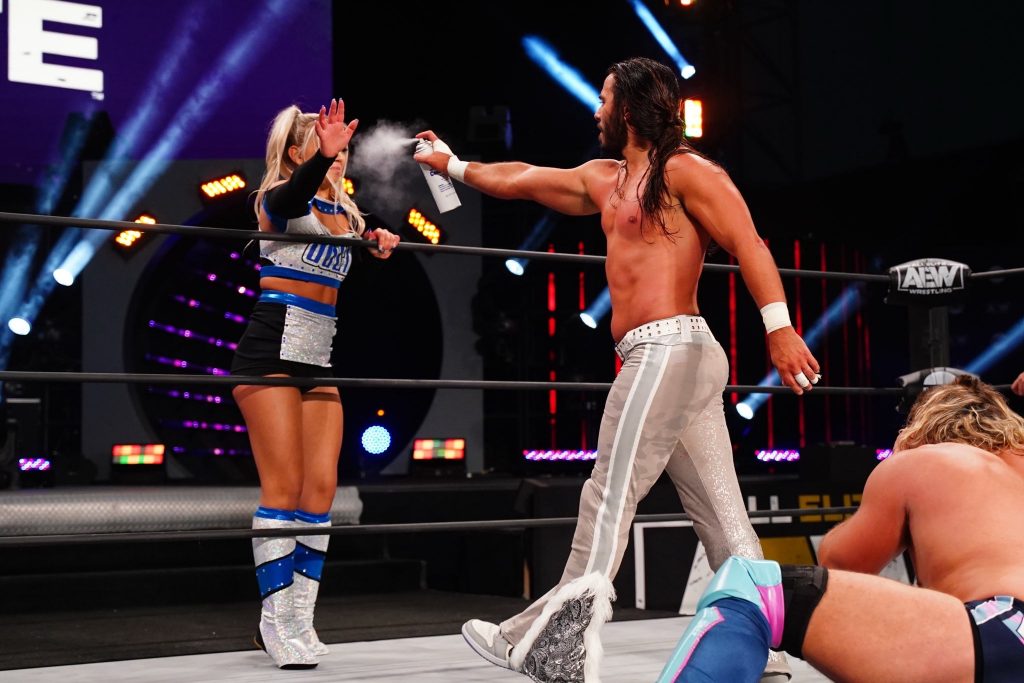 With just over a week until AEW’s upcoming PPV ‘Double or Nothing, the show was under pressure to build up the PPV considering the lacklustre build so far. Another note going into the show was that for the first time in weeks Dynamite would not feature a major match, and while you simply cannot expect a major match to take place every week on a wrestling show, it would be interesting to see based on the matches advertised which would main event the show.

GOOD: The show opened with Christian Cage taking on Matt Sydal with Taz on commentary. As per usual with a four man commentary booth in AEW, the action was barely focussed on and instead the storyline on the whole between Team Taz and Christian was talked about the entire match. Inside the ring the two competitors did well and worked a fairly slow but well put together match, and Sydal looked good in defeat.

GREAT: After the match Ricky Starks came out and cut a solid promo towards Christian, before the rest of Team Taz attacked Christian from behind. Hangman Page then came out to attempt to make the save, and had a fantastic sequence with Brian Cage, but in the end the numbers game caught up with him. Slightly weird that Dark Order didn’t help Page here, but the segment built up the Casino Battle Royal and Page vs Cage really well.

GREAT: In a pre recorded promo, Jon Moxley and Eddie Kingston talked about their climb up the tag team rankings in recent weeks, as well as talking about their opponents tonight ‘The Acclaimed’. As always these two bounced off each other successfully and the chemistry levels were off the charts.

GOOD: The Acclaimed followed this up with their own pre recorded promo. While of course not being able to top the interaction between Moxley and Kingston, these two did well and made the match feel a bit more important.

MUST WATCH: So I’ll be the first to admit that I was quite harsh to the raps by The Acclaimed when they first came into AEW, with the insults being quite bland and just feeling too cheesy, however recently they have improved a lot and today rap was simply hilarious and singlehandedly made this match feel important. During the rap Caster said Renee has been calling him up for an ‘Oral Session’, which of course is actually her podcast, and the double meaning worked really well.

GOOD: The match between the two teams imploded after the Renee Young ‘Oral Sessions’ diss and this made the match feel important from the get go. Several fun spots during this match, but nothing worthy enough to go out of your way to watch. This did what it needed to do and that was to build the tag team of Moxley and Kingston up.

GREAT: Tony Schiavone hosted an in ring interview with the team of Scorpio Sky and Ethan Page. Both members cut top tier promos, with Sky explaining how he use to look up to Sting, but this isn’t the same man he once looked up to. Sting then made his way to the ring before Darby got revenge on Sky and Page from behind. As Sky and Page attempted to escape, The Dark Order came out leading to Sky and Page changing direction and sprinting away. This segment was done really well, although with that said it still doesn’t exactly make sense why the team hates Darby so much. I guess after his loss, from Sky’s perspective it does make some sense, but today Sky’s focus seemed more on Sting while Page seemed more focussed on Darby strangely.

GREAT: The Pinnacle spoke about The Inner Circle embarrassing them last week in a pre recorded promo from a restaurant. MJF and Dax cut really great promos here, but the Shawn Spears beating the waiter up before Tully paid him off just didn’t seem necessary. I mean it does make Spears look like he’s going mad if that’s what they are going for, but that is a direction I really didn’t expect.

AVERAGE SQUASH: Shida took on Rebel in a squash match which featured some interruption on the outside from Britt.

GREAT: Kenny Omega and Don Callis visit Orange Cassidy in the doctors office after his neck injury last week. Callis gives Orange a contract which could mean that he would be out of the triple threat at Double Or Nothing, but would get a title match at a later date. OC rips the contract up before Kenny pitches the idea to him some more and they leave him with a contract and tell him to take some time to think about it.

GREAT: Inner Circle came out to the ring and each member delivered a solid promo, before Jericho accepted the Stadium Stampede challenge for Double Or Nothing.

GOOD: Jade Cargill once again is backstage with Tony, where she reiterates she doesn’t need a manager. Mark Sterling walks in and says he doesn’t want her to work for him, but he wants to work for her. She says she’ll think about it before telling him to walk away.

GREAT: Serena Deeb put her title on the line against Red Velvet in a match that proved Deeb had no ring rust at all from her time away. The two had great chemistry and put on a really well put together match!

GOOD: Backstage PAC went on a rant about The Elite and said that now he has his title shot there is nothing more they can do to stop him.

GREAT SQUASH: Ahead of his huge Double Or Nothing match against Cody, Anthony Ogogo took on Austin Gunn, who realistically should be number one in the men’s rankings considering he’s 10-0 in 2021, and made fairly quick business of him. Gunn showed resilience but it simply wasn’t enough in the end.

GOOD: SCU get asked backstage what’s next for them. Christopher Daniels walks away before answering but Kaz said CD has earned the right to do whatever he wants next.

GREAT: Miro came out to reveal that he will be issuing an open challenge on next weeks episode of Dynamite. Lance Archer then interrupted him to remind him they will be facing off at Double Or Nothing. The two threw insults at each other and created some excitement for their match at the PPV, which has not previously been built at all.

GREAT: In the main event The Young Bucks defended their AEW Tag Team Championships against the Varisty Blondes in a solid main event encounter. Young Bucks played the heel role faultlessly here, while the Varsity Blondes naturally fitted into the face role flawlessly.

When running a weekly show you can’t have standout matches each and every week, and this week for the first time in a while AEW did not have a high level match. However the in ring action was still good to great, and with just over a week until Double Or Nothing, storylines were built well towards the PPV. An interesting note about this episode was that there was only one pinfall finish on the entire show.