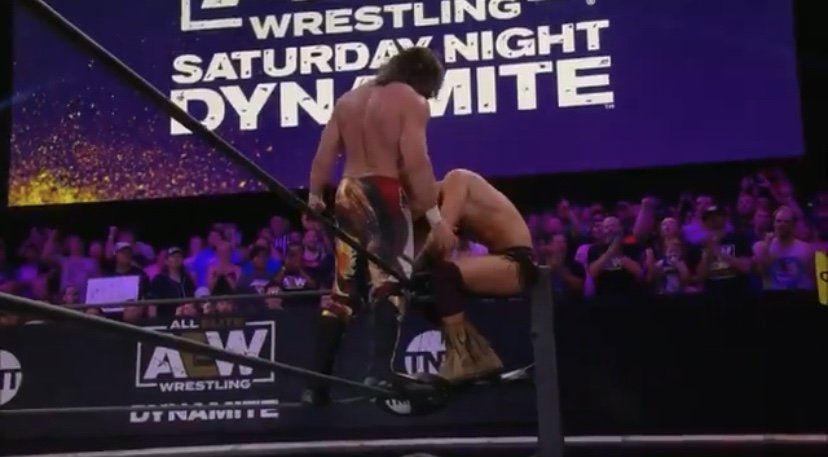 This weeks episode of AEW Dynamite was a Saturday night special featuring the highly anticipated bout between the AEW Champion Kenny Omega and fan favourite Jungle Boy. AEW attempted to stack the card from top to bottom in hopes that they could boost the recent disappointing television ratings.

GOOD: Saturday Night Dynamite kicked off with Alex Marvez interviewing Sammy Guevara as he is walking into the arena. Shawn Spears then took out Sammy with a chair from behind, ahead of Sammy’s match against MJF next week.

GREAT: The in ring action for the night kicked off with Hangman Page taking on Powerhouse Hobbs in a hell of an opener. Page’s head being split open fairly early on did slow the page down for a few minutes, but they built it back up with the final few minutes being fantastic! Towards the end of the match Starks attempted to take out Page with the FTR title, but Brian Cage came running out to get his title back before chasing after Starks. Page winning with the dead eye made the move feel more important than it has done in a while.

GREAT: A video package airs hyping up the main event between Omega and Jungle Boy, and this almost convinced me that Jungle Boy had a chance.

GREAT: Backstage the Young Bucks cut one of the best promos of their heel run so far. The two spoke about the teams they have taken out so far, and the achievement of becoming the longest reigning AEW tag team champions in the short history of the promotion. Brandon Cutler continuously trying to cut in and being cut off was a great touch.

MUST WATCH: Santana & Ortiz’s former manager, Konan, then met FTR’s manager Tully Blanchard in a face to face debate. These two, especially Konan, absolutely killed it with their verbal shots, creating a lot of excitement for the inevitable tag match between FTR & Proud & Powerful. When things turned sour, Konan brought out PNP for assistance, however Tully was once again one step ahead as FTR were behind the masks and took out the wrestling legend.

GOOD: Dante Martin then took on Matt Sydal in what was a fairly short but very fun matchup between the two. Dante Martin really out his name on the map as a singles star, and I’m certain that he’ll have significantly more supporters after this showing.

GREAT: Jungle Boy is backstage and talks about how he is feeling ahead of his huge title match tonight. Christian Cage then interrupts and cuts a promo offering Jungle Boy some advice, stating that rather than being happy with the position he is in, he should be pissed off. This was top notch stuff.

GOOD: To follow this up, Jade Cargill and Mark Sterling had their weekly promotional package where they announced that all Jade shirts will be 10% off. The idea for this segment sounds awful, but it was delivered excellently and Jade ripping the dark order shirt with little effort was a nice touch. However like I stated last week, these segments are getting old fast. Hopefully Jade gets a proper feud shortly.

GREAT: The pinnacle then were interviewed by Alex Marvez backstage. MJF cut a promo on why he took out Dean Malenko last week, and how he did him a favour by giving him an early retirement. Jericho and Hager then came out of nowhere and attacked them, leading to the two teams brawling all the way to the ring. The three on two advantage quickly became too much for The Inner Circle, before Sammy G came out with a chair and made a save. To end the segment Sammy G cut a promo on why he will prove next week that AEW have been wrong to make MJF the young face of the company, instead of him.

AVERAGE: Bear Bronson then took on Ethan Page in what was a good showing for Bronson. Page did get the win he needed going into the Darby match, however the fact the victory was Aidee by Scorpio Sky protected Bear Bronson for a possible tag feud between the bears and The Men Of The Hour.

GREAT: After the match Ethan Page grabbed a mix and challenged Darby Allin to a coffin match at Road Rager in two weeks time.

GOOD: The camera then cut to Britt Baker and Rebel backstage where the two laughed at the fact Vicky Guerrero will be returning to the ring next week to face them.

GOOD: Vicky Guerrero then reveals that the reason she requested the tag match next week was to give Britt an appetiser, as she’ll be defending her AEW women’s championship against Nyla Rose on night two of Fyter Fest.

AVERAGE: Kris Statlander then faced her greatest challenge since her return, ‘The Bunny’ Allie. Surprisingly Allie was in control for the majority of the match, however no matter what she tried she could not get the job done. During the ending seconds of the match, The Blade attempted to help The Bunny get the win by handing her the brass knuckles, however Orange Cassidy then came up from behind and put them in his pocket, which was enough to distract The Bunny and allow Statlander to get the win.

GOOD: After the match the Hardy Family Office teamed up to take out Orange Cassidy after he assisted Statlander in the win.

GOOD: QT Marshall is interviewed backstage and he quickly reveals he is not happy about the fact Brock Anderson won wrestler of the week last week, when he didn’t win it when he pinned Cody Rhodes two weeks ago. QT then goes on to say it won’t matter, as he’ll prove himself when he defeated Rhodes in a strap match at Road Rager.

GOOD: Brian Pillman Jr cut a promo on Miro ahead of their TNT championship match next week. Pillman was confident and stated that Miro had a messiah complex and on Wednesday night he will force Miro to check his ego.

GREAT: Before the main event, the camera once again cut to backstage where Eddie Kingston and Penta cut a promo on the Young Bucks next week. Kingston said he knew the only way he could really hurt the young bucks, as much as they hurt him, was to take away their tag team championships and force them to realise they aren’t the best. Simple promo concept, but as always Kingston delivered it amazingly.

MUST WATCH: In the highly anticipated main event, Jungle Boy had his first AEW championship opportunity against Kenny Omega. Before the bell ring the referee kicked out everyone at ringside, ensuring that it would be a one on one contest. The layout of the match was as predicted, with Kenny Omega controlling the match but Jungle Boy coming back with big spots to get the crowd behind him. Despite the fact it was a fairly small crowd, the fact that they were so close to the ring made it sound a lot louder than it actually was. Of course in the end Omega retained, but there were a couple of moments during the match where there was actual belief Jungle Boy could get the upset win, and this resulted in Jungle Boy coming out of the match looking like an absolute star.

GOOD: After the match The Good Brothers and Omega took out Jungle Boy before Christian Cage came out to make the save. The Hardy Family office then attempted to take out Christian, however he got the upper hand on them until the Bucks took him out too. They are seemingly setting up Christian Cage vs Omega before the inevitable Hangman match.

Overall this was one of the strongest episodes of AEW Dynamite of the year so far. Everything about the first hour was good, and while the pace did slow down slightly for the first half of the second hour, it quickly came back to life for a fantastic main event. The main issue with the episode were the amount of distractions each match had. I understand not wanting talent to lose clean, but having distractions in nearly every match is everything AEW were originally against when they started the promotion.