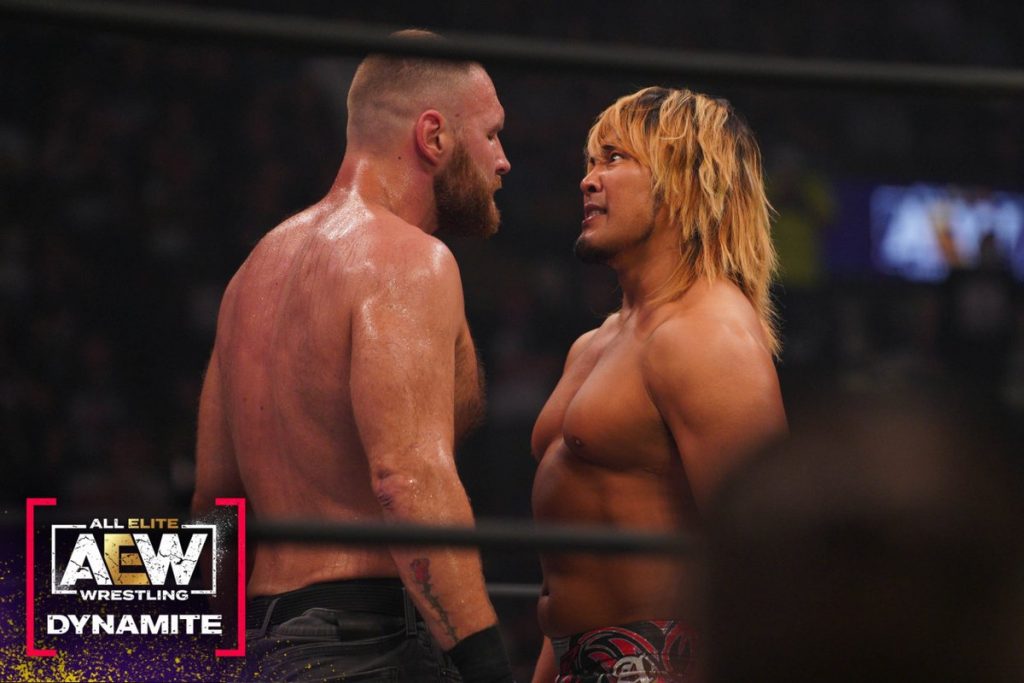 Overall: It was the go home show before Forbidden Door, and we got some of the answers we needed heading into the co-promoted event. I’ll start with Okada. The coin dropped, we got him, and this fatal 4 way is going to be excellent. Tanahashi and Moxley were able to coexist tonight, but we’ll see what it looks like for the AEW World Championship this Sunday. Thunder Rosa has a new challenger for the AEW Women's World Championship in Thunder Rosa, and The Young Bucks are on the card in a huge multi man match with the rest of the Undisputed Elite. Oh Yeah, Christian didn’t just turn on Jungle Boy, he told his Mom some things that are too vulgar to type, and he may have even convinced Luchasaurus to stick with him.

On the go home show to Forbidden Door, AEW multiple matches in place to help provide a preview for it. United Empire’s Will Ospreay and Aussie Open take on Roppongi Vice and Orange Cassidy. The final spot in the All Atlantic four way is going to be filled by Malakai Black or Penta Oscuro. Bryan Danielson and Christian both get to get things off of their chests. The Main Event has Lance Archer and Chris Jericho Vs Hiroshi Tanahashi and Jon Moxley in a star studded match. All this and much more.

AMAZING Bryan Danielson in ring Interview: Tony Schiavone is in the ring for an interview but Bryan quickly takes the microphone from him and informs him that he won’t be giving it back. Unfortunately he is not cleared for the next few weeks. He will not compete at Forbidden Door, he will not compete at Blood and Guts. What he will do is provide a replacement in these two places and they are his choice. Bryan is always awesome on the microphone and this is him in peak form. He’s got the one person he trusts to take his place at both Forbidden Door and Blood and Guts. We will find out who it is at both events, but not until then! Zack Sabre Jr. interrupts the end of Bryan’s segment but we will have to wait to find out who will face Sabre Jr. until later.

Jon Moxley Promo: Backstage promo from Moxley here. This one is regarding Blood and Guts and he talks about the fireball sent Kingstons way as well as the other things they did to his friends. Moxley is willing to push it to an entirely new level at Blood and Guts. He then turns his attention to Tanahashi, ready for this major showdown. This was a vintage Moxley promo and the crowd loved it.

GREAT United Empire, Aussie Open, Kyle Fletcher and Mark Davis, and Will Ospreay Vs Roppongi Vice, Trent Barretta and Rocky Romero, and Orange Cassidy: The entrances both provide relevant pops before the match even starts and this is as good of a preview for Forbidden Door as were going to get. The match starts quickly with Rocky Romero and Kyle Fletcher exchanging holds. Mark Davis is brought in and so is Trent Baretta but only briefly. Orange Cassidy comes in now, and the crowd is still in love with Orange. His work is excellent and while the gimmick is controversial there is no doubt he’s one of the most popular wrestlers in AEW. This is such a fun 6 man tag match, the crowd is hot throughout on top of the fact that both the popularity of Orange Cassidy and the United Empire is undeniable. Orange Cassidy lands an Orange Punch to win the match. Jeff Cobb and Great O Khan come down to join, but not before FTR make their presence felt to even the odds.

MUST WATCH Christian Promo: This is a promo that is virtually indescribable. It’s Christian Cage at his absolute best, and he’s not only turned heel but the crowd knows it. Not only that, Jungle Boy is his primary target but it’s not just that, he’s seemingly formed an alliance with Luchasaurus. I simply can’t give you more information than that. The promo is off the charts, it’s properly

Young Bucks and ReDRagon backstage promo: Too short to rate but the Bucks are definitely excited about their matchup for Forbidden Door teaming with Bullet Club against Sting.

GOOD Penta Oscuro Vs Malakai Black – Winner goes to the AEW All-Atlantic Championship Fatal Four Way at Forbidden Door: Both entrances include all the traditional theatrics expected from each competitor. The match starts quickly with Penta sweeping Malakai’s leg before soaring over the top rope with a tope con hiro. Malakai re-establishes some momentum in the match but is hit with an awesome backstabber from Penta that is worth going back to see. Jim Ross just called Penta a, “Squid,” given the fact that he was in a half Octopus Stretch, applied by Malakai Black, and personally, I’m not sure I’ve laughed harder for a call in 5 years. Malakai is able to pick up the victory with a thunderous Back Heel Kick. Pac walks to the ring to stare down Black, but is interrupted by Miro who cuts a promo about the match this weekend at Forbidden Door.

GREAT Hangman Adam Page Vs Silas Young: Silas Young makes his entrance first, and as the Milwaukee local, he gets a nice pop from the crowd. Hangman does as well on his entrance. The start is stiff, both men exchange chops and strikes. Page hits his signature moonsault from the top rope to the outside and then he tries to line up the Buckshot Lariat but Silas Young is able to roll out of the way. Young is able to use his power to ground Hangman Page and even plants him with a neckbreaker for a near fall. Hangman comes back with his signature fallaway slam and nip up, but Silas is right back on him. Page isn’t done yet though and this ROH rivalry is continuing in AEW. Adam Cole oddly goes silent on commentary but is greatly benefited by the veteran influence of Tony Shiavone. Back in the ring Hangman Page drills Silas with the Buckshot Lariat for the victory and that’s when it happens.

AMAZING Adam Page, Adam Cole, Jay White Promo: The match ends and immediately Adam Cole interrupts things to start story time. He’s interrupted by Switch Blade Jay White. White talks about his history with Cole, but he’s not exactly ready to give Cole the one on one shot. Not just yet, it isn’t just Cole, it isn’t just Hangman. In fact it is both. Then there’s more. Coin drop. Okada. Forbidden Door. Fatal Four Way. Nuff Said. Okada and Page staredown in the center of the ring to end the segment.

Jade Cargill Backstage Promo with the Baddies: Cargill starts the promo by announcing that Red Velvet is hurt and Stokley asks for a drumroll before he announces that the Baddies are hiring. Too short to rate but that was a fun promo.

Athena and Kris Statlander promo: It’s a relevant response, it’s also too hard to rate, and the Baddies are gonna have to take a good hard look in the mirror before they come after Athena, Statlander and their new friend Willow Nightingale.

AVERAGE Toni Storm Vs Marina Shafir: Shafir starts with a boot and she is very aggressive going after Storm in the beginning of the match. Toni turns things around and is able to hit a beautiful shotgun dropkick. Marina lands a bunch of stiff offense on Storm but the crowd is much quieter than they’ve been all night. Outside the ring Shafir is in control until Storm lands a tornado DDT, but it’s fleeting. Storm wins via rollup and then is immediately attacked by Nyla Rose as well as Marina Shafir. Toni Storm and Thunder Rosa show respect but stare each other down to end the segment.

Results: Toni Storm by Pinfall via Roll Up.

Darby Allin and Sting Promo: They call out the Undisputed Elite for Forbidden Door. It’s that simple, it’s too short to rate but Sting said it best, “it’s showtime.”

GREAT Hiroshi Tanahashi and Jon Moxley Vs Chris Jericho and Lance Archer: Jericho and Archer enter first followed by Tanahashi and then Moxley. The bell rings and chaos ensues before the match actually starts with Tanahashi and Lance Archer in the ring. Moxley attacks Jericho against the guardrail and then Sammy Guevara tries to interfere in the match. Lance Archer is an absolute killer in the ring, and on top of that he’s as smooth as anyone in the business. Tanahashi is caught in The Walls of Jericho but is saved by Moxley. Archer is tagged in and then hit with a Paradigm shift by Moxley and then a Frog Splash from Hiroshi Tanahashi for the win. Tanahashi and Moxley staredown to end the show. Eddie Kingston runs down and attacks the Jericho Appreciation Society and the show ends in the middle of the chaos as Minoru Suzuki calmly walks down the ramp.

Overall: It was the go home show before Forbidden Door, and we got some of the answers we needed heading into the co-promoted event. I’ll start with Okada. The coin dropped, we got him, and this fatal 4 way is going to be excellent. Tanahashi and Moxley were able to coexist tonight, but we’ll see what it looks like for the AEW World Championship this Sunday. Thunder Rosa has a new challenger for the AEW Women’s World Championship in Thunder Rosa, and The Young Bucks are on the card in a huge multi man match with the rest of the Undisputed Elite. Oh Yeah, Christian didn’t just turn on Jungle Boy, he told his Mom some things that are too vulgar to type, and he may have even convinced Luchasaurus to stick with him.