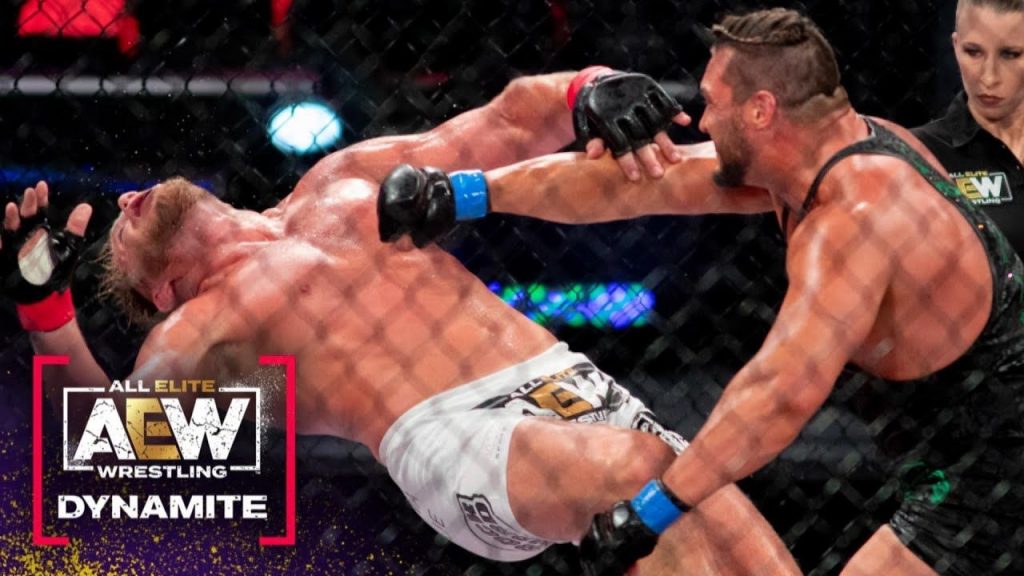 With television ratings dropping significantly over the past few weeks with Dynamite temporarily moving to Friday nights, the promotion were undoubtedly under pressure to boost them this week ahead of the return of fans.

MUST WATCH: Dynamite opened with what is easily going to be one of, if not the most, controversial match of the year, so much so that I’m not even going to consider it a match, and instead just a segment, as Hager took on Wardlow in an MMA cage fight. This definitely wasn’t for everyone, but for me, I loved it. Don’t get me wrong, I hope they don’t do this on a regular basis, but as a one off, this was unique and interesting. So many wrestling fans have taken to Twitter to claim that if MMA fans saw this they would be furious, but as a fan of both I disagree. Of course it wasn’t a realistic MMA fight, but if it was, what would be the point in even doing it? If you want a realistic fight go watch UFC or Bellator. Both men did a great job in this match and the crowd was on fire for it. Hager won by submission.

GREAT: After the match Wardlow and Hager were about to touch gloves before Spears took out Hager leading Jericho coming in to even the odds. MJF then entered the cage and took out Jericho, before finally taking out Dean Malenko. Sammy G then came in to attempt to take out MJF for what he just did.

GOOD: Kazarien, Kingston and Penta El Zero cut a backstage promo on the Good Brothers and Matt Jackson ahead of their match later tonight.

GOOD: Backstage Taz tells Ricky Starks that him and Brian Cage need to sorry their issues out. Taz then puts the challenge out to Hangman Page for a one on one match with Hobbs next week.

GREAT: Darby Allin then had to once again battle the odds as he took on Scorpio Sky and Ethan Page in a handicap match. Everyone did their jobs fantastically during this bout, with Ethan Page once again getting significant heat fairly naturally.

POOR: Ahead of Cezar’s match against Orange Cassidy, The Wingmen cut another hard to watch cringe promo.

POOR: Unfortunately the match between Cassidy and Cezar was just as uncomfortable to watch as the promo was. The heel team got heel heat, while as always Orange Cassidy was loved by the crowd, but the fact the Wingmen attempted to give Orange Cassidy a makeover during the match was simply unforgivable.

GREAT: Backstage Jungle Boy was about to be interviewed by Alex Marvez, however Kenny Omega, Don Callis and Nakazawa drove in on a golf cart and Omega said that last week Jungle Boy embarrassed him, so right now he wants a one on one backstage street fight, and jungle boy can have the first shot. Jungle Boy reluctantly accepts, however Nakazawa attacks him from behind and it turns into an ambush. Jungle Boy eventually gets back on top and Omega and Callis make the mistake.

GOOD: Matt Hardy and his team are interviewed backstage about Christian Cage, before Cage himself comes in looking for a fight. Hardy enterprises successfully lock Cage inside the storage area, before Hardy reveals he has an offer for him.

GOOD: The son of Arn Anderson, Brock Anderson, made his long awaited debut teaming with Cody Rhodes against Solow and QT Marshal. Admittedly Brock looked slightly green at times and awkward during some spots, however in other moments in the match you could see the potential he has. Realistically he’s probably not ready for national TV yet, but give him a year working a couple of times week on the indies, and this guy could do big things in AEW!

GREAT: Andrade El Ídolo had an interview with Jim Ross where he revealed that he believe he deserves a shot for both the TNT & AEW World Titles. He also stated that him and Vicky have a surprise up their sleeve.

AVERAGE: Penelope Ford then took on Julia Hart in a match which gave Hart a good showing while continuing to build up Penelope Ford as a top star in the division.

GOOD: Miro came out post match and took out The Varsity Blondes and stated that he felt it was unfair that now Kip is out injured, Ford doesn’t have anyone to look after her.

GOOD: Backstage Britt was having her weekly interview with Tony before Vickie Guerrero interrupted and announced in two weeks time Britt will tema up with Rebel to take on her and Nyla Rose……what. Good segment though.

GREAT: A brilliant video package building up FTR vs Santana & Ortiz aired. Looking forward to this whenever it happens.

AVERAGE: Jade Cargill and Mark Sterling made the announcement that Jade now has a partnership with the four seasons in Toronto. Jade’s awesome, and this partnership could be too, but these segments are getting beyond repetitive now.

GREAT: In the main event Matt Jackson & the Good Brothers defeated Penta El Zero, Kingston & Kaz, with help from Nick Jackson, in what can only be described as a typical Dynamite trios match. Lots of innovative offenders and spots, but easily could be a bit too much for some viewers. An entertaining end to the night regardless.

RESULT: The Elite win via pinfall

Overall tonight’s episode of Dynamite was entertaining from start to finish and felt slightly easier to watch than most weeks. The MMA fight undoubtedly won’t go down well with everyone, but for what it was I enjoyed it, as long as it’s just a one off. There were no stand out matches on the show, but the in ring quality for consistently good. For a second week in a row the weakest part of the show involved the Wingmen.