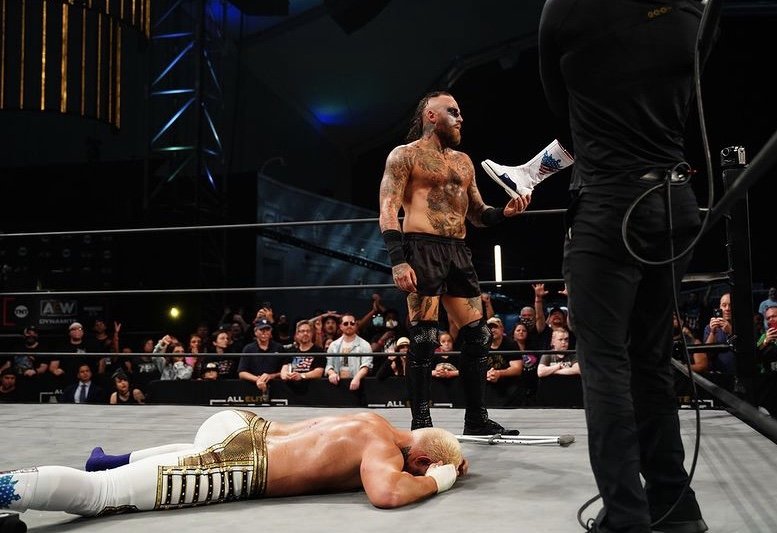 For this weeks episode of AEW Dynamite, Tony Khan’s wrestling promotion returned to Daily’s Place for the first time since they returned to the road last month. The show was headlined by Malakai Black taking on Cody Rhodes in a match which undoubtedly was PPV early.

POOR: Before I get into the review of Jericho vs Juvi, I want to quickly clarify and put some respect on Juventud Guerrero’s name. He is a legend who is often forgotten about and many people don’t realise how innovative he was and how much of an impact he had. However to say this match showed his in ring rust is an understatement. Jericho has been hit and miss at times as he has gotten older, and I’ll say it again, the fact he can wrestler as well as he does and be as innovative as he is at his age is phenomenal, but pairing an ageing Jericho with someone with as much ring rust as Juve, is a recipe for disaster. However, the match truly didn’t go as bad as it could have, and the last few minutes were really fun. Admittedly the match was helped by the hot crowd, but still, it wasn’t horrible at all. However, there were multiple issues with the match including the fact that Jericho, the Babyface, attempted to remove the mask of Juve, which is obviously a common heel move. The crowd didn’t know how to react to this and it was a horrible mix of cheers and boos. Another issue was that they weren’t facing the hard cam during multiple moments including when Juve had a submission locked in on Jericho. The final issue of the match was that the crowd didn’t understand the slightly complex stipulation, and I feel like it should have been explained a lot clearer to them before the match started. The commentary team did a good job explaining it for the people at home thankfully.

GOOD: After the match Wardlow attacked Jericho and MJF revealed that next week Wardlow will take on Jericho with MJF being the special enforcer.

GOOD: Dasha then interviews what is meant to be the Death Triangle, but they reveal that PAC’s travel was mysteriously cancelled. Andrade then walks in and asks Fénix and Penta to work for him, but they both reject and blame him for PAC’s travel issues

GREAT: In a backstage interview Hangman Page walks in and tells them that he is done with them as he cost them their tag title opportunity last week, and he needs his space.

GOOD: Moxley, Kingston & Darby Allin defeated 2.0 and Garcia in what was a really fun 6 man tag team match which gave both teams a good showing, but didn’t take up too much time. I often get bored of these short 6 man matches on Dynamite, but this was done very well.

GREAT: A promo package then aired hyping up the inevitable match between Cage and Team Taz. Both parties cut great promos during it.

GREAT: Backstage the Super Elite are celebrating the fact Hangman has left the Dark Order, and all members cut solid promos explaining why there is no one left. Anderson and Gallows, offer the Dark Order an Impact Tag Title shot for next week on AEW Dynamite.

GOOD: Christian Cage took on The Blade in what was a very typical face vs heel encounter. The Blade hid his brass knuckles in the turnbuckle, however before he could use them Christian won with a spear

GOOD: Up next a video package aired that revealed that thankfully FTR and Santana & Ortiz will have a rematch once Wheeler is cleared. Hopefully they get the main event slot in their next encounter.

GOOD: Britt Baker comes out for an interview with Tony Schiovane, however she is followed by Red Velvet and they agree to a match next week on the debut episode of Rampage.

GREAT: Backstage Chavo reveals to Andrade that he has found someone to work for them. Fuego then walks in and they tell him to shine Andrade’s shoes, but as he goes to do so Andrade takes him out and Chavo reveals that this was all a warning to the Lucha Bros.

MUST WATCH: Tony Schiavone is then in the ring with Hangman Page, but before Page is able to say anything The Super Elite come out to the ring. Kenny Omega says they’ll never accept Hangman back into the Elite. Hangman tries to explain that’s not what he’s here to do, but Omega talks over him. Hangman eventually takes a swing at a Kenny before the entire elite start beating him up. The Dark order then comes out to help, but Uno and Grayson stop them shouting that this is what Hangman wanted. The Elite Hunter then comes out to help, but quickly gets taken out as well.

GREAT: Miro defended the TNT championship against Nightmare factory student Lee Johnson. Miro looked like an absolute beast in the match and throughout the first few minutes he looked unstoppable. Towards the end of the match Lee came back into it, and he ended up having a fantastic showing, but it eventually was ‘game over’ for him as Miro picked up the win

GOOD: Christian Cage then revealed backstage that he is next in line for the AEW championship

AVERAGE: Leyla Hersh then took on The Bunny in a number one contenders bout for the NWA women’s championship. This match wasn’t mind blowing by any means, but considering the little amount of time they had, this match definitely topped my expectations, with the last couple of minutes being fantastic.

GREAT SQUASH: In the main event Malakai Black took on Cody Rhodes in a match which started fairly slowly, but resulted in Cody Rhodes being beaten in less than 5 minutes after going through a table from the top rope, and then taking a black mass kick. Malakai Black looked like a complete monster and this was done near perfectly.

MUST WATCH: After the match Tony Schiovane went to the ring to ask Cody his thoughts once he came back into consciousness. Cody then cut a fantastic promo admitting that the EVP’s really did have issues behind the scenes, but confirmed he loved those guys no matter what. He then hinted that he would be retiring and took his boot off and left it in the ring. Malakai Black then took him out from behind as he was about to say his final words. Absolutely fantastic segment.