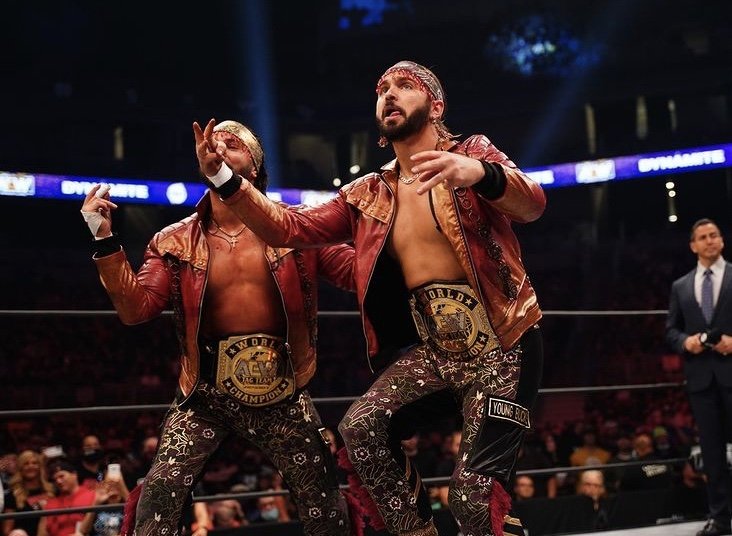 With less than a month to go until their All Out PPV, AEW desperately needed to start building up the card. The show was also the first of two AEW shows taking place in Pittsburg this week, with the debut of AEW Rampage taking place from the same arena only two days later.

GREAT: The show opened with MJF cutting a promo from backstage ahead of Wardlow taking on Chris Jericho in the forth labour of Jericho later tonight. To end the promo, MJF said that if Jericho does somehow beat Wardlow, he’ll still beat him at All Out. Wardlow then reassures Maxwell that he will beat Jericho tonight, before MJF says ‘Just like how you beat Cody in the steel cage match’ before walking away. Wardlow then crushes an apple to end the segment.

MUST WATCH: Kenny Omega and The Young Bucks took on the team of Dante Martin and the Sydal Brothers in what turned out to be a hell of a fast paced opening contest. Dante Martin undoubtedly was the star of the match, with the majority of the crowd seemingly not knowing who he was at the start of the match, but as the encounter went on he was getting the biggest reactions by far. The possibility of a match between him and Omega is almost mouth watering.

GREAT: After the match, Christian Cage and the Jurassic Express came out to come face to face with the Elite. Don Callis confirmed that Omega would be facing Christian at All Out. However, Christian went on to reveal that he will be facing Omega for the Impact title this Friday on Rampage, and Jungle Boy added that they will be challenging the Young Bucks for the tag team titles next week on Dynamite.

GREAT: A vignette then aired of Malakai Black speaking about defeating Cody Rhodes last week. Black noted that whoever was next to step up to him, would quickly realise how small their shadow is.

GOOD: Miro revealed that he will face Fuego Del Sol this Friday on the debut episode of Rampage, and if Fuego wins, he will get an AEW contract.

GREAT: Darby Allin took on top independent star, Daniel Garcia, in what was a really enjoyable but fairly short match. García showed off his incredible technical game, and Darby Allin looked great as per usual.

GOOD: Backstage Death Triangle, one by one, cut promos on Andrade, before PAC told Penta and Fénix to not worry and focus on the tag gold, as he will focus on Andrade.

AVERAGE: Matt Hardy and Private Party took on the team of Orange Cassidy, Wheeler Yuta and Chuck Taylor in what was a massively overbooked 6 man tag team match. The entire Hardy Family Office gimmick is beginning to get old fast, with more names seemingly being involved every week.

GOOD: Backstage Andrade begins cutting a promo on PAC, however after each line Chavo cuts him off and continues for him. At the end of the segment Chavo suggested that Andrade should face PAC at All Out. Andrade then reminded Chavo who the boss is. It seems like this relationship between Andrade and Chavo won’t be lasting too long…..is Ric Flair next?

GOOD: A Santana and Ortiz promo package airs where the duo talk about a potential rematch with FTR.

AVERAGE: The Young Bucks were playing basketball while cutting a promo backstage, before Luchasaurus and Jungle Boy came in and scored against them, leaving the Young Bucks furious.

GOOD: A promo package then aired hyping up the main event of the debut episode of AEW rampage, which will be Britt Baker vs Red Velvet.

GREAT: Britt Baker then came out and cut a promo on Red Velvet in front of her hometown crowd. Red Velvet came out to try and make a statement at the end of the segment by taking out Britt, but she failed.

GOOD: A video package then aired of Ricky Starks challenging Brian Cage to meet him face to face in the ring next week on Dynamite. Cage accepted.

GOOD: The Impact Tag Team Championships were defended on AEW for the first time ever, as the good brothers defended against Stu Grayson and Evil Uno of the Dark Order.

GOOD: QT finally came out to ‘apologise’ to Tony Schiovane, however QT apologised for what he was about to do to Tony’s son. QT then delivered a blow to the stomach of Tony’s son, before Paul Wight came out and took out Alex Solow as QT retreated.

GOOD: In the main event Wardlow absolutely obliterated Chris Jericho with nearly 10 power bombs and an F10. However Wardlow was instructed to unleash as much damage on Jericho as possible, meaning he never went for the pin. After MJF was caught cheating, he was sent to the back. While the referee was distracted, Jericho used his bat and took out Wardlow before hitting the Judas Effect, meaning that Jericho got the win.

GOOD: After the match MJF revealed that their match will take place next week, and if Jericho uses the Judas effect during the match, he will be disqualified.

The first hour of this weeks edition of AEW Dynamite was undoubtedly better than the second, with an absolutely fantastic six man tag team match opening the show, and making Dante Martin a star in the process. Over the last year AEW have perfected the balance of including enough wrestlers on the show, whether that’s through a match or a video package, in order to keep everyone relevant, while also ensuring the show doesn’t become too much to keep up with and overwhelming. However this weeks edition, especially during the second hour, featured far too many video packages, to the point where it must have become somewhat frustrating for the crowd to watch. Another issue was the fact that both Nyla Rose and Kris Statlander are top contenders in the women’s division, yet the match between them was only four minutes long. AEW’s attitude towards their women’s division, when the women’s title isn’t involved, is becoming increasingly worrying.