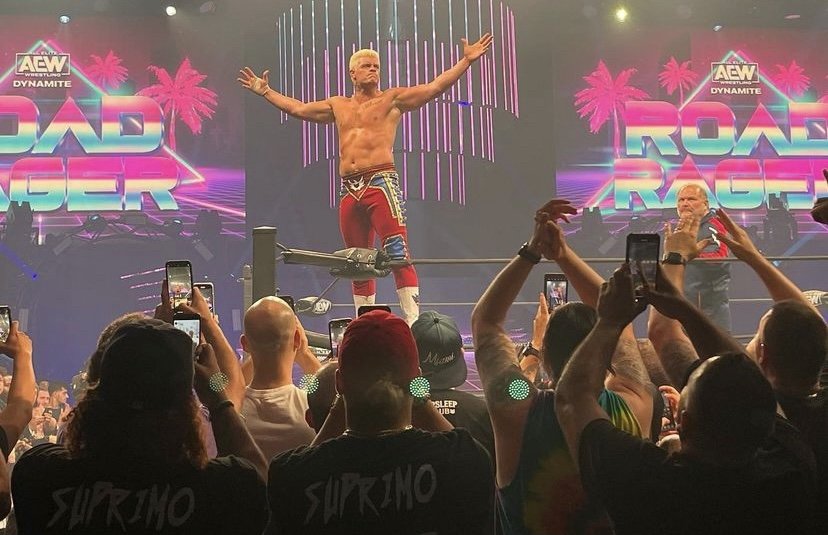 GREAT: AEW opened with Cody Rhodes taking on QT Marshal in a strap match. Despite the crowd seemingly not quite understanding the rules of the match at the start, as it went on they seemingly gained more and more of an understanding and Cody’s win at the end got a huge pop. During the match the lights noticeably all went out, seemingly teasing something for later.

GREAT: Shawn Spears cuts a promo backstage about the chairshot he gave to Sammy Guevara last week. Spears claims it was the second best chairshot he has given in AEW. Sammy G then comes out of nowhere and takes Spears out.

MUST WATCH: Kenny Omega and Don Callis come out to the ring to talk about how nobody is left to challenge Kenny. Evil Uno then came out for a second week in a row to mention Hangman, before Omega took him out leading to a fight between the Elite Bullet Club and the Dark Order. Hangman Page eventually came out and helped Dark Order get the upper hand. The segment ended with Omega and Page staring off in the middle of the ring.

GREAT: Jim Ross interviewed Ethan Page and Darby Allin ahead of their coffin match next week. Ethan Page cut a brilliant promo on why he can’t stand Darby.

GOOD: FTR & Wardlow then teamed up to take on Santana, Ortiz & Hager in a six man tag team match. The match was nonstop action from start to finish and FTR helped Wardlow get the win without the referee seeing.

GREAT: A video package then aired which announced that next week Karl Anderson would face Jon Moxley for the IWGP US Heavyweight Championship. During the package, Anderson cut one of the best promos of his entire career on Moxley.

MUST WATCH: Up next MJF revealed his stipulations to Jericho. As announced last week, Jericho would have to accept and beat all of these stipulations in order to ‘earn’ a match with MJF. The segment started with a fan jumping into the ring which got the crowd invested into the segment from the start, despite this of course not being planned. MJF and Jericho once again showed their phenomenal chemistry together, and once Jericho accepted the stipulations, he took out MJF and got a huge pop from the crowd.

GREAT: In a backstage interview with Tony Schiovane, Britt Baker revealed she blames Tony Khan for Rebel’s injury. She then went on to say that she hopes Vicky Guerrero is happy with her ‘Blood Money’, and next week they might as well host Dynamite from Saudi Arabia….

GREAT: Andrade then made his All Elite Wrestling debut in a match against the number five ranked Matt Sydal. Andrade looked great in his debut, and the crowd were extremely invested into the match.

GOOD: A promo package then aired hyping up the Matt Hardy vs Christian match which will take place next week

MUST WATCH: Tony Schiovane was in the ring once again, but this time he introduced Arn Anderson to the ring. Anderson began cutting a promo on what was next for the nightmare family, however for the second time of the night, the lights went out. The lights eventually came back on and Malakai Black was in the ring and he took out Arn Anderson with a Black Mass kick, before Cody attempted to make the save and got taken out as well. Fantastic surprise debut for Black.

GOOD: Orange Cassidy and Kris Statlander then teamed up to take on The Bunny and The Blade in mixed tag team action. This was a typical Orange Cassidy vs heel match with the heels getting frustrated by Cassidy’s antics, but Cassidy still outsmarting them in the end.

GREAT: Tony Schiovane is at ringside interviewing Dan Lambert of American Top team, before he takes the mic and storms into the ring and cuts a Jim Cornette style promo on the company. Lance Archer then stormed into the ring and took him out.

GREAT: In the main event the Young Bucks defended their AEW Tag Team Titles against Eddie Kingston and Penta El Zero in a street fight. This was the typical over the top street fight you would expect between these two teams with tons of outside interference and big moves. The thumbtack spots were brutal and the crowd were heavily into the match.

Despite the in ring action being slightly under par for the high standards Dynamite has set itself in recent times, AEW absolutely delivered with Road Rager. The most notable improvement from the last time they were on the road was the fact that they had more non wrestling in ring segments across the show now, rather than just one per episode like they historically had before the move to Daily’s Place. The production levels were fine and on first watch did not notice a single mistake, not even an echo when talking like they have historically had many issues with. However the new camera angles and lighting did make the show feel slightly over produced for my liking. The surprise debut of Black and the fantastic Omega and Hangman segment were undoubtedly the highlight of the show. 7.6/10