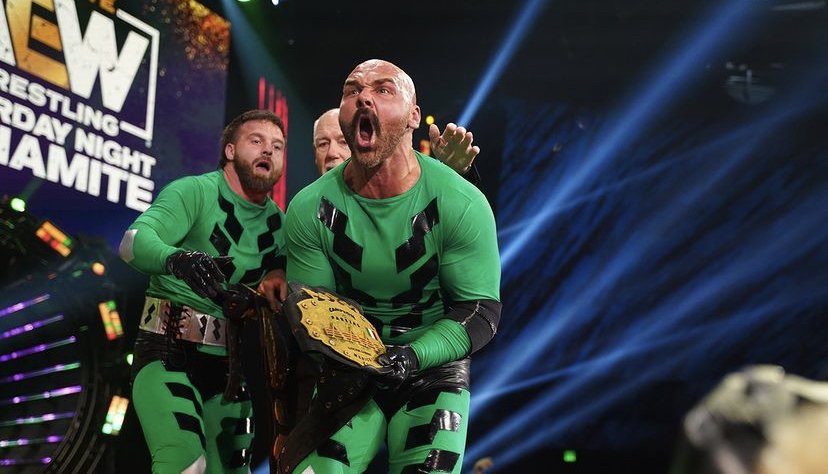 It’s a special Saturday night and you know what that means! Dynamite is live on a Saturday night instead of its usual Wednesday night time slot! Scheduled for the show is Bryan Danielson against Bobby Fish and The Lucha Bros against Andrade El Idolo’s mystery tag team. Let’s hope this Dynamite delivers as they have been hit or miss the last few weeks. I’m ready, are you?

GOOD: The show kicks off with CM Punk making his entrance and his way down ringside to celebrate with fans. This crowd is electric for CM Punk per usual. He’s tonight’s special commentator.

GREAT: Malakai Black vs Dante Martin is the opening bout of the night. Black and Martin lock up to start the match and proceed to exchange reversals. Dante executes a flashy springboard dropkick to send Black rolling to the outside. He appears to attempt diving offense from inside to the outside but Black cuts him off by getting back in. Dante attempts another springboard move but Black catches him with a power-bomb. A single-leg crab follows for a short while before Dante escapes. After being beaten down for a while Dante Martin executes a reverse hurricanrana dumping Malakai on his head. Black escapes to the outside to regroup but Martin is quicker and springboards onto Black. The match goes back and forth before Dante Martin hits an avalanche hurricanrana. It appeared as though Martin was on the verge of a win but Malakai rolled his way into the half crab again. He begins selling his ribs and Dante tries to take advantage but is caught by a spinning heel kick for the finish. This was a very fun match to watch.

GOOD: After returning from the commercial Tony Schiavone is standing by with Jurassic Express. They begin to talk about the tag match from last week with The Elite but get interrupted by The Elite themselves! The Elite attack Jungle Boy and Luchasaurus with Adam Cole putting Jungle Boy in a camel clutch, and Kenny Omega and The Young Bucks putting Luchasaurus through a table.

GOOD: Up next is The Lucha Bros against Andrade’s mystery tag team for the AAA tag titles. Rey Fenix starts the match off with one of the mysterious masked men. They trade reversals before the man tries to take off Fenix’s mask. In return, The Lucha Bros rip off the mysterious men’s masks and its FTR. Dax Harwood continues to bring the fight to Fenix before tagging into Cash Wheeler. The momentum is all FTR’s. FTR takes turns beating on Fenix until Penta comes fighting them. Penta sends Fenix spring-boarding and diving into FTR. Fenix and Penta hold the ring before flying to the outside onto FTR. After multiple back and forth spots Tully Blanchard comes out to cause a distraction. This allows for Dax to hit Fenix with the AAA title mid moonsault, followed by a brainbuster for the win! FTR are the new AAA tag team championships.

GOOD: Tony Schiavone is backstage with Dante Martin and Lio Rush. He asks about the match earlier with Black. Lio says it’s only a growing pain. He’s here to bring Dante Martin to stardom and from now forward will be teaming with Martin.

GOOD: Tony Schiavone is now standing by with FTR and Andrade celebrating the title win. MJF comes by and it’s revealed Andrade paid him off to borrow FTR for the occasion.

BAD SQUASH: Up next is Wheeler Yuta against Jon Moxley. Moxley immediately out of the gate destroys Wheeler Yuta with a clothesline and cross face strikes. He proceeds to ground and pound Yuta and then hit a devastating paradigm shift! Wheeler Yuta looks legitimately hurt as Moxley casually leaves in victory.

GOOD: Tony Schiavone is backstage with Serena Deeb. He asks Deeb about her attitude change. Deeb says she had to come back and drag the division up to her level. She’s witnessed the women get comfortable. She’s then assaulted by Hikaru Shida to end the segment.

GOOD: Up next is The Super Clique against Dark Order. Cole and The Young Bucks immediately get things started by attacking Dark Order before the bell. The match is underway and Dark Order takes turns on Nick Jackson and Adam Cole. John Silver takes out Nick, Cole, and Cutler before running into a super-kick from Matt Jackson. Alex Reynolds tries to suicide dive onto The Elite on the outside but is caught by a kick from Adam Cole. Cole and The Bucks execute a super-kick/UshiGoroshi combo on Reynolds on the outside. Frequent tags by The Elite leave John Silver in a world of hurt for a while. The Young Bucks attempt a double brainbuster on Silver but are caught by a double suplex from Silver. Silver finally tags to Uno who shifts momentum slightly. Dark Order takes turns hitting moves on Adam Cole before The Young Bucks come to the save. Cole hits Panama sunrise, The Young Bucks hit the BTE trigger and then Cole hits the last shot all on Reynolds for the win!

GOOD: Without having any time to celebrate The Super Clique are rushed by Jungle Boy. He pulls out a chair and The Super Clique runs off leaving Brandon Cutler for dead. Jungle Boy hits Cutler with the chair and then hits the snare trap while cold spraying Cutler’s eyes.

GOOD: A video package airs of Cody Rhodes and Arn Anderson arriving at their wrestling school. Cody is greeted by the Nightmare family at the entrance. Arn is putting Cody through attack and react drills. After getting beat up Cody says he’s not learning anything. Arn then tells Cody a story of himself and Dusty as an example for Cody to know. They end with saying Malakai Black has it coming to him.

GOOD: MJF makes his way down to the ring. He claims he’s supposed to have a match with Darby Allin but Allin is a coward. He pretends to have no idea about Darby being attacked last week and continues to say Darby is unprofessional whether attacked or not. He requests for Wardlow to come out in which Wardlow comes with a referee. MJF requests the referee do a 10 count to rule the match forfeit. At the count of 9, the lights go out… Sting comes out with his bat and MJF pushes Wardlow into him. Sting and MJF stare at each other down to end the segment.

AVERAGE: Tony Schiavone is backstage with Anna Jay. Anna is interrupted by Britt Baker who brags about The Super Clique beating Anna’s friend’s Dark Order. Baker says that since Dark Order are literal losers so is Anna. A brawl breaks out to end the segment.

AVERAGE: Ruby Soho attacks Penelope Ford while celebrating the victory. Penelope is sent rolling to the outside where The Bunny is there to meet her to escape.

GOOD: Miro is shown questioning God. He wants to know if God is amused by Miro’s loss. Miro asks where is God to tell him why he has forsaken his champion. He tells God that he will either make him a champion again or his enemy. Everyone he comes across will feel pain until he becomes champion again.

MUST WATCH: Tony Schiavone is in the ring and introduces Hangman Adam Page. Schiavone asks Page his thoughts about having the chance to become champion. Page says he’s excited about Full Gear. He said in 2019 he and his friends left ROH to start AEW and he was on board with the vision, but it feels like the world has changed them. More specifically it changed him. He told the world he’d be the first AEW world champion but he lost to Jericho. Then he lost to PAC and it felt like he was just losing more and more. He lost his confidence, he lost his friends, and he lost himself. One thing he never lost though was the fans chanting “cowboy shit!” The fans erupt into the chant. Page says to him that is very real because cowboy shit was calling his shot and being confident in being the first world champion. Cowboy shit is winning the tag titles with Kenny Omega and defending them all over the world. Cowboy shit was having the balls to leave in the middle of his hottest run to be there for his newborn baby boy. Hangman says he’s not a fortune teller. He won’t predict how full gear will end, but the fans still believe and for the first time, so does he. So the promise he will make is to give everything he has at full gear. He will give his blood, he will give his sweat, he will give his tears. Most importantly he will give Cowboy shit!

GOOD: Up next is the main event. Bryan Danielson against Bobby Fish. Fish comes out of the gate strong targeting Bryan’s hurt spots from the Suzuki match. Bryan is quickly able to reverse his way out and work on the limbs of Fish. It appeared as though Danielson was going to do his diving knee from the apron to the outside but Fish clipped Bryan by the legs sending him crashing. He sends Bryan back inside and hits a dragon screw on Bryan’s leg to start the target on Danielson’s leg. Bryan eventually reverses a heel hook into an ankle lock and then turns the ankle lock into a leg tucked German suplex. Danielson is now hitting dragon screws on Bobby Fish and going after his legs. The two go back and forth for about 2 more minutes before Danielson executes a nasty heel hook for the submission victory.

This was a solid episode of Dynamite. They once again do the same thing that can be improved on which is the number of backstage interview segments they do, however, the ones on this episode were slightly better than other ones done before. Malakai Black and Dante Martin put on an amazing matchup. Hangman Page was brilliant on the mic. Lastly, Danielson and Fish was a solid closer after being in matches the night before. I don’t have many complaints about this episode, it was enjoyable for me.