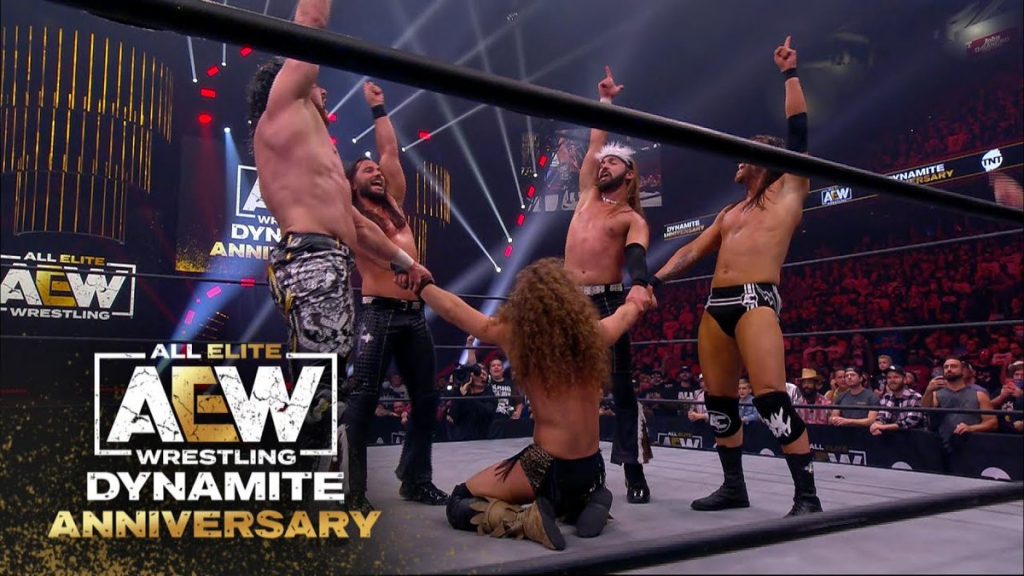 AnotherWednesday, another Dynamite. But this isn’t a just a regular Dynamite. It’s their annualAnniversary Show, as its been 2 yearssinceAEW Dynamite made its televiseddebut on TNT. Lined up for this week we have the newlycrownedAEW TNT Champion Sammy Guevara defending his championship against a debuting Bobby Fish, HikaruShida vs Serena Deeb, a Casino Ladder Match and much more.

MUST WATCH: Opening up the show we got 8 man tag team action as The Super Elite (Kenny Omega, The Young Bucks, and Adam Cole), took on the team of, The Jurassic Express, Impact World Heavyweight Champion Christian Cage, and Bryan Danielson. This was a very, very good match. Highlights include Christian taking an Indy Taker to the outside of the ring, practically everyone showing off their high flying ability to the outside, and A quadruple BTE Trigger to Jungle Boy to end the match. The only complaint I have with this match is that half way through the rules basically got thrown out the window, and people were just going in and out of the ring and fighting wherever they please.

GOOD: CM Punk came out next. He asked the crowd were they tired of watching him come out and talk rather than wrestle. The crowd cheers no and Punk says he will never get tires of the fans chanting for him. He then asks the crowd would they rather him buy everyone cheese steaks or wrestle. The crowd, obviously chose to watch him wrestle so Punk laid out the challenge. This Friday night, CM Punk will go one on one with Daniel Garcia on AEW Rampage.

GOOD: I honestly wish I could put “Well that just happened” and call it a day, but alas, I cannot. We got a shot of Arn Anderson standing by a fire pit outside someone’s house. When the home owner comes out to investigate, we find out it’s Cody Rhodes’ house. Cody comes out and Arn tells him to burn his suit. Cody tells Arn he gets what he’s trying to say, but the suit was very expensive and didn’t needed to be thrown away. Arn slaps Cody and tells him he thew the Nightmare Family away. Cody then burns the tie of his suit, to end the segment.

GREAT: Up next, Sammy Guevara defended his TNT Championship against former ROH and NXT Tag Team Champion, Bobby Fish. (Fish came out to Dance Away, and that entrance is perfect on its own but its not my job to rate entrances.) Bobby Fish took control early on, before Sammy Guevara eventually got the upperhand, going to the top rope, however Fish stopped him, and hit a falcon arrow from the top, almost winning the match. Sammy however kicked out, got back in control, hit the GTH and won the match, retaining his title.

GOOD: After the match, American Top Team came out to attack Sammy Guevara and they were led by none other than former UFC Heavyweight Champion, Junior Dos Santos. Chris Jericho and Jake Hager came out and drove American Top Team up the ramp and Dan Lambert challenged them to a match. Ethan Page, Scorpio Sky, and Junior Dos Santos vs Jericho, Hager, and Guevara, next week. Jericho accepted the challenge and the match is set.

GOOD: It was then time for a sit down interview with Jim Ross, and his guest Darby Allin. Ross brought up what happened last week with MJF and Darby said he refuses to let MJF win over him whether it be mentally or physically.

AVERAGE: Darby Allin then had a match with Nick Comoroto. This was the lowest point of the show. While not bad, it certainly didn’t meet the standards the beginning of the show set. The short bout ended after Darby hit a stunner, then a Coffin Drop to Comoroto to end the match.

GOOD: Backstage, Darby is getting ready to head out for the night. However, a limo pulls up, and he’s ambushed by 5 masked men. We aren’t shown who these men are but its pretty obvious, its MJF and The Pinnacle. The masked men leave Darby laid out as they drive off in their limo.

GREAT: Tony Schiavone and Aubry Edwards are in the ring now as we cut back to the arena. Tony announces that in January, AEW Dynamite will be moving over to TBS, while AEW Rampage will stay on TNT. With this announcement, Tony announces there will also be a TBS championship, exclusive to the women’s division. This is great news as hopefully, this gets more of the women division on TV.

MUST WATCH: Women’s action is up next as Hikaru Shida is looking to pick up her 50th AEW win and being the first woman to do so. Shida’s opponent for tonight was Serena Deeb. This was the best Dynamite Women’s match in a while. We had falcon arrows, crossbodies, kicks, and punches flying everywhere. The match ended though, after Deeb locked in the Serenity Lock, making Shida tap out.

MUST WATCH: In the main event, we had a Casino Ladder Match to determine the next challenger for Kenny Omega’s AEW World Heavyweight Championship. The match inlcuded Orange Cassidy, Pac, Andrade El Idolo, Matt Hardy, Lance Archer, Joooooooooon Moxley, and the mystery Joker participant. Cassidy and Pac started off, with the other men coming in the order I listed them. This match was off the chart crazy. There were ladders, there were tables, there were chairs, it was madness. Some of my favorite moments were Matt Hardy putting Orange Cassidy through a table and Pac throwing Andrade off the top rope, causing the former NXT Champion to bounce off a ladder on the outside. But my overall absolute favorite moment of the match, was the entrance of the last competitor in the match. The clock counted down… 5… Everyone stood up 4… The crowd is counting along 3… Who is it? 2… Here it comes! 1… That’s when it happened. The crowd went crazy as that familiar Western tune begin to play. Then, HANGMAN ADAM PAGE RETURNED. Page, who hasn’t been since AEW’s Homecoming show in August returned to Dynamite and it was time for some Cowboy… Stuff. Hangman started off strong. Hitting people left and right, even climbing up a ladder to hit a Rite of Passage on Pac, sending him soaring through a table. Towards the end, everyone was laid out and Jooooooon Moxley was able to take advantage and climbed up the ladder to attempt to win the match. Though Adam Page got up. He climbed up the ladder, hit Moxley off, and grabbed the giant poker chip to win the match and the right to face Kenny Omega for the AEW Championship.

What. A. Show! Almost everything on this show was must watch. Obviously, it wasn’t 100% perfect but it was dang near close enough. A return, a debut, and 3 really really really really good matches. I would argue this has been AEW‘s best Dynamite since Fight for the Fallen back in July. Anyways, I’m very interested to see what happens next week, as AEW is on a roll and I don’t see them slowing down anytime soon.