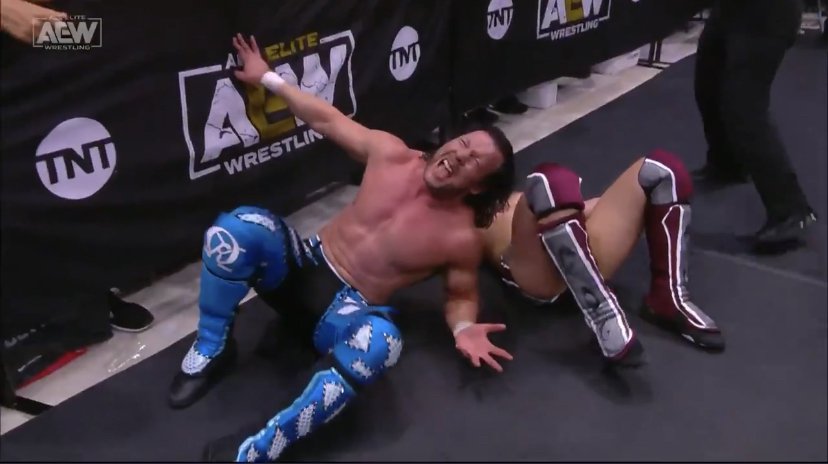 It’s Wednesday and you know what that means! It’s AEW Dynamite: Grand Slam live from Arthur Ashe Stadium in Queens, NY. What more is there to say? This show has been hyped almost equivalent to All Out. It’s an episode of Dynamite but it’s been treated like a PPV. The card is stacked from top to bottom tonight with matches such as MJF vs Brian Pillman Jr, Malakai Black vs Cody Rhodes, Ruby Soho vs Dr. Britt Baker, and the main event… Kenny Omega vs Bryan Danielson. AEW could very well be hitting its “Grand Slam” tonight. I’m ready, are you?

MUST WATCH: Surprisingly, the show kicks off with Kenny Omega against Bryan Danielson. The crowd is electric! Omega and Danielson lock up before Omega gives Danielson a chop heard throughout the stadium. They lock up again before Danielson kicks Omega in the chest. The match begins to pick up in pace as Omega and Danielson trade reversals. Bryan gets Omega in the corner for combinations of chops and kicks. Omega rolls to the outside and Danielson wastes no time with a suicide dive. Danielson begins targeting the arm of Omega to eventually set up the LeBell Lock. Kenny finally shifts momentum chopping and kicking Danielson. With every chop, Danielson is getting fired up before laying a few in of his own. After a slow pace Omega goes for his “You Can’t Escape” maneuver. He’s caught with knees to the ribs from the moonsault. Bryan Danielson now has the momentum, laying in kicks and then hitting a hurricanrana. Omega sends Bryan out the ring with a hurricanrana of his own, followed by the Rise of The Terminator. Kenny gets Bryan into the ring and they trade roll-ups before Bryan executes Cattle Mutilation. Omega gets his foot on the rope and rolls outside where Danielson meets him with a flying knee from the top rope. As Danielson tries to further the momentum, Omega catches him with a dragon suplex on the ramp. Bryan is stunned. Omega creates space by going to the entrance part of the ramp and then running to hit a devastating V trigger. When Bryan finally makes his way into the ring, Omega is there to deadlift Bryan into a powerbomb position. He executes a buckle bomb that sends Bryan over the ropes back to the ramp. Omega goes to the top rope and executes a missile dropkick to the back of Bryan’s head. He follows it with a heel kick to the back of the head and a V trigger. Kenny tries to hit an avalanche dragon suplex but Bryan can counter to an avalanche backdrop. After a little back and forth Omega finally hits the avalanche dragon suplex from the top. Near fall! Omega hits V trigger again and then sets up for One-Winged Angel but Bryan dumps Omega on his head with a reverse hurricanrana. Bryan tries to hit his running knee but is caught with a powerbomb and eats another V trigger for another near fall. The two continue to go back and forth but nothing is working for the two. This matchup is ended in a time-limit draw. Holy cow what a match!

GOOD: After the bell is called Omega and Danielson continues to fight. Bryan gets Omega in the LeBell lock but The Elite comes out to break him off. After everything seems to calm down The Elite attack Bryan Danielson. Christian Cage and Jurassic Express come out to fend off The Elite and stand tall!

MUST WATCH: Up next is CM Punk to address the live crowd. The crowd is electric for him as well, as usual. He begins by saying he’s glad he isn’t wrestling tonight because there’s no following Danielson and Omega. Punk then says it’s been a while since he’s been in NYC, and it’s been a while since professional wrestling has been in NYC. He proceeds to say people have been telling him he should be mad, he should be the old CM Punk. Punk says we will see it one day, but be careful what is wished for. He then proceeds to get into Team Tazz. Punk says he’s going to put an end to Team Tazz because of what they did to him. They tried to take this comeback from him after such a long time, but no one will be able to take this from him. He says Team Tazz should have finished the job because this Friday Will Hobbs goes to sleep! What a fantastic promo from Punk.

AVERAGE: Up next is MJF against Brian Pillman Jr! To start, MJF attempts a handshake. Pillman instantly takes him down with ground and pound. The two proceed to trade strikes, maneuvers, and reversals. Neither man can mount momentum for a long period as this match is truly back and forth. MJF finally can hold onto the momentum targeting the limbs of Pillman Jr! After a very long time of being destroyed, Pillman hits a high crossbody to take over momentum. MJF rolls out the ring and as Pillman is about to dive through the ropes, MJF puts Julia Hart in front of him. Pillman doesn’t proceed with the move, instead, he goes to the outside but is met with a clothesline. MJF finishes Pillman Jr. with the Salt of the Earth submission!

AVERAGE: Alex Marvez is backstage with Chris Jericho and Jake Hager. Marvez asks Jericho and Hager about Men of the Year challenging them. Jericho and Hager say it was a mistake for Ethan Page and Scorpio Sky to challenge them because at Rampage Grand Slam they are going to get beat down.

AVERAGE: Up next is Malakai Black against Cody Rhodes. The two men start back and forth trading strikes and counters. Black hits his signature springboard moonsault into his sit-down taunt. He’s met by Brandy Rhodes sitting down right in front of him, followed by Brandy flipping Black the bird. This distraction allows Cody to enter from behind and attempt offense on Black, but Black has him scouted. The fight spills onto the ramp where Cody attempts to fly from the top but is met with a knee in mid-air. Momentum is all Malakai Black’s. After reversing Black’s submission into a roll-up, Cody is met with the Black Mass spinning heel kick. Cody falls to the outside so that Black can’t pin. When Cody gets back inside Black pins but Cody gets his foot on the rope. The two go back and forth before Cody can hit Cross Rhodes. Near fall! Arn Anderson tries to get onto the apron but Black sends Cody into Arn and then rolls out the ring. Cody proceeds to check on Arn, before redirecting to Black. He gets Black inside where Black spits mist at him. This allows Black to roll Cody up for the win.

AVERAGE: A video package for Miro against Sammy Guevara airs. Sammy says he’s going to beat Miro for the TNT title and then buy Fuego Del Sol a new car. The match is next week on Dynamite!

GOOD: Up next it’s FTR against Sting and Darby Allin. Darby Allin and Dax Harwood begin the match. Allin gets shoved into FTR’s corner by Dax but he’s able to get free as Dax tags Cash. Darby quickly tags Sting in. Sting is jumped for a little bit before taking out both members of FTR. The momentum doesn’t last for long as FTR continues to beat on Sting. Sting tags Darby Allin back in and now it’s Darby facing the numbers game of FTR. After a while, Darby tags Sting back in. Sting quickly brings the fight to FTR. After controlling the momentum, Sting places both members of FTR in opposite corners for Stinger Splashes. He hits the splash on Cash while Dax sets up a chair in the corner. Sting stop’s himself in his tracks and runs Dax headfirst into the chair. He puts Dax in the death lock while Allin hits coffin drop on Cash on the apron. Sting and Darby are victorious as Dax taps out.

GREAT: Up next is the main event of the evening. Ruby Soho against Dr. Britt Baker, D.M.D. for the AEW Women’s Championship. The two ladies lock up to begin the match. Ruby controls Britt with arm, waist, and headlocks. Britt ends up going to the outside where Ruby tries to dive on her but ends up diving on Jamie Hayter and Rebel. Britt takes advantage of being unscathed by hitting a twisting neck breaker to Ruby from the apron to the floor. The momentum is all Britt Baker’s as they get back in the ring. After a long time in control, Britt Baker’s face is ran into the middle turnbuckle by Ruby Soho. Ruby gets Britt grounded but runs into a superkick. When they make it back to their feet they go back and forth with strikes and counters. Britt attempted the curb stomp to set up for lockjaw, but Ruby had her scouted. Ruby eventually hits a senton from the top for a near fall. Britt then hits another neck breaker followed by a superkick for a near fall. After some back and forth Britt hits the curb stomp. Near fall! Ruby then hits her signature kick on Britt and Reba before being caught up by Jamie Hayter. The attack allows Britt Baker to hit lockjaw for the win!

The biggest mistake with this show was putting the best match first. Bryan Danielson and Kenny Omega put on an absolute classic! There was no way anything could follow that. CM Punk was fantastic on the mic tonight. The main event of Ruby Soho vs Britt Baker was great. Everything else in between was enjoyable, but not to the fullest extent as Danielson and Omega flat out stole the show. Perhaps the matches such as MJF and Pillman, or FTR vs Sting and Darby could have been enjoyed more had Kenny vs Bryan been saved for last. Nonetheless, this was a very decent show!