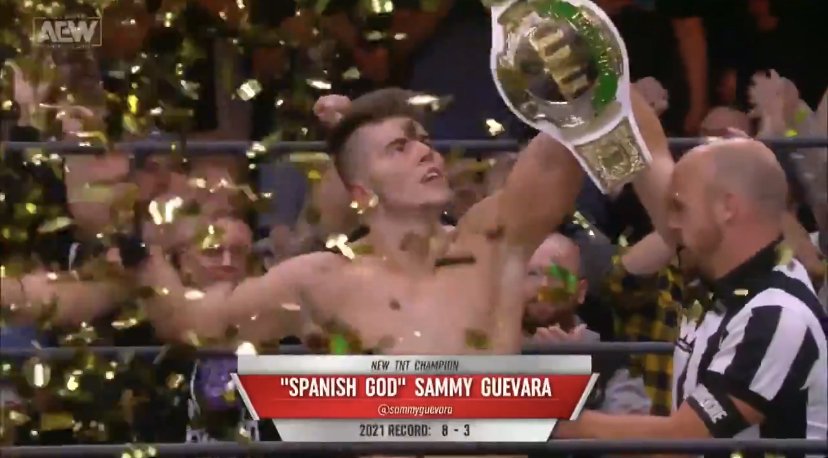 It’s the fallout of Grand Slam week live tonight on Dynamite. Last week we witnessed arguably the best match of the year, but if not, it was one of. Bryan Danielson and Kenny Omega absolutely performed a classic, so much so that nothing was able to successfully follow it. How does AEW rebound off this tonight? We will see Adam Cole taking on Jungle Boy, Miro defending the TNT Championship against Sammy Guevara, and much more. It’s AEW Dynamite live from the home of the late Brodie Lee. I’m ready, are you?

GREAT: The show kicks off with CM Punk’s entrance music! He makes his entrance to the tune of a HUGE pop, plus the crowd singing his song to him. Punk goes to ringside to celebrate with fans before going to the announce table as tonight’s special commentator.

MUST WATCH: The opening bout is Adam Cole against Jungle Boy. Cole and Jungle Boy lock up to begin the match. After exchanging a bunch of counters and locks Jungle Boy hits a springboard arm drag that sends Cole to the outside. They come back inside where Adam Cole retakes momentum and slows the pace down. Jungle Boy finally executes strikes and combos before a lariat that flips Cole inside out to regain momentum. Cole and Jungle Boy exchange various strikes from punches to pump kicks before Cole dumps Jungle Boy with a brainbuster. Cole attempts to follow with running offense but Jungle Boy hits a belly-to-belly sending Cole into the corner. After regrouping Cole executes a backstabber followed by his signature UshiGoroshi for a near fall! Jungle Boy regroups by hitting a reverse hurricanrana on Cole, dumping him on his head. Jungle Boy runs the ropes and then runs his forearm into the back of Cole’s head, Last Shot style for a near fall. Jungle Boy hits the ropes again only to be met with a superkick. He evades Cole’s next attack and instead hits a hurricanrana on Cole from the apron to the outside. Cole gets back inside where Jungle Boy rushes to meet him but is met with another superkick. He quickly hits Panama Sunrise for a NEAR FALL?! Cole is shocked! This is awesome chant rules the arena. Cole then goes for the Last Shot but Jungle Boy counters. After back and forth action Cole and Jungle Boy stop in their tracks due to almost hitting the referee. This distraction allowed for Adam Cole to low blow Jungle Boy and hit Last Shot for the win. What an amazing match!

GREAT: After the matchup, The Elite comes out to address the AEW crowd. Karl Anderson says to be elite they must have Adam Cole, Kenny Omega, and The Young Bucks. He hands the mic to Adam Cole where Cole says he told the world he’ll beat Jungle Boy and did. He’s undefeated and he’s elite! Kenny Omega is next on the mic where he says his social media mentions have been going crazy. Everyone has been telling him that may have been the best match they’ve ever seen. Omega said while the match was great and while Danielson did kick his head in, he couldn’t get the job done. Kenny says that’s why Bryan won’t get another match. Out come’s Bryan Danielson to a huge pop. Bryan asks the crowd if they want to see a rematch before proceeding to say Kenny has no balls for backing down. Danielson says that since Kenny has no balls and won’t fight him again, he’s challenging anyone from The Elite to a match on Rampage. Kenny then says they don’t have to wait till Rampage. It can go down right now. Bryan says it could go down right now and brings out Christian, Kazarian, Luchasaurus, and Jungle Boy to run The Elite out of the ring.

GOOD: Tony Schiavone is backstage with The Lucha Bros. They can’t get a word in because Andrade El Idolo cuts them off. He teases them by asking where is Pac? Andrade then proceeds to say he has some luchador friends that can take the titles from The Lucha Bros. Penta and Fenix say they have cero mierdo!

GOOD: Up next is Dante Martin and Matt Sydal against Cody Rhodes and Lee Johnson. Cody and Dante kick off the match with a lock-up. Cody immediately imposes his will over Martin with a takedown before tagging Lee Johnson. Sydal is also briefly tagged in but the back is Dante Martin. Johnson and Martin execute some beautiful athletic counters and maneuvers before the two teams begin to slug it out. Cody sends Sydal outside and attempts to dive onto him but misses. Sydal successfully dives on Cody. Lee Johnson then dives onto Sydal before Dante Martin springboards to the outside onto Johnson and Cody. Johnson is sent back into the ring and is grounded by Martin and Sydal. Lee Johnson tags Cody Rhodes in where he begins to bring the fight to Martin and Sydal. Cody sends Sydal to the outside with a disaster kick and then executes a vertebreaker on Dante Martin. Near fall! After more back and forth Lee Johnson tagged himself in. Johnson executes a fisherman-like move where he dropped Martins head on his knee for the win.

GREAT: After the match, Cody Rhodes calls out Malakai Black. He’s immediately stopped by Arn Anderson. Arn says ever since Black has come around he’s sabotaged his life. Ask Brock Anderson. Ask Lee Johnson. He says this fight is Cody’s and Cody appears to had gotten soft. He took his boots off after his loss to Black the first time. Then he worried about Arn and took another L. He says he refuses to coach a loser before walking off with Lee Johnson.

AVERAGE: Up next is Jon Moxley, Eddie Kingston, and Darby Allin against Bear Country and Anthony Green. The match immediately kicks off with a brawl as no time was wasted. This match was very fast, dare I say a squash match. Moxley, Kingston, and Allin are victorious.

AVERAGE: Up next is Orange Cassidy and Dark Order against Hardy Family Office. Dark Order is accompanied by -1 in a tribute for Brodie Lee. Immediately the Dark Order shows their troubles with lack of agreement on who starts. They’re attacked by The Butcher and The Blade and it’s Alan ‘5’ Angels who are the legal man. Orange Cassidy is eventually tagged in before an absolute brawl erupts between Dark Order and HFO. After multiple tag-ins Jack Evans and Angelico send Reynolds into his Dark Order brethren. When it appears as though Uno was going to walk away, Amanda Huber, -1, Tay Conti, and Anna Jay come out to put sense in Uno. The Dark Order gets on the same page and takes out the HFO.

GOOD: After the match, The Dark Order members shake hands and then hug Amanda Huber, Conti, and Anna Jay. They lift -1 into the air in celebration of the life of Brodie Lee.

GOOD: A Lio Rush video package airs in which he states Khan asked him to be All Elite. Lio states that he is the captain of ‘this ship.’ Rush explains that he makes his different wrestling companies money and then uses his profits to pay off everything to make sure he and his people are good. It appears as though Lio Rush is All Elite!

GOOD: FTR and Tully Blanchard appear on the screen in which Dax Harwood states FTR are revitalized. That means good news for them and The Pinnacle, but bad news for the rest of the locker room.

AVERAGE: Dan Lambert is in the ring doing his usual rant. After he’s done, Scorpio Sky gets on the mic and states his AEW accomplishments so far. He says the only one that acknowledged his greatness was Dan Lambert. Ethan Page echoes the sentiments of Scorpio before saying the Men of the Year are THE top team in AEW.

GOOD: A video package of Hikaru Shida airs. She’s focused on continuing her success in AEW by securing her 50th win. It’ll have to come at the expense of Serena Deeb as that’s her opponent next week. Serena says she will not be the one Shida goes to through for her 50th win. Hikaru Shida says she’s excited to face one of the best technical wrestlers in Serena Deeb next week.

AVERAGE: Up next is Penelope Ford and The Bunny against Tay Conti and Anna Jay. Both teams go back and forth in a fairly decent matchup until Anna Jay submits Penelope Ford with her rear-naked choke. -1 celebrates the victory with them.

MUST WATCH: MJF is up next to address the AEW crowd. MJF says he wants this company to be successful but he needs to be given what he deserves. He’ll get into that in a bit, but first, he says this company has men and women to allow for the company to thrive in the future. He says there are four pillars of AEW. Darby Allin, Jungle Boy, Sammy Guevara, and himself. MJF states he’s beaten all three of them therefore what he deserves is the AEW Championship. MJF threatens that he can call up Bruce Prichard if he’s not taken seriously. Darby Allin comes out to interrupt MJF. He says how can MJF call himself the strongest pillar when Allin is the only one to have won a championship between the two. MJF jabs back at Allin by bringing up the car crash he and his uncle got in when Allin was younger. The wrong man died says MJF. Darby Allin says MJF isn’t going to break him mentally. This causes MJF to exit the ring.

MUST WATCH: Up next is the main event, Miro against Sammy Guevara for the TNT Championship. Sammy Guevara tries to hit his running knee strike to open the match but Miro swatted him down with a clothesline. Miro proceeds to target Guevara’s ankles and back. Guevara fights out slightly but Miro imposes his will. He uses Sammy’s chain to wrap around his face and neck. Guevara is able to create separation on the outside. He gets Miro back in the ring and attempts a shooting star while Miro is standing, only to be caught. This could have been nasty as even Miro fell when trying to catch Sammy. Nonetheless, Guevara is caught in mid-air and is sent flying with a belly to belly. The momentum is all Miro’s from here on. After a LONG time on the defense, Guevara catches Miro with a standing Spanish fly. Guevara begins to fight back with various maneuvers before once again being caught by Miro. Miro attempts his signature kick but Sammy moves out the way. Miro runs into the corner off the reversal and Guevara runs his knee into Miro. Guevara catches Miro with a cutter but it’s a near fall! Miro then executes his kick on Sammy but Sammy rolls out the ring. Miro goes crazy by breaking off the turnbuckle pads. Fuego Del Sol comes to distract Miro, allowing Sammy to run Miro into the exposed turnbuckle. Guevara hits GTH followed by the 630 to become the new TNT champion! What a match!

This episode was on par with last week. There weren’t major improvements or downgrades. In fact, there were two 4+ Star matches here as Adam Cole and Jungle Boy put on a classic, as well as Sammy Guevara and Miro. MJF was golden on the mic as per usual. The moment of Sammy Guevara winning the TNT Championship was amazing to see! I still feel as though they can do with fewer interview segments, and pay more attention to giving their all to matches. Other than that, this was a very solid episode of Dynamite!