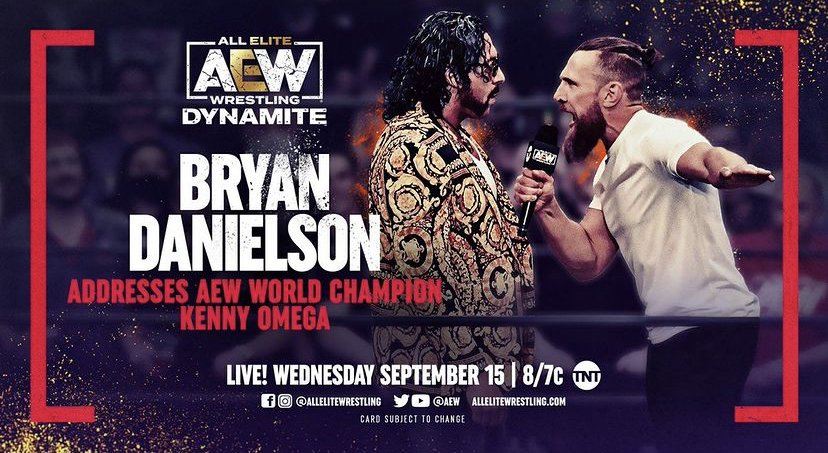 Following a very lackluster episode of Dynamite last week on the heels of All Out, how will AEW rebound this week? We got a glimpse on Rampage where the action was better than it was on Dynamite. Tonight Adam Cole makes his in-ring debut against Frankie Kazarian. Bryan Danielson addresses Kenny Omega. CM Punk takes to the commentary table for a matchup and more! Who’s ready for Dynamite? I know I am.

GREAT: The show kicks off with the entrance music of CM Punk. CM Punk makes his entrance to the ringside to celebrate with fans before making his way back to the announce table, as he is tonight’s special guest commentator.

GREAT: The opening bout is Adam Cole against Frankie Kazarian. What a pop for Adam Cole! Cole and Kazarian exchange counters to begin the match. The fight spills to the outside where Cole runs Kazarian’s kidneys into the edge of the ring. Adam Cole enters the ring again only to be caught by Kazarian with a draping leg drop of sorts. The two once again trade maneuvers and momentum before Cole scored a near fall from an UshiGoroshi. After more back and forth action Kazarian runs right into a superkick from Adam Cole, bay-bay. Cole attempts to follow the superkick with a Panama Sunrise, but Kazarian hits an Alabama Slam. Kazarian then hits a springboard leg-drop for a near fall. The two begin to slug it out with punches and kicks before Cole can hit another variation of UshiGoroshi. Near fall once again! The crowd erupts into a “this is awesome” chant before Cole finishes Kazarian with a Panama Sunrise, followed by the last shot. What an amazing matchup!

GOOD: Following the victory, Adam Cole picks up a microphone for storytime with Adam Cole. Cole says that hope is a dangerous thing and the locker room hopes they can keep up with The Elite. He says it’s never going to happen, before beginning to get into three superstars that annoy him. Christian Cage, Luchasaurus, and Jungle Boy. Cole then proceeds to challenge those three to a match against himself and The Young Bucks at Rampage Grand Slam.

AVERAGE: Tony Schiavone is backstage with Fuego Del Sol and Sammy Guevara. Fuego says he’d trade his new car in for the TNT championship. In fact, that’s exactly what he will do this Friday on Rampage. Fuego challenges Miro!

MUST WATCH: Up next MJF comes out to address the audience. MJF says last week the crowd was sympathetic for Brian Pillman but they should be sympathetic for him because he’s standing in the armpit of America. (New Jersey) MJF then proceeds to say he’s aware that his words last week were offensive. He doesn’t care! MJF begins to say he wants a conversation with the late great Loose Cannon Brian Pillman Sr. He looks up to the sky before saying who am I kidding and redirecting to the ground. MJF rants about Pillman Jr. and his mom. Brian Pillman Jr. interrupts MJF from going further and MJF sends Wardlow to meet him at the stage. Pillman was a step ahead as he came in the ring from the crowd with a chair. Pillman Jr. fends off Wardlow and MJF to stand tall.

GOOD: A pre-recorded interview with Jim Ross and Brian Pillman Jr. airs. JR recalls Pillman Sr. calling his phone to tell him he was having a son. He says Pillman has come a long way and he needs to hand MJF his ass. Brian Pillman Jr. vows to give MJF a taste of his medicine at Dynamite Grand Slam.

AVERAGE: Alex Marvez is backstage with Christian and Jurassic Express. Christian begins to talk trash about Adam Cole before accepting his challenge from earlier for Rampage Grand Slam.

GOOD: Up next is Matt Sydal and Dante Martin against FTR. Sydal and Dax Harwood begin the match. Matt Sydal tries to get multiple roll-ups on Dax before tagging out to Dante Martin. Dax beats on Martin before tagging Cash Wheeler. Wheeler does a good job keeping Dante Martin grounded. FTR attempts tag team offense but is unsuccessful. Dante is able to tag Matt Sydal and the two hit tag team diving offense to the outside. When the fight gets back inside FTR re-gains momentum. While the referee is distracted Tully Blanchard gets involved. FTR tag in and out assaulting Matt Sydal. As Sydal bounces off the ropes Dante Martin sneaks a tag in. Martin takes over momentum by executing athletic offense. FTR successfully slow Martin down before finishing it off with Big Rig.

AVERAGE: Up next Malakai Black takes to the ring for a promo. Black says there’s an enemy in the house of black before showing the judge of the “Go Big Show” wearing a nightmare family hoodie. Before Malakai can target the woman, Cody Rhodes comes down the stairs through the audience. The lady jumps on Black’s back as a distraction to give Cody time to get to the ringside. Cody and Black begin brawling all around ringside, into the audience.

SATISFACTORY: A video package airs to hype Anna Jay against The Bunny, where The Bunny challenged Anna Jay to a match on Rampage this week.

GOOD: Alex Marvez is backstage with Anna Jay and The Dark Order. The interview is supposed to be for Anna Jay and her match with The Bunny, but Dark Order makes it about them with their arguments. Anna Jay says if they aren’t going to get it together, she doesn’t want them out there for her match on Rampage.

AVERAGE: Up next Dan Lambert is in the ring with Scorpio  Sky, Ethan Page, and a bunch of UFC fighters. He begins to get into his usual rant before Chris Jericho cuts him off. The fans serenade Jericho with the lyrics to Judas as usual. Jericho gets into the fact that they can’t be intimidated by Lambert and his crew. He gets into backstage scuffles he’s gotten into in the past with MMA fighters. (Alluding to Brock Lesnar) Jericho challenges Ethan Page and Scorpio Sky to a match against him and Hager. Lambert denies fighting tonight but says the match can happen next week. Jericho says they will beat the crap out of Page and Sky next week.

AVERAGE: Up next is Jade Cargill against Leyla Hirsch. Jade appears to be having her way with Leyla, bringing the fight to the outside and then back inside. Every time Leyla Hirsch tries to fight back, Jade just imposes her will. After an extended amount of time getting beat up Leyla is able to fight out. She executes a German suplex sending Jade outside, before diving into her. Leyla sends Jade back in the ring before Jade hits a big boot, and then jaded for the win.

GOOD: A video package airs of Andrade discussing his match with PAC. He asks his assistant why did he interfere in his match? His assistant replied that Chavo said to. Andrade says Chavo is not the boss. Andrade is the kingpin and can beat anyone whenever he wants.

GOOD: The commentary team is shown, before Tazz and Hook approach CM Punk. What Tazz says is inaudible, but we hear CM Punk say “I’m not taking your job.” Punk takes off the headset and walks up to Tazz and Hook. From behind, Will Hobbs attacks Punk. Hook and Will assault Punk and then Hobbs slams Punk on the announce table before walking away.

AVERAGE: A video package is played of Shawn Spears ahead of the Darby Allin matchup up next. Spears tells Darby “the chairman is coming.”

GOOD: Up next is Darby Allin against Shawn Spears. As Darby is sitting in the corner apart of his entrance Spears runs right into him with a knee. Spears brings the fight outside where he runs Darby into the steps. Shawn Spears begins to press Darby Allin’s head against the steps before kneeing his head in. He rolls down his knee pad to attempt an unprotected knee, but Darby moves, and Spears knee is run into the steel. After regaining momentum, Spears pours water on a rag and wipes Darby’s face paint off. Spears keeps the momentum with a scorpion deathlock right in front of Sting. Darby fights out and then hits code red for a near fall. Spears and Darby go back and forth before Allin sends Spears onto the stairs outside. Allin proceeds to suicide dive into Spears tumbling off the stairs. Darby gets Spears into the ring for a coffin drop. Allin picks up the win.

GOOD: Bryan Danielson is seen in a video package talking about Kenny Omega. He says he isn’t coming for the entire Elite. He only wants Kenny Omega.

MUST WATCH: Tony Schiavone is in the ring to introduce The American Dragon Bryan Danielson. Schiavone says he’s heard what Bryan has said about Omega and the fans would love for Bryan and Omega to get in the ring. Before Bryan can say anything Don Callis interrupts. Callis talks about hearing the same thing every week from Bryan Danielson. He says sarcastically that the decision must have been really hard to sign with the best wrestling company in the world. Callis implies Danielson to be a “carny piece of shit,” before saying he’s just a mark instead. Bryan dismisses Callis before getting in Kenny’s face to continue to challenge him. Bryan says he came to AEW to fight the best bout machine, the God of professional wrestling. Since he’s been there he hasn’t seen that version of Kenny. He’s seen someone who just runs around with goofy stooges. Danielson says he’s heard the rumors that Kenny lost his step, or his confidence but that isn’t true. Kenny simply has lost his balls. Kenny proceeds to accept the challenge.

GOOD: Miro is seen backstage talking about Fuego Del Sol. He says he doesn’t know why Fuego continues to challenge him, but if that’s what he wants, he’s going to crush Fuego and his stupid car. Miro accepts Fuego’s challenge.

AVERAGE: A Matt Hardy video package is aired where he talks about what Orange Cassidy has been doing to him. Hardy vows to make Cassidy pay real soon!

AVERAGE: Up next is Jon Moxley and Eddie Kingston against 2.0. During Moxley and Kingston’s entrance 2.0 and Daniel Garcia attack Eddie and Moxley. The bell rings and the match begins with Jeff Parker and Jon Moxley. Parker can’t get anything going over Moxley, before he and Lee both assault Moxley on the outside.  The fight goes back inside where 2.0 tags in and out bringing the fight to Moxley. Mox tries to fight back but he’s momentarily unsuccessful. Moxley finally shits momentum a bit to tag in Eddie Kingston. The two hit a lariat/suplex combo for the win over 2.0.

GREAT: After the match, Minoru Suzuki interrupts the post-match celebration. As Suzuki makes his way to the ring, Lance Archer comes from through the crowd to isolate Eddie Kingston. Moxley and Suzuki brawl as well. Suzuki attempted his gotch-style pile driver through a ringside table where Moxley jams a microphone to Suzuki’s cut eye. The show ends with the brawl ensuing around the arena.

This episode of Dynamite was better than last week’s. There were still some questionable things that occurred such as the execution of the Malakai Black & Cody brawl, or the awkward delivery of the Dan Lambert & Chris Jericho segment, but it certainly improved from last week. Adam Cole and Kazarian had a great match, MJF was gold as per usual, and Omega vs Bryan Danielson should be a banger. The segment between the two from tonight was AMAZING. I look forward to AEW Dynamite: Grand Slam. It should be a great show!