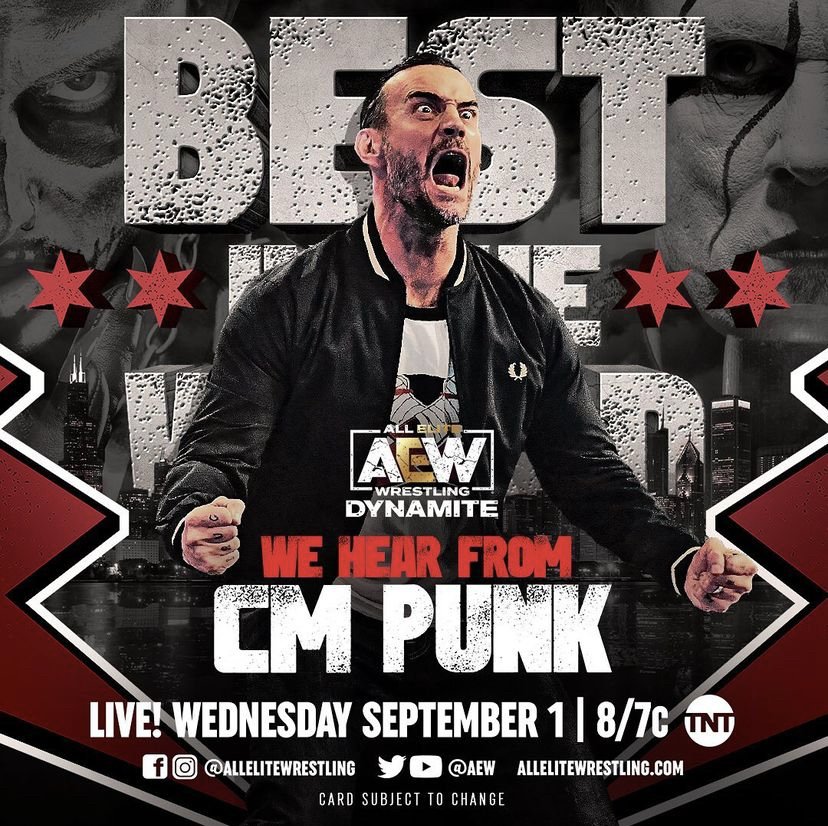 It’s Wednesday and you know what that means! The All Out go-home show is here live from Chicago. It’s also the 100th episode celebration for Dynamite. The Elite square off against Jurassic Express & The Lucha Bros. Chris Jericho has a word with Jim Ross. FTR returns to the ring to settle the bad blood with Santana and Ortiz. Lastly, CM Punk will be live on Dynamite for a final word before his return to in-ring action against Darby Allin at All Out. What will the final Dynamite stop before All Out hold for AEW? We’ll find out live tonight!

MUST WATCH: The show begins with FTR against Santana and Ortiz. As the bell rings the fans give a loud ovation for both teams. Santana and Dax exchange back and forth offense. Both teams erupt into a brawl before Ortiz and Santana send FTR outside to execute a high-flying offense. Momentum is all for Santana and Ortiz as Santana tags Ortiz into the match. Cash Wheeler is tagged in to shift the momentum back to FTR. Dax is tagged back in to inflict more damage on Ortiz and his arm. It appears as though Dax is trying to inflict the same injury Cash suffered onto Ortiz. Ortiz is able to tag into Santana. Santana singlehandedly swings momentum back into his favor. 3 Amigos and a Frog Splash! Santana gets a near fall. Ortiz is tagged back in as the fight begins to pick up the pace. Dax hits a brain-buster on Ortiz for a near fall! Ortiz and Santana execute innovative offense on Cash Wheeler but it only gets a near fall. Wheeler executes the Gory Special on Ortiz for another near fall. The match proceeds to go back and forth before FTR hits Big Rig. Santana jumps off the rope to break the pin. Santana and Ortiz hit back-to-back combination offense and then a double-team move for the win! This was an amazing show opener! Both teams put on an absolute classic in which the fans erupted into a “this is awesome” chant.

GOOD: Daniel Garcia is backstage with 2.0. They talk about how they will be the cause of robbing the fans of CM Punk vs Darby Allin because at Rampage Garcia will beat Allin so bad he won’t make it to All Out.

MUST WATCH: Up next, CM Punk makes his entrance to his hometown fans. The ovation for the hometown hero, the Second City Saint, is MASSIVE! CM Punk says he can spend weeks/months just coming out to Cult of Personality and feeling the love! Punk knows that on Sunday the euphoria could all end for him. He hasn’t wrestled in 7 years and he’s nervous! The fans erupt into a “you still got it” chant! Punk was about to promise the fans that every time he comes out he will give everything he has. He couldn’t finish his sentence because Daniel Garcia and 2.0 began ambushing him. After a lengthy assault, Darby Allin and Sting come out to even the odds. Coffin Drop, Scorpion DeathDrop, and GTS all at the same time! Punk and Darby Allin have a face-off before Sting grabs the mic. Sting says he must admit, he’s always wanted to share the ring with CM Punk. A couple of years ago he and Punk weren’t able to cross path’s but here they are. Sting says it felt good to clear traffic from trying to sabotage the Punk/Allin match, but part of the traffic cleared is him! He states he will leave the floor to Punk and Allin at All Out. Allin and Punk stare down to end this segment. Wow! Everything about this was awesome! It played its part to up the anticipation for All Out!

GREAT: Up next is a pre-recorded interview with Tony Schiavone and MJF. MJF lists all of Jericho’s nicknames before giving Jericho’s career credit. Jericho shouldn’t be gassed up though because by the time MJF’s career is said and done, he will be greater. MJF says Jericho is on a downward spiral. When a man like Chris loses the spotlight they are willing to do anything to get it back. That’s why he’s putting his career on the line. No worries because at All Out, Chris Jericho’s career is over says MJF.

GOOD: Orange Cassidy makes his way to the ring to fight Jack Evans. During the entrance, Cassidy is attacked by Matt Hardy. Hardy is then ejected from the premises by the ref.

AVERAGE: The match starts and Evans takes advantage of the assault. Evans keeps momentum until a tornado DDT by Cassidy. Jack Evans ends up outside of the ring to get hit with a suicide dive. Orange Cassidy begins taunting Evans. The match begins to go back and forth until Evans executes a snap German suplex off the top rope. Momentum is back in the favor of Jack Evans. Out of nowhere, Cassidy hits an inside cradle pin for the win!

MUST WATCH: Up next, Jim Ross is in the ring to introduce Chris Jericho! The Chicago crowd serenade Jericho with the lyrics to Judas. Jericho starts by saying “Welcome to Chicago is Jericho!” He speaks about how he started his main event journey in Chicago 22 years ago. He’s also in the ring with the man that recruited him to start his main event journey, Jim Ross! Jim asks Chris why would he put his career on the line? Before answering the question, Jericho calls MJF a “piece of shit.” Jericho explains that although he’s a piece of shit, they are very similar. There are 3 dates engraved in his mind. The 3 dates that MJF beat Chris Jericho, and that’s why he had to make the decision he had to make. He says he wouldn’t be able to live with the fact that he hadn’t taken the risk, and instead settled with not being able to beat MJF. He says he’s not ready to leave! That’s why he had to take the risk. Shall something go wrong and Jericho’s career comes to an end this Sunday, he will gladly go to the commentary table and thank the fans for everything they’ve done for him… BUT, before that happens, MJF will practically have to kill him. He says MJF doesn’t have the balls to take him out, before ending the promo calling MJF a “little prick.” What a fantastic promo! The fire and intensity from Jericho make it hard to believe he will be retiring this Sunday!

AVERAGE: Up next is Powerhouse Hobbs against Brian Cage. As Hobbs is making his entrance he’s ambushed by Cage.

AVERAGE: Cage gets Hobbs in the ring to begin the match. Brian Cage steps up to Hook on the outside. As he enters the ring, Hobbs takes control of Cage. The two behemoths begin to go back and forth before Hobbs takes back the momentum. After a lengthy assault on Cage, Cage hits a flatliner to come back. The two now go back and forth. Hook distracts the ref so that Hobbs can send Cage into a championship to the head by Ricky Starks. Hobbs hits his finisher Town Business for the win. This was an average entertaining match.

GOOD: QT Marshall is in the ring with the entire Nightmare Factory. He calls out Paul Wight to the ring. Wight is outnumbered 6 to 1. The factory jump Wight for a second before he powers out. Wight delivers K.O punches and Choke-slams to destroy The Factory. The Gunn Club comes out to pretend to have Wight’s back. As they hold down the ring, Billy Gunn hits Wight with a chair to the hip, and then to the head. The Factory enters the ring again for Marshall to execute a cutter, standing tall over Paul Wight.

GREAT: Tony Schiavone is backstage with Britt Baker. Britt announces Jamie Hayter and Reba will be in the women’s casino battle royal. She also teases the signing of the hottest free agent in wrestling, before saying it was herself. She’s signed a multi-year deal. Yeah, yeah, yeah, Britt. We know Adam is coming.

GOOD: Up next is Tay Conti against Penelope Ford. Conti has all the momentum as the match progresses. She attempts high-flying offense before Ford stops her in her tracks. Penelope Ford now has the momentum. Tay Conti hits a diving crossbody to take back the momentum. Ford attempts a Muta Lock but Conti reverses into a calf slicer. Tay Conti attempts DDTay but Ford counters to a gut buster, but a near fall! The crowd gives a “this is awesome” chant. Conti secures the victory over Ford. Very decent and entertaining matchup.

GOOD: While Conti was celebrating she was assaulted by Ford and The Bunny. Anna Jay returned to fend off the assault on her best friend.

GOOD: Alex Marvez is backstage with Thunder Rosa. Before Rosa can speak she’s approached by Jade Cargill and Nyla Rose. Thunder Rosa is then assaulted by both Rose and Jade.

MUST WATCH: Up next is the main event of the evening. Jurassic Express and The Lucha Bros against The Elite. The matchup begins with Luchasaurus and Doc Gallows. Gallows and Luchasaurus engage in a fistfight before trading maneuver attempts. Doc Gallows tags in Nick Jackson while Luchasaurus tags in Rey Fenix. Nick and Fenix know each other so well that everything attempted was scouted. Both men tag out to Matt Jackson and Penta El Zero Mierdo. Matt and Penta go back and forth until Jungle Boy is tagged in. The Elite then takes turns tagging in and out, bringing the fight to Jungle Boy. After being man-handled Jungle Boy finds Fenix for a tag. Fenix hits some amazing athletic offense on Nick before Penta joins the fray. Both members of The Young Bucks and The Lucha Bros exchange some amazing offense leaving all 4 knocked out. The fans erupt! Jungle Boy is tagged in and goes for a fly to the outside wiping out Gallows and Anderson. The Young Bucks attempt BTE Trigger on Fenix but it’s reversed. Fenix hits a double cutter on The Bucks. He then attempts a flying crossbody but is caught in the air for a Meltzer Driver. The Elite picks up the win.

MUST WATCH: After the match, Kenny Omega comes out and directs traffic. The Elite executes an all-out assault on Jurassic Express and The Lucha Bros. Christian Cage runs out in an attempt to help fight off The Elite. The numbers game is massive and Christian is immediately destroyed. Kenny Omega directs Don Callis to lower the steel cage. The Elite handcuff The Lucha Bros and destroy them with kendo sticks. Kenny directs The Bucks to shift attention to Christian. Omega and The Bucks execute a triple BTE Trigger on Christian to stand tall and end the show! Wow, this post-match beatdown was amazing. Knocked off two birds with one stone furthering the story with The Young Bucks/Lucha Bros and Kenny Omega/Christian Cage.

What a fantastic go-home show! The storylines running for All Out were advanced near PERFECTLY. The action for the most part was amazing. Loved the fire from the roster tonight, truly felt as though there’s something to look forward to this Sunday Night. Everyone was superb! A fantastic episode of Dynamite! Something that can be improved on going forward is fewer pointless interviews. Was the Britt Baker interview truly necessary? Or Thunda Rosa being assaulted backstage? This precious time can go to matches such as Will Hobbs against Brian Cage. There are matches that have potential, that doesn’t end up delivering.