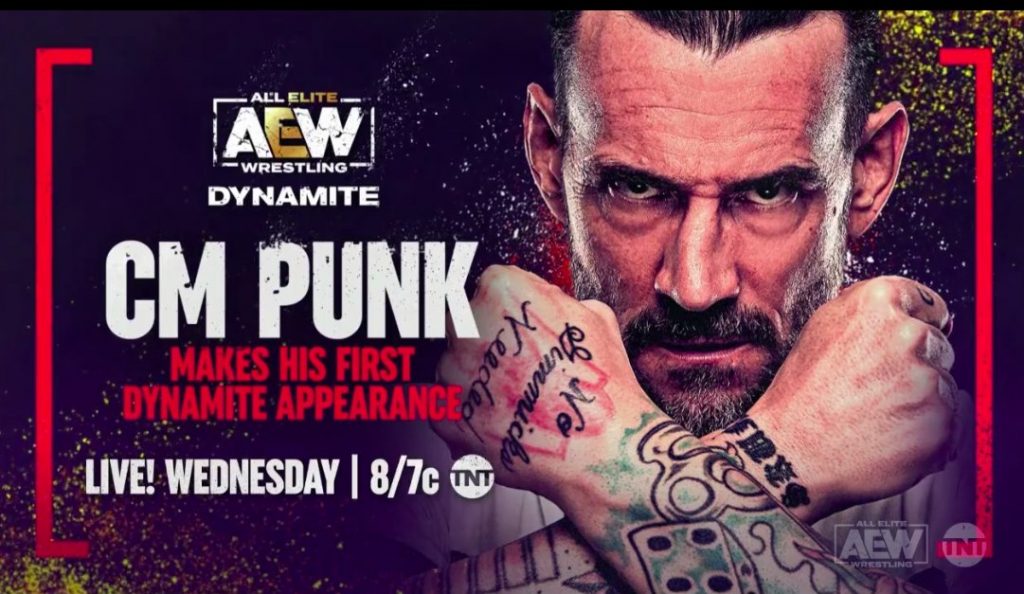 After one of the wildest nights in recent history, CM Punk is back in professional wrestling. Oh, and he’s All Elite! What will CM Punk have to say when he addresses the fans of AEW? Plus, what lies ahead for Christian Cage and Kenny Omega following last week’s assault? We witnessed Kenny leave Christian lying where he stood with a One-Winged Angel. We’ll find out a lot tonight on Dynamite.

GOOD: The show starts with Orange Cassidy against Matt Hardy. Cassidy begins to lightly kick Hardy’s legs. Hardy does the delete gesture every time Cassidy kicks him. Matt Hardy mocks Cassidy by putting his hands in his pockets. Hardy takes money out of his pockets and flaunts before Cassidy sends Hardy reeling to the outside. Cassidy attempts a suicide dive only to be caught in mid-air. The matchup continues to go back and forth with both men exchanging various strikes and holds. Matt Hardy hits Splash Mountain for a near fall. The match continues to go back and forth before Matt Hardy suffers a busted face by way of a miscalculated crossbody. Cassidy hit a senton from the top rope and then attempted a Twist of Fate only to be reversed. He finally hits it only for a near fall. Cassidy finally wins by a quick rollup pin. This was a fairly decent, entertaining matchup.

GOOD: Malakai Black appears on the screen talking about Brock Anderson. Malakai says he will make Brock tell him sorry for crossing him. He’ll also take out his anger on his father Arn, Cody Rhodes, and anyone associated with Brock Anderson. The intensity from Black makes for worry for Brock Anderson, and potentially Arn and Cody.

MUST WATCH: Up next, Chris Jericho makes his way to the ring to discuss his future in AEW. The fans serenade Jericho with the lyrics to Judas. Jericho says everyone has been celebrating this big week for AEW. Everyone except for him. Jericho has been bothered by losing to MJF in the fifth labor of Jericho. He addresses everyone questioning why he’d put himself through the labors. Jericho said it’s because he had to. Any chance he gets to put his hands on MJF, he will take it. Jericho proposes one more match against MJF at All Out on September 5th. He says if he can’t beat MJF he doesn’t belong in AEW anymore. So, if MJF beats Chris Jericho he will go to commentating full time because he will never wrestle in AEW again. MJF comes out and says Chris is becoming embarrassing. He says he sees right through Jericho. Jericho simply wants a “rub” from the youngest growing star in wrestling. MJF says he initially wasn’t going to fight Jericho ever again after the fifth labor of Jericho, but he accepts Jericho’s challenge for All Out. He says Jericho should reconsider because he mopped the floor with him three times. He walks off after telling Jericho he’s better than him, and he knows it. This was a fantastic segment with both Jericho and MJF delivering on the mic.

GOOD: Up next is Lucha Bros vs Varsity Blondes. The Young Bucks with Gallows and Anderson come to watch. Rey Fenix begins the match with Griff Garrison. Garrison and Fenix trade-off impressive athletic reversals before tagging out to Pillman Jr. and Penta. Penta does his signature zero mierdo taunt but gets pushed back by Pillman. Penta eats a superkick by Pillman. Fenix gets tagged in and the Lucha Bros take momentum with tag team offense. Momentum shifts for the Varsity Blondes as Garrison is tagged back in. The Blondes isolate Fenix to their side of the ring for a few before Fenix can tag Penta. Penta felt the momentum of the Varsity Blondes before fighting out to tag Fenix back. Fenix begins to execute some acrobatic offense. The match continues to go back and forth until the Lucha Bros pick up the win by an assisted pile-driver. What a fast-paced, entertaining matchup.

AVERAGE: Up next is Jamie Hayter against Red Velvet. Red Velvet fires out of the gate with strikes to Hayter. Hayter enforces her will over Red Velvet before Velvet sends Hayter to the outside for two suicide dives. Momentum turns when Hayter sends Velvet into the ring post. Britt Baker begins to attack Red Velvet on the outside before sending her in. Hayter continues to power Velvet around by tossing her from the stage to the barricade. The match begins to go back and forth until Red Velvet missed a moonsault. Hayter takes advantage with a vicious lariat for the win. This match felt like a squash match with flurries in between. This match had two things that took away from a better review. It felt like Velvet never stood a chance, and the missed moonsault at the end wasn’t clear whether it was a botch or done purposely.

AVERAGE: After the match, Britt Baker and Jamie Hayter continue to beat down Velvet. Kris Statlander comes to fend off the beatdown.

AVERAGE: The Dark Order is standing by backstage. The members appear to be having issues with each other. Alex Reynolds and John Silver proceed to walk away from the rest of the group.

MUST WATCH: Up next, Tony Schiavone introduces CM Punk. CM Punk makes his way to the ring to address the AEW crowd. The ovation for Punk is yet again massive. Schiavone asks Punk what is the one thing that brought him back to the ring here at AEW. The ovation is so massive Punk tells Schiavone he can’t hear him. Tony asks Punk the question again. Punk then answers by listing names such as Penta, Jungle Boy, and other young talents. He says before he can get to them, he’s here for Darby Allin. Darby makes him raise the question, “can CM Punk still go?” Punk says when he looks at Darby he sees himself. If he’s going to answer the tough questions to his-self, such as can he still be the “best in the world” he has to beat Darby Allin at All Out. The crowd erupts into a “yes” chant before CM Punk teases by saying “be patient.” He proceeds to shout out his wife before celebrating with the crowd and heading back.

GOOD: Miro is backstage. He apologizes to Fuego Del Sol for accusing him of taking the easy way to AEW. He then says now his attention is set on Eddie Kingston. God will back him because he is the redeemer. Miro wants the Mad King.

AVERAGE: Up next is Darby Allin, Jon Moxley, and Eddie Kingston against the Wingmen. JD Drake begins the match against Darby Allin. Darby has momentum until JD Drake tags to Ryan Nemeth. Eddie Kingston is tagged by Darby. After getting the upper hand on Ryan Nemeth, Eddie tags Moxley, and Nemeth tags Cezar Binoni. Moxley takes the fight to the Wingmen. The Wingmen begin to dominate Moxley before Eddie Kingston tries to help out. The Wingmen continue to tag in and out, keeping the momentum rolling. Moxley finally tags out to Kingston. Eddie brings the fight to JD Drake before a quick numbers game sets him back. Darby Allin is tagged back in before facing the numbers game as well. Kingston and Moxley isolate Binoni and Nemeth so that Allin can hit the coffin drop on JD Drake for the win!

SATISFACTORY: When Darby Allin is celebrating, he gets attacked by Daniel Garcia. Moxley and Kingston run in to fend Garcia off.

AVERAGE: Alex Marvez is backstage with Tay Conti. Before Conti can speak the Bunny interrupts. She proposes Conti join HFO. Conti rips the paper and then a brawl ensues.

GREAT: Kenny Omega is on his way to the ring to speak to Tony Schiavone. Don Callis snatches the microphone from Schiavone before he can even say anything. Callis says at All Out, they will take out Christian Cage once and for all. Christian comes out to the stage. Christian says the fans don’t believe the bull crap coming out of Callis’s mouth. Christian plays an old video of Callis and Omega, and proceeds to call Callis a “piece of shit.” Kenny Omega tells Christian the video proved nothing except the fact that Kenny was a better athlete at 10 years old than Christian was at 20. Don Callis tells Christian that when he stands against Kenny Omega at All Out, he’ll be what he’s always been his whole life. Second best. A brawl immediately ensues as Kenny and Brandon Cutler assault Christian. Frankie Kazarian comes out to fend off Omega and Cutler.

GOOD: Moxley is backstage and begins talking about Kojima Satoshi. Moxley says the public execution of the NJPW legend takes place at All Out on September 5th.

SATISFACTORY: Up next is the Nightmare Factory against the Gunn Club. Billy Gunn and Nick Comoroto start the match. The Nightmare Factory controls the momentum of the match. It is all Factory for quite a while. Colten Gunn is tagged in and brings the fight to the whole Factory. QT Marshall gets distracted by Paul Wight from the announce table, where Colten took advantage to roll QT up.

GOOD: Arn Anderson is backstage and says Brock is hard-headed. He is an Anderson and he will go down with him every step of the way.

GOOD SQUASH: Up next is Malakai Black against Brock Anderson. Brock immediately takes down Black. The flurries don’t last long as Black rattles Anderson with a knee strike. Malakai proceeds to assault Anderson with strikes in the corner. Black drags Brock so that Arn can have a closer look. Black demands that Arn throws the towel in, but Brock fights back very briefly. Black hits black mass and it’s lights out for Brock. Black doesn’t pin immediately. Black finally pins and gets the win.

GREAT: Arn Anderson enters the ring to help Brock when Malakai re-enters with a chair. Malakai throws the chair and attempts black mass but Arn blocks it. Black proceeds to low-blow Arn and then hits black mass. Lee Johnson comes out to the ring and Black exits to end the show.

Chris Jericho and MJF were completely remarkable in their segment. It felt like two men that genuinely hate each other, and want the feud to end once and for all. Kenny Omega and Christian continued to almost perfectly build for All Out. The ovation for CM Punk was amazing to see. His mic work has not skipped a beat. Fantastic promo from Punk. All in all this episode was solid! The only thing stopping this episode of Dynamite from receiving a higher rating is the fact that a few matches felt lackluster. The show was amazing from a segment standpoint, however, matches such as the Gunn Club vs The Factory, and Jamie Hayter vs Red Velvet hold this show back from its full potential.