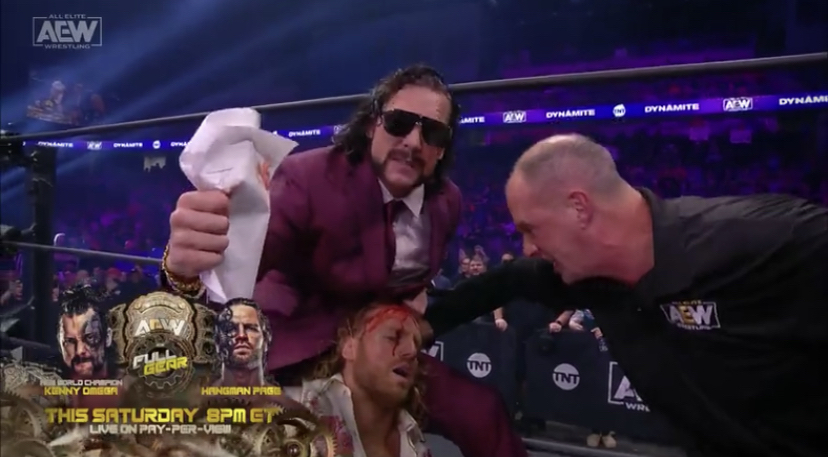 It’s Wednesday and you know what that means! The Full Gear go-home show is live tonight. What will happen as Kenny Omega and Hangman Page sign the contract to make their match official? Also, what’s next for CM Punk and Eddie Kingston? I look forward to tonight’s AEW Dynamite, do you?

GREAT: To begin the show Bryan Danielson makes his way to the ring for his matchup against Rocky Romero. The two engage in a technical back and forth encounter where both men show off their technical techniques so to say. From limb targeting to submissions to unique submission counters, Danielson and Romero delivered what you would expect out of them. Couple the masterclass of technicality with a slugfest including yes kicks, forearm/elbow strikes, and kicks — PLUS, explosive moves such as suicide dives, German suplexes, sliced bread, and plenty more, and this match was a classic. Danielson defeated Romero with the tequila sunrise submission.

GREAT: Up next Tony Schiavone is in the ring to introduce The Inner Circle. As they are making their entrance America’s Top Team attacks them. Junior Dos Santos gave Sammy Guevara a gut punch, Men of the Year threw Santana into the steel steps and the other members of Inner Circle were whipped with a kendo stick by Dos Santos. To add icing to the cake Dan Lambert power-bombed Chris Jericho from the top rope through a table. To conclude… Dan Lambert put Chris Jericho in the Walls of Jericho for their satisfaction. In the background is Ethan Page talking saying they’ve only shown a glimpse of what they can do. America’s Top Team is standing tall while The Inner Circle is laid out around and in the ring.

GOOD: Dr. Britt Baker, D.M.D, Jamie Hayter, and Rebel make their way to the ring for a three-on-three against Tay Conti, Anna Jay, and Thunder Rosa. The two trios immediately begin brawling to start the match. After multiple instances of back and forth action and shenanigans, Tay Conti executes TayDT on Rebel for the win.

GOOD: Jungle Boy is out to the ring for a match against Anthony Bowens. This was a match of speed and technique against power. After going through damn near a handicap match having to worry about both Bowens and Caster, Jungle Boy won via submission. Jungle Boy hit the snare trap for the win.

AVERAGE: After the match, Bobby Fish ran out and attacked Jungle Boy. He beat down Jungle Boy for a little while before being fended off by Christian Cage and Luchasaurus.

SATISFACTORY SQUASH: Wardlow is facing Wheeler Yuta. This match was roughly 3-5 minutes of Wardlow obliterating Yuta. Wardlow hit 4 powerbombs among his dominance of Wheeler Yuta to get the win.

GOOD: After the match, Orange Cassidy and Chuck Taylor were checking on Yuta before being attacked by HFO. Hardy wrapped a chair around Cassidy’s neck and hit the twist of fate to end this segment.

GOOD: CM Punk and Eddie Kingston are in the parking lot being separated from a brawl. The two jaw off at each other while being held back and attempting to break through at the same time.

GREAT: It’s Matt Sydal and Lee Moriarty against Lio Rush and Dante Martin. Martin and Moriarty begin the match with athletic and acrobatic reversals and maneuvers. After a back and forth and a standoff Lio Rush and Matt Sydal are both tagged in. Lio and Matt also share their awesome athleticism. The two teams erupt into a brawl before settling down. This would ensue into a “spot fest” for lack of a better term that was amazing to watch. Each man showed their creativity and athleticism and speed to make for an amazing match-up. Lio Rush and Dante Martin came up with the win.

MUST WATCH: Up next it’s PAC against Dax Harwood. Dax and PAC engage in a technical yet athletic and physical exchange. Reversals, strikes, and holds from everywhere you could look followed by a stand-off called for a “this is wrestling” chant. This match had everything you could want in a match. Intensity, hard-hitting action, great physicality, technical holds, brain busters, and much much more. The toughness and resiliency of Dax and PAC were tested. After a fantastic and brilliant matchup, PAC was victorious by submission with rings of Saturn.

GOOD: As PAC was celebrating Cash Wheeler attacked him from behind. FTR was attacking PAC until the lights cut out. When they came back up Andrade and Malakai Black were in the ring with FTR. The 4 on 1 assault commenced before The Lucha Bro’s and Cody Rhodes stormed the ring. Cody and Death Triangle cleared the ring and stood standing tall.

GREAT: Tony Schiavone is in the ring to monitor the AEW Championship match contract signing between Hangman Adam Page and Kenny Omega. Schiavone gives Page the contract to sign first. Hangman says the sooner he signs the sooner he could get to Full Gear and beat Omega’s ass. Page proceeds to sign before passing the contract to Omega. Kenny Omega says he wishes he could share the enthusiasm of Hangman and the crowd. Instead, he’s sad for Hangman. They used to be friends. Omega says Hangman talks a lot about cowboy life but tells Hangman that they know it wasn’t him who picked him up from insecurity and sorrow, it was The Elite. Hangman says Omega has lied to him a lot specifically at Full Gear last year when Omega beat Hangman in the World Title Eliminator. He told Hangman good job and that he was proud of him, but he was scared of Hangman. The two have a handshake to close out the segment until the cameraman hits Hangman with the camera. It turns out to be Don Callis. The camera shot to the head split Page open and Omega signed the contract with hangman’s blood.

Dynamite continues to get better as the weeks go by. I’ve been enjoying what I’ve been seeing the last few weeks with the focus being on furthering stories and delivering with action. PAC and Dax Harwood may have stolen the show with a classic but it wasn’t easy. Bryan Danielson and Rocky Romero was a great match as well as Lio Rush/Dante Martin vs Matt Sydal/Lee Moriarty. Kenny Omega and Hangman were also fantastic tonight successfully drawing interest for Full Gear. This was a good show.