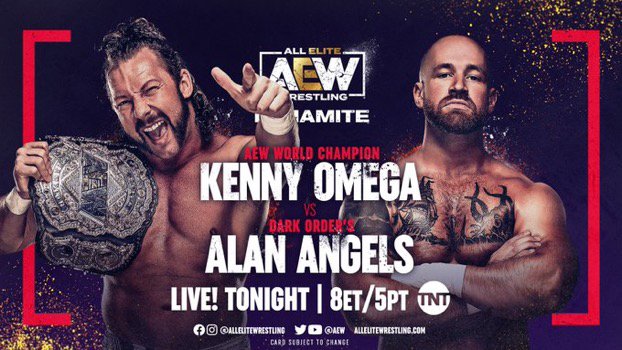 It’s Wednesday and you know what that means. AEW Dynamite is live tonight with Kenny Omega vs Alan Angels being the featured matchup. How will AEW further the story of Omega and Hangman? Also, we wish Jon Moxley the best of luck and the utmost positivity. What’s next for the AEW Title Eliminator? We’ll find out tonight on Dynamite.

GREAT: The show begins with Kenny Omega taking on Alan Angels. Angels came straight out of the gate with a missile dropkick. He fired off on Omega in the corner with punches. Omega fights off Angels and takes control of the match. They go back and forth until Omega hits a Kotaro Crusher for a near fall. Once again the action goes back and forth until Kenny sizes Angels up for V Trigger. Kenny attempts V Trigger but Angels evaded. Angels fights off Kenny and sends him outside for a Suicide Dive! Alan Angels eventually got Omega in position for a Frog Splash. Kenny got his knees up! Angels gives Omega a fight for a while before Omega attempts One-Winged Angel. Alan Angels reverses to a roll-up. Omega then rattles Angels with V Trigger before hitting 2 more for the win.

GREAT: After the match, Kenny Omega grabs the mic and talks about how Angels has embarrassed him and ruined his career. He says just as he has the power to give he also has the power to take. Kenny tells Nakazawa to hand him a chair and appears to hit One-Winged Angel on the chair. Hangman Adam Page comes out to save Angels. He attempts to Buckshot Lariat but Kenny ducks under and escapes the ring. Hangman tells Kenny to hold tight onto the AEW Championship because he has 10 days.

AVERAGE: Malakai Black is shown in a video package talking about Tony Khan’s decision to ban him from ringside for Cody vs Andrade. Black says Tony’s decision won’t affect the outcome of the match.

GREAT: Up next CM Punk comes out to the ring to address the AEW crowd. The crowd is massively chanting CM Punk until Punk says that isn’t the name he wants to hear right now. He says two people aren’t here tonight. One of them has a legitimate reason and his name is Jon Moxley. That’s the name he wants to hear chanted right now. Punk knows what it’s like to go through things and have to feel tough, and eventually have to remove yourself from the “hamster wheel.” He wishes the best for Jon Moxley. Punk then says the second guy not here is Eddie Kingston. Eddie Kingston has fabricated some story about a past beef between the two that is false. Punk says Eddie Kingston has cost fans possible matches in the eliminator tournament because he was planning on filling the void after confronting Eddie. Therefore he’ll find out what type of man Kingston truly is this Friday on Rampage.

GREAT: Adam Cole and The Young Bucks are standing by backstage with Alex Marvez. Adam Cole says at Full Gear he and The Young Bucks will prove why they are the best. Nick Jackson adds on by saying they aren’t afraid of no one. Christian Cage walks up to The Elite. Matt Jackson tells Christian to tread carefully because he’s outnumbered. Luchasaurus comes from behind Matt. The 2 teams begin brawling and take it to the stage. After a chaotic brawl eventually including Jungle Boy, Christian Cage would hit con-chair-to to Adam Cole to end the segment.

AVERAGE: A video package of Ruby Soho and Kris Stadtlander aired. Ruby says Stadtlander may be her toughest opponent to date. She’s very nervous. Stadtlander says she’s known Ruby probably longer than Ruby has known her. She’s been ready for this match for a while.

GOOD: Up next is FTR against Aero Star and Samuray Del Sol for the AAA Tag Titles. FTR gains control out of the gates but Star and Samuray keep up. They execute great high-flying offense and keep FTR reeling for a while. After multiple back and forth exchanges including Dax Harwood hitting Aero Star with a brainbuster outside; Cash wheeler pins Samuray Del Sol while using the ropes for the win.

AVERAGE: A clip from last week is aired of Hikaru Shida after her win against Serena Deeb. She’s given her 50th win plaque but is cut off by Nyla Rose and Vickie Guerrero. Nyla says Hikaru has hit a massive road bump because next, she faces her.

GOOD: The Inner Circle makes its way to the ring. Chris Jericho is about to announce which members of America’s Top Team they will face at Full Gear. Dan Lambert comes out with America’s Top Team. They send the contract to Inner Circle and tell them to make it fast because they don’t want to be in this town. The Inner Circle select Junior Dos Santos, Andre Orlovsky, and DAN LAMBERT to join Men of the Year in the matchup. The segment ends with Lamber losing his mind.

AVERAGE: Up next is Anna Jay against Jamie Hayter. Anna and Jamie go back and forth. Hayter is sent into the steel barricade outside by Anna Jay. As Anna Jay tries to re-enter the ring she’s met with Hayter’s big boot. Hayter enforces her will over Anna Jay and keeps the momentum. Anna Jay starts to fight back and hits a DDT on Hayter for a near fall. After more back and forth Britt Baker distracts Anna Jay to allow Hayter to hit her lariat for the win.

AVERAGE: After the match Rebel, Britt, and Hayter attack Jay. Tay Conti and Thunder Rosa come out to fend them off.

AVERAGE: Lio Rush and Dante Martin are standing by backstage. Matt Sydal and Lee Moriarty are also there. Lee and Matt challenge Lio and Dante to a match in the future. Dante and Lio accept the challenge.

GREAT: MJF comes out to address Darby Allin who is sitting in the bleachers. He says all games aside he and Darby know they both will be legends and end up being some of the greatest there is. MJF says the other 2 pillars are good but they are no MJF or Darby Allin. He questions why with those being the facts the fans boo him and cheer Darby. He says the reason why Darby won’t beat him is that he will lose his cool. Darby says he will have himself controlled come Full Gear. Why? Because Darby will unleash his anger right now. Darby makes his way down the stairs through the fans. MJF runs towards the ramp where he’s met by Sting and an army of mysterious people. Wardlow and Shawn Spears tried to help but they were outnumbered. MJF realized he couldn’t run or hide and charged Darby. The two brawled through the fans and back to ringside before MJF finally scathes away.

MUST WATCH: Up next is Andrade vs Cody Rhodes. They go back and forth until Andrade staggers Cody by pushing him off the top rope to the outside. El Idolo continues to beat up Cody outside before sending him back in and proceeding with the momentum. Cody tries to get something going with a body slam and a couple of other moves. Andrade dazes Cody with his signature spinning elbow. This draws a near fall. After a back and forth exchange Andrade hits 2 out of 3 amigos before Cody tries to fight back. He successfully hits the third amigo/suplex but on the turnbuckles. This allows Andrade to hit his running double knees in the corner. Another near fall. Cody eventually attempts a figure four but Andrade counters it into a figure four of his own. Rhodes flips over to reverse the pressure of the figure four onto Andrade. This causes El Idolo to roll under the ropes to the outside. Cody was going to attempt a suicide dive but is met by Andrade’s assistant on the apron. The slight distraction causes the ref to also be distracted so they missed FTR hitting Cody with the AAA titles in mid-air of the suicide dive. The assistance allowed Andrade to get Cody in the ring and hit his arm hooked DDT for the win.

GOOD: After the match, Arn Anderson is set to confront FTR, Andrade, and Tully Blanchard. Before anything can erupt The Lucha Bros come to the rescue. They fight off FTR and company to stand tall.

GOOD: Up next is Miro against Orange Cassidy in the semifinals of the World Title Eliminator. To start the match Cassidy tries to play mind games with Miro. He forces Miro to chase him around and when he tried to hit a suicide dive Miro caught him with a belly-to-belly on the floor. The momentum is all Miros from this point on. Cassidy attempts to fight back but is quickly put back down. After more back and forth (kinda) Miro finds himself on the table outside. Cassidy scales the ropes and dives to the outside on Miro through the table. When the fight made its way back in the ring it didn’t take long for Miro to execute his savate kick. He would follow it with his camel clutch finisher wrenched back for the win! Decent and fun main event to end the show. It will be Miro against Bryan Danielson in the finals at Full Gear.

This is again another solid episode of Dynamite. MJF was golden on the mic. The segment with Darby tonight was so good at building hype for the match at Full Gear. Hangman Page laid down the law and said Kenny Omega has 10 more days with that championship. This was following an amazing encounter between Kenny and Alan Angels. Another fantastic match tonight was Andrade against Cody Rhodes. AEW is getting better with its focus on the product. I’m seeing fewer backstage interviews and more action to truly further stories. This was all in all a good episode of Dynamite.