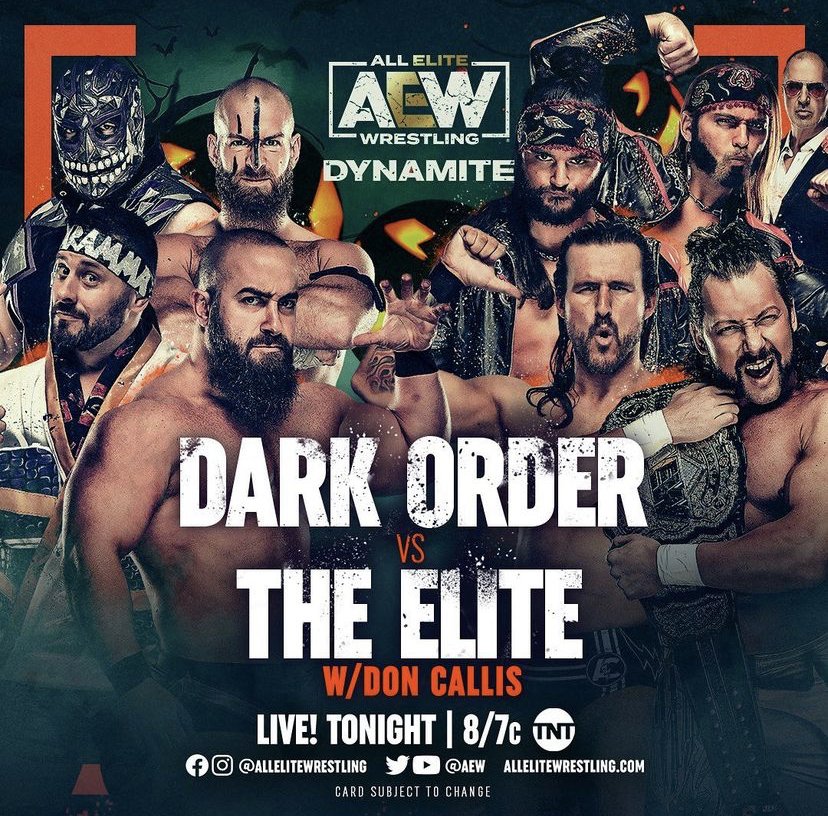 It’s Wednesday and you know what that means. Dynamite is live tonight after two weeks away from its normal Wednesday slot. The show is headlined by The Elite against Dark Order in an eight-man tag. CM Punk also goes one on one with Bobby Fish. Are you ready? I know I am.

GREAT: The show kicks off with CM Punk against Bobby Fish. This crowd is electric for CM Punk making his Dynamite wrestling debut. Punk executes a headlock takedown to start the match. Fish and Punk take turns with knee strikes. After several reversals Punk hits 3 body slams for sole possession of momentum. A failed attempt at hitting GTS allows Bobby Fish to now take control. Punk regains momentum by executing a suicide dive. Fish sweeps the legs of Punk causing him to tumble on the apron. Bobby Fish begins to target to legs of Punk inside the ring and outside. Punk fights back initiating a slugfest but Fish prevails. After fighting Fish off of the top rope Punk executes his signature diving elbow from the top. Every time Punk tries to fight back Fish is there to halt his momentum. Punk once again attempts GTS but Fish counters mid-way with a dragon screw to the leg. After a bit more back and forth Punk hits GTS for the win.

GOOD: A video clip of Malakai Black from after last week’s Dynamite airs. Black talking to Cody says he made his own family turn on him, he made the crowd hate him, and more. If Cody thinks this was about pinfalls he was dead wrong.

BAD SQUASH: MJF against Bryce Donovan is up next. MJF extends his hand for a handshake but kicks Donovan in the gut. After roughly 20 seconds MJF hits the heat seeker for the win.

GREAT: After the match, MJF says Boston is exactly how he remembers it from last time. “An absolute shit hole.” MJF bashes the women of Boston calling them disgusting bringing him to Darby Allin. He asks if Boston likes Darby? It’s fitting the fans cheer for Darby because they simply cheer for losers. MJF says Darby Allin is afraid to show back to work especially after knocking Sting with his Dynamite diamond ring. After continuing to rant Sting’s theme music plays. MJF laughs alluding to that being planned. The lights then go out for real and when it comes back up Sting is behind MJF, Spears, and Wardlow. Sting hits Spears and Wardlow with the bat while MJF runs to the crowd. A masked man behind MJF takes off his costume and it’s Darby Allin! Darby sends MJF running and then hits Wardlow with his skateboard with thumbtacks attached. He challenges MJF at Full Gear to end this segment.

AVERAGE: Tony Schiavone is backstage with Britt Baker, Rebel, and Jamie Hayter. Schiavone informs Britt about a trick-or-treat stipulation for Abadon. The treat would be a future title match against Britt. The trick is that it’s no disqualification. Britt says she’ll see Abadon on Friday.

GREAT: Up next is Sammy Guevara against Ethan Page for the TNT title. Sammy wastes no time running at Page from the ramp. Guevara dives on Page to the outside and continues to beat him up outside. They both get in the ring to officially start the match. Page and Guevara go back and forth with things ranging from reversals to some innovative offense. While on the top rope Page lifts Guevara in a sidewalk slam position and crashes him down on the turnbuckle. Momentum going forward is all Ethan Page. Guevara finally regains momentum and then hits a springboard cutter followed by a Spanish fly. Near fall! Sammy now scales the ropes… Shooting star press to a standing Ethan Page on the outside! After more back and forth Page hits a body slam from the top rope followed by a shoulder tackle. Near fall! Page then tries to hit Ego’s Edge from the top rope but Guevara counters into a hurricanrana. Page appeared to attempt it again but Guevara rolls Page up for the win!

GREAT: Tony Schiavone is standing by with Eddie Kingston and Bryan Danielson ahead of their match on Rampage. Kingston says Bryan doesn’t know what he’s talking about when he says he doesn’t work hard. He says he has been through the ringer and has to wake up every day to take medication to make sure he doesn’t do something terrible to someone. He keeps his cool because he doesn’t want to get locked up but come Friday the time for talking and listening is over. Bryan says he didn’t say Eddie doesn’t work hard. Of course, Eddie works hard but Bryan wants it more. Bryan says he’s been to similar stuff to Eddie but doesn’t complain. He admits Eddie and Moxley are two of the toughest he’s ever seen but on Friday he will beat Eddie Kingston!

AVERAGE: Tony Schiavone is backstage with The Lucha Bros. They call out FTR for claiming they’re the best. The Lucha Bro’s know what FTR wants. They want the AEW tag titles and the Lucha Bros will give them the match because they have zero mierdo!

GREAT: Up next is Hikaru Shida against Serena Deeb. Right out of the gates Deeb and Shida brawl. Serena targets the leg/knee of Shida. Shida doesn’t back down so easily as she gives Deeb her share of a beatdown too. Deeb and Shida continue to go back forth before Shida hits a vertical suplex for a near fall. Shida plants her again and then hits a shining wizard to the back of the head for another near fall! After more back and forth Shida sets up a chair on the outside to jump off but Deeb moves it. Shida doesn’t care, she jumps off of the steel steps onto Serena. Deeb is eventually able to lock in a figure four with Shida’s legs around the ring post. Shida escapes but not for long as she’s locked back in inside the ring. Rope break! After trying to get Shida to hit her with the plaque Deeb pokes Shida’s eyes and hits a roll-up. Near fall! Shida then rolls Deeb up for the win.

GOOD: While celebrating Shida is attacked from behind by Deeb. Serena Deeb practically destroys the knee of Shida with a steel chair before walking away.

GOOD: Tony Schiavone is backstage with Lio Rush and Dante Martin. Rush talks about Martin’s match against Matt Sydal for the third time this Friday on Rampage. Rush says this Friday the third time will be the charm when Dante defeats Sydal. Dante won’t be having a washed-up mentor at his corner, he’ll have the man of the hour.

AVERAGE: Up next is Jon Moxley against Dark Order’s Number 10. Moxley comes out of the gate hard with a German suplex. 10 tries to fight out of the next one but Moxley follows him to the outside. Moxley rips at 10’s mask and then bites his head causing him to bleed. 10 comes back into the ring bloody trying to fight back at Moxley but Moxley turns him inside out with a lariat. Moxley picks him up and hits a paradigm shift for the win.

AVERAGE: Tony Schiavone is backstage with FTR. FTR says of course they will accept The Lucha Bro’s challenge because they knew there’s nothing they want more than the AEW tag titles. FTR promises to prevail over The Lucha Bros before saying “top guys out.”

GREAT: Cody Rhodes is out in the ring to address the crowd. He says he has been hearing everything the fans have been saying about him. When fighting Malakai on Saturday he had thoughts of hitting a move other than the Tiger Driver ‘98. He had thoughts of turning around and chasing the AEW Championship but that would have been too easy. Not the matches but actions of turning on what he stand for. He will not take the easy way out and he will not turn. Andrade El Idolo comes out tells Cody nobody likes him. Andrade says Cody has made some stupid decisions. If Cody likes… Andrade could make him his “little bitch.” Cody and Andrade proceed to stare down before the lights go out. Malakai Black is now in the ring and he and Andrade attack Cody and Arn Anderson. PAC comes out to beat up Black and Andrade and send them fleeing.

GOOD: Dark Order vs The Elite is up next and is the main event. Adam Cole and John Silver start the match for the respective teams. After a bit of back and forth Silver tags Uno and Cole tags Matt. Kenny Omega is eventually tagged in. After several tags from both parties, John Silver takes out all members of the Elite. He runs back in the ring but is met with double superkicks from Cole and Nick. The Elite regain momentum hitting superkicks and knee strikes on all of the members of Dark Order. All the superkicks being thrown around caused the referee to accidentally get one. They form a circle around the groggy Dark Order and sandwich them using their proton packs as they are dressed up as Ghost Busters for Halloween. The Elite then hit a quadruple powerbomb on Colt Cabana on the proton packs. Hangman Page eventually comes out of his costume and beats up The Elite allowing John Silver to hit Matt Jackson with the spin doctor for the win.

This was for the most part a very fun episode of Dynamite. Sammy Guevara and Ethan Page put on an amazing match as well as Shida and Serena Deeb. MJF as usual was fantastic on the mic. CM Punk and Bobby Fish also had a really enjoyable match. I applaud AEW for fewer and quicker backstage interviews allowing more time for in-ring stuff. The Elite vs Dark Order was also fun. Hangman Page has to be the biggest babyface in all of wrestling. An overall solid episode of Dynamite tonight.