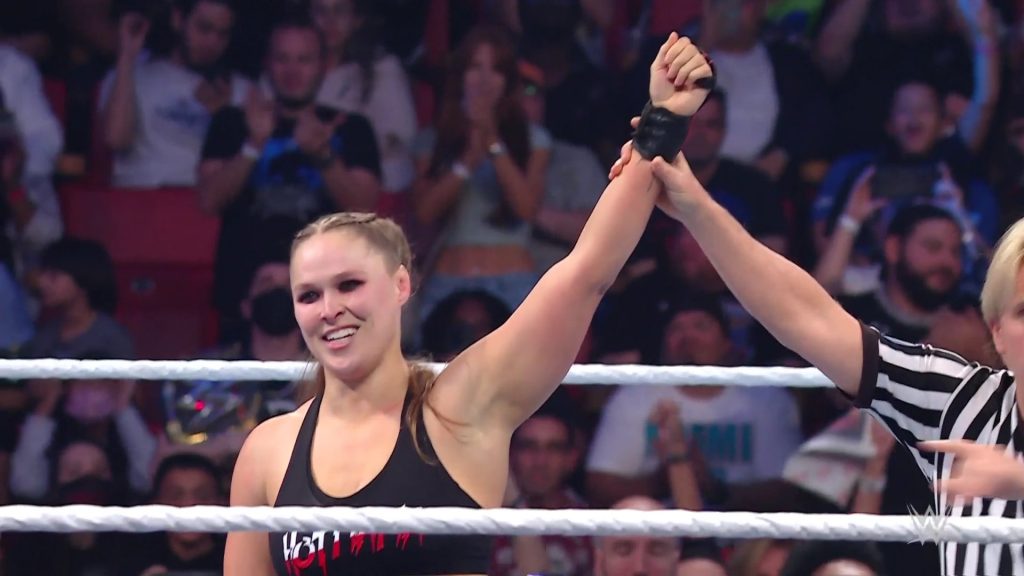 Last week’s episode of SmackDown proved to be one of the weaker episodes in recent months. While there was some fun stuff like the contract signing between Brock Lesnar and Roman Reigns, nothing else felt important or stood out in the same way, which is not a good look heading into Wrestlemania. With Sami Zayn set to defend his Intercontinental championship against Ricochet and Ronda Rousey having her first ever match on Smackdown, can the blue brand turn their misfortunes around? Let’s find out!

AVERAGE: We open the show with a round of promos from superstars like Ronda Rousey, Sonya Deville  and the Usos hyping up the show. Paul Heyman starts off hyping up Roman Reigns appearing tonight. Ronda Rousey talks about making her Smackdown debut tonight against Sonya Deville, saying that Smackdown is more than just the name of the show. Sonya retorts by saying she’s going to ruin Ronda’s debut. The Viking Raiders and the Usos cut promos hyping up their tag titles match and Sami Zayn and Ricochet do the same for their intercontinental championship match.

GREAT (TITLE CHANGE) : Up first we have the Intercontinental championship match as Sami Zayn defends against Ricochet. This match starts off electric with Ricochet getting several near falls, only for Zayn to cut him off with a half and half on the apron. This is all within the first two minutes or so mind you. This picked up to a very fun pace until Johnny Knoxville comes out and distracts Sami. This allows Ricochet to hit a spike hurricanrana for the win and we have a new Intercontinental champion!

GOOD: An angry and distraught Sami Zayn is backstage and angrily challenges Johnny Knoxville to a match at Wrestlemania.

GREAT: Austin Theory shows up on Smackdown and berates Pat McAfee. He says that he’s here on behalf of Mr. Mcmahon and reveals that he will be facing McAfee at Wrestlemania. He finishes by slapping Pat across the face and leaves.

AVERAGE: Up next is Naomi vs Carmella. This was an ok match but nothing special. Naomi picks up the win with the rear view after Sasha Banks takes out Zelina Vega with a meteora into the steps.

AVERAGE: Happy Corbin, Madcap Moss and a bunch of dudes are sitting in the backstage area playing poker. Corbin says that he’s going to beat Drew McIntyre at Wrestlemania and they make jokes about Drew being in a retirement home. This was fine but nothing special.

AVERAGE: up next is Drew McIntyre taking on Jinder Mahal. This was another alright match but again nothing special. Drew wins with the claymore. Post match he cuts a promo talking about how he’s going to obliterate Corbin at mania.

AMAZING: Shinsuke Nakamura and Rick Boogs are out next but are attacked by the Usos to make way for Roman Reigns. Roman cuts a promo about his unification match with Brock Lesnar at wrestlemania and, like last year, Vals to make a promise. He says that this year he’s going to smash and pin Brock Lesnar, hold up both titles and make Brock acknowledge him. This was really good stuff here.

GOOD: Up next is the Smackdown tag team title match as the Usos defend against the Viking Raiders. This was another solid title match on this show. The Raiders looked great in this show but in the end the Usos retained.

GOOD: Up next is Sheamus vs Big E. The match never really gets out of first gear and this felt more like an angle to further a feud. Kofi, rather impressively, plays the new day theme on the ATV’s horn but is attacked from behind by Ridge Holland with a chair. Sheamus leaves the ring and the two beat down the ATV with chairs as the two abscond with it. During the commercial, it’s revealed that they destroyed the ATV with sledgehammers.

GOOD: Johnny Knoxville has a backstage promo (yes really) and talks about how he’s done a lot of insane things throughout his career so he has no problem accepting Sami’s wrestlemania challenge. This was a surprisingly good promo from Knoxville here.

AVERAGE: Finally we have the main event as Sonya Deville takes on Ronda Rousey. This was nothing more than a Ronda Rousey showcase match and this was fine for what it was. Ronda eventually wins with the armbar. Post match Charlotte and her come to blows, resulting in Ronda making Charlotte tap out to an ankle lock to end the show.

Overall, Smackdown tonight was a considerable improvement over the last several weeks. The show kicked off with a very fun Intercontinental championship match between Sami Zayn and Ricochet which saw a new champion be crowned. The other title match between the Usos and the Viking Raiders was enjoyable as well. Roman Reigns delivered as always with an impassioned promo on Brock Lesnar. The middle dragged a little bit but overall this was definitely a big step in the right direction for the blue brand.