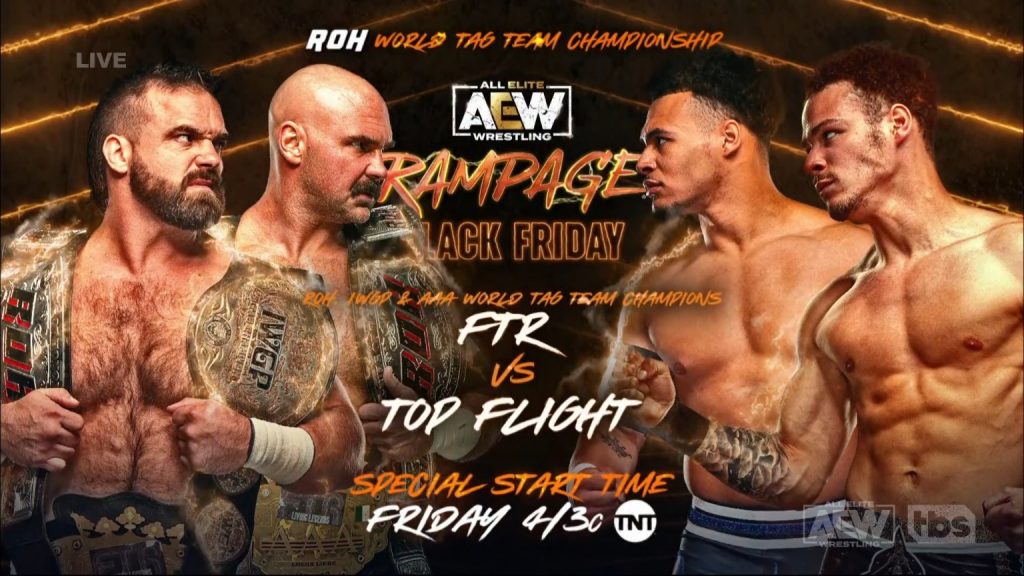 On Friday’s AEW Rampage, FTR (Dax Harwood and Cash Wheeler) will defend the ROH Tag Team Championships against Top Flight (Darius and Dante Martin). Since the AEW Battle of the Belts IV in October, this will be the championships’ eighth total defense.

In addition, Rush, The Butcher, and The Blade will face off against the Dark Order (John Silver, Alex Reynolds, and Preston Vance) in a trios battle to extend their rivalry. Additionally, Darby Allin will compete against Anthony Henry. Allin has won twice in his previous four matches, dating back to September. Most recently, he and Sting won a tag match at Full Gear by defeating Jeff Jarrett.

Former AEW Women’s Champion Hikaru Shida will be in action on AEW Rampage.

Additionally, Toni Storm, who lost the AEW Women’s Championship to Jamie Hayter at AEW Full Gear, will speak to the audience. Because Thunder Rosa had given up the title, it was revealed on AEW Dynamite that Storm’s reign had been acknowledged as an official AEW Women’s Title reign and not an interim one. Chris Jericho will be present and undoubtedly have something to say about the ROH Final Battle that will take place next month. After Jericho’s successful title defense against Tomohiro Ishii on Wednesday, Claudio Castagnoli, a former champion, smacked him.

Here is the current lineup for Friday’s AEW Rampage:

As a reminder, AEW Rampage will begin at 4 p.m. ET on Friday due to an NHL doubleheader.