10 Times Wrestlers Got Injured (While Not Even Wrestling) 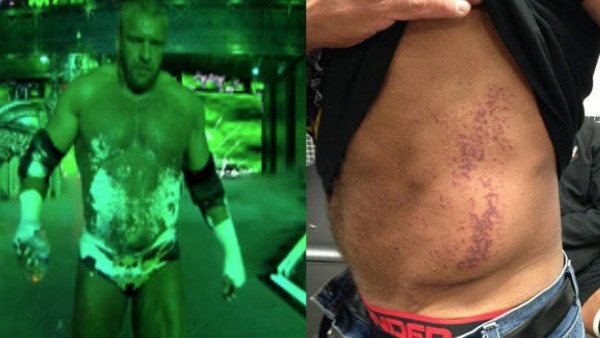 It pretty much goes without saying that wrestling is a dangerous profession, with injuries and accidents being an accepted risk of the job, to the point where its almost guaranteed that wrestlers will suffer some form of long term suffering at some stage of their careers. It’s part of what makes them extraordinary people.

Extraordinary they might be, but this doesn’t stop them from the trials and tribulations of being a regular person, and are just as susceptible to freak accidents and the subsequent injuries as us mere mortals.

Whether it’s while making an entrance, filming for TV, doing the chores, or simply trying to have a nice day out, wrestlers are just as likely to get hurt as when they’re performing in the ring. Here are 10 times they got seriously hurt while not even wrestling.

*this article contains photos and descriptions of serious injuries*

10. Sami Zayn Gets A Little Too Pumped

Dislocating your arm before one of the biggest moments of your career? Must be a conspiracy…

Sami Zayn is well known for his over the top and animated entrances, but back in 2015 Zayn got a little bit too animated on his way to the ring and unfortunately it cost him.

His injury occurred on what was Sami’s main roster debut, as he made a surprise appearance answering John Cena’s United States Championship Open Challenge. As if that weren’t big enough in itself, Zayn was also introduced by wrestling legend Bret Hart and was about to wrestle WWE’s poster boy in front of his hometown crowd, so he was understandably pumped up, excited, and full of adrenaline.

As he made his way up the ring steps, Sami punches the air pretty hard, and although it seemed pretty innocuous, he actually dislocated his shoulder right there and then. Speaking on the New Day’s Feel The Power podcast he recounted the events:

“I didn’t know what happened at the time because it happened so fast. It popped out and popped in right away. It happened so fast that I was in denial wondering if that just happened or did it just pop? Was it a crack or a pop? I didn’t even know what it was, but it scared me a little bit. When my arm went down, it was back in and everything seemed fine. It was my debut against John Cena, maybe the biggest star ever, in my hometown and I’m getting this amazing hero’s welcome. I get in the ring and I tell the ref and John Cena that I think my shoulder popped. At this point, I feel fine and we wrestle for about a minute. He gives me a back suplex and that’s when it’s out and it’s not getting back in. My arm was dead and I couldn’t roll and I think when I finally did roll, it went back in place.“

Even though he was badly hurt, Sami’s match with Cena was incredible, with him even receiving a standing ovation at the end of it from the Canadian fans. Thankfully he recovered, and he soon earned himself a permanent place on the main roster.

The 24/7 Championship is hardly the most well-contested of titles, with roll ups being the most dangerous move that anyone usually takes during those matches/segments. Somehow though, Ember Moon suffered a devastating injury that cost her a significant portion of her career, all while taking part in a literal chase for the championship, as she described to 411mania:

“And I told Truth, I was like, ‘Truth, you better run, I’m gonna catch you, Truth. If I catch you, I’m tackling you and you’re going down.’ And so when we actually did it, I literally caught them right before we went through the curtain. So they go through the curtain, and they didn’t realize how close I was behind them … So we go through the curtain. As I’m coming through, the curtain shuts, I open it, go through. Truth is dropping Carmella, and it’s like from me to you [just a couple of feet] and I’m going full speed. And I had to hit the brakes. I was just like, ‘Whoah,’ BOOM, and I felt a pop.”

It turned out that the ‘pop’ was actually Ember’s Achilles tendon completely off the bone, which happened as she persued the 24/7 Champion. It was a very serious injury that required her to undergo two bouts of surgery to recover and she ended up spending than a year on the shelf, but has recovered, and has been an active member of the NXT roster since September 2020.