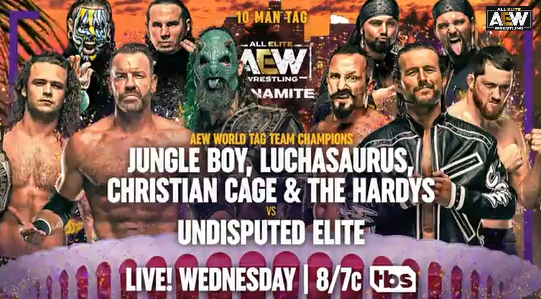 The Undisputed Elite will be in 10-man tag team action as Dynamite comes to Los Angeles for the first time.

AEW will debut in California for the first time in company history as they finally come to California on Wednesday, June 1. Californians will benefit from seeing several of their native sons in action in the exact match.

This was the only match officially announced for the card, but Scorpio Sky has agreed to defend his TNT Championship against Dante Martin in SoCal.

Cole and O’Reilly won their singles matches at Double or Nothing, with O’Reilly beating Darby Allin, and Cole defeating Samoa Joe in the Owen Hart Foundation Men’s Tournament finals.

The Young Bucks lost to The Hardys in a tag match at Double or Nothing, while Jurassic Express retained the AEW Tag titles three-way over Keith Lee, Swerve Strickland, Ricky Starks, and Powerhouse Hobbs.

Here is the lineup so far for Dynamite: